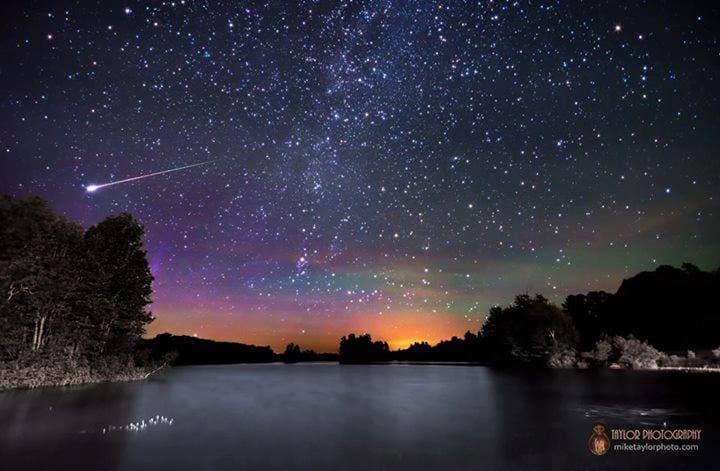 This picture is simply stunning – certainly on my list of top five nightscapes. Mike Tyalor, over at Taylor Photography, has really outdone himself on this one. He captured the Milky Way, green airglow, the Aurora Borealis, and a fireball meteor all in the same image!

Let’s start with the fireball (the very bright streak above the tree line to the left of the image). A fireball is simply a meteor with a much brighter-than-average apparent magnitude. Fireball meteors are generally larger than your classic, slender shooting star, and so they are also far rarer. If a fireball meteor explodes, it’s name changes to a bolide (that is the type of meteor that exploded over Russia).

Then there is the green airglow that is a bit closer to the horizon, adding a green shimmer to the nightscape. Airglow is caused by a variety of different processes that occur on the atomic level of Earth’s upper atmosphere. Cosmic rays and the residual effects of the sun’s daytime rays play a role in this delicate dance.

The Aurora is the pinkish glow, also near the horizon. As we all know, the Aurora is caused when charged particles from the sun, emitted as solar winds, interact with Earth’s atmosphere.

Crowning this picture is the Milky Way, seen as the bright band stretching down the center of the image.

Finally, you can see light pollution off in the distant horizon from what I believe is Palermo, Maine. I know the picture was taken from Branch Pond near that area, so I’m making an educated guess in that regard.

I hope you enjoy Mike’s image as much as I do, and if so, be sure to head over to his site to get some prints!