The Red Planet has some of the largest volcanoes known to science, but none appear to be active. Yet. 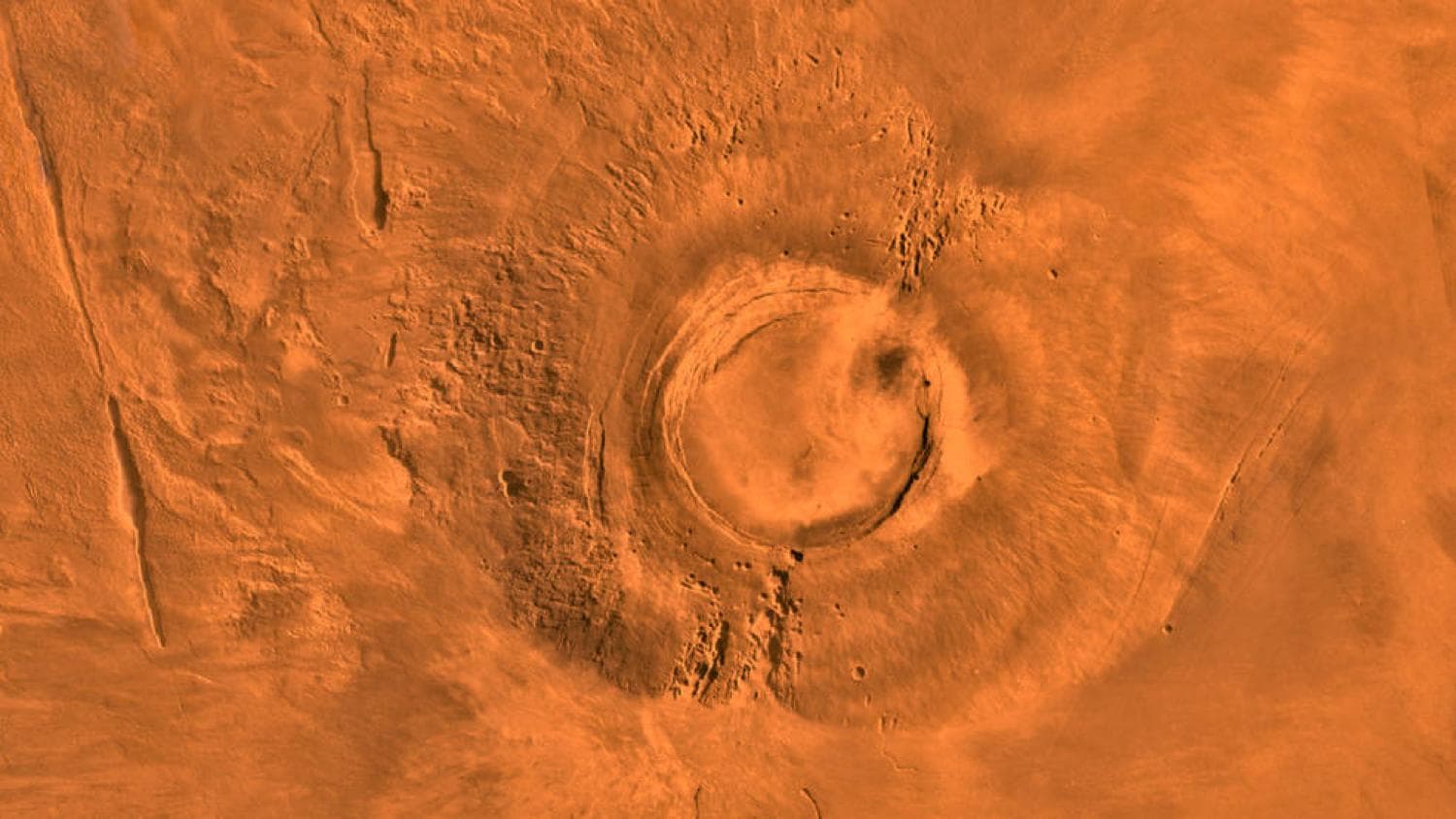 Mars famously has the largest volcanoes known to science. The largest is Olympus Mons, pictured below, which towers 22km above the surrounding plains — over two and a half times taller than Mount Everest. This extinct volcano is 640km wide even at its narrowest point, greater than the distance between London and Glasgow, or Los Angeles and San Francisco. And Olympus Mons isn’t alone in the Earth-beating stakes — three other Martian volcanoes are more than 10km high.

Mars is a small world. It is half the diameter and less than 11% the mass of Earth, so the existence of such volcanoes was particularly surprising when they were revealed by the first satellite orbiter pictures collected by NASA in the 1970s. Ever since, scientists have been keen to discover more about these towering mountains — what they are made of, when they first erupted, when they were last active, and why they grew so much larger than anything on our own planet. So how are we getting on?

Spacecraft have sent back stunning images and data about these volcanoes over the years, yielding an amazing amount of knowledge. We have learned a lot from the impact craters made by asteroids, for example, since older areas on the planet have more craters than younger areas.

From this, scientists have concluded that the volcanoes on Mars began erupting well over 3.5 billion years ago, roughly comparable to how far back eruptions go on Earth. The most recent Martian eruptions are perhaps a few tens of millions of years old. No active volcanoes have been discovered; at least not yet.

Scientists also study Martian volcanoes by examining certain meteorites on Earth. Asteroid strikes on Mars are relevant to this as well, since massive amounts of energy are released when big asteroids hit the surface. This is often sufficient to blast other pieces of rock upwards, some of which reach Earth as meteorites.

We have now recovered over 100 samples of genuine Martian space rock: the gases trapped inside them match the Martian atmosphere as recorded by the Viking and Curiosity missions. The meteorites can be examined in laboratories with state-of-the-art machines that are too large and heavy to fit on spacecraft. My colleagues and I have just published the latest such research in Nature Communications. The first detailed analysis of the eruption rates of volcanoes on Mars using Martian meteorites, it involved the Scottish Universities Environmental Research Centre, the University of Glasgow, Lawrence Livermore National Laboratory in California, and the Natural History Museum in London.

To determine when the rocks originally erupted, we used a technique known as argon-argon geochronology. This works by measuring, using a mass spectrometer, the amount of argon built up from the natural decay of potassium. It showed that the meteorites formed 1.3 billion to 1.4 billion years ago from at least four eruptions over the course of 90m years. This is a very long time for a volcano to be active, and much longer than terrestrial volcanoes, which are typically only active for a few million years.We examined six meteorites which had been found in various places over the last century, including the Egyptian desert, Indiana in the American Midwest, and the barren ice fields of Antarctica. They had been ejected into space together around 11m years ago — this is important because it means they must have left Mars following the same asteroid impact crater on the same volcano.

Yet this is only scratching the surface of the volcano, since the asteroid impact will only have excavated rocks buried a few tens of metres below the surface. When we are talking about a volcano that could be upwards of 10km tall, this only represents a very small portion of its history. It must therefore have started erupting before the 1.4 billion-year-old rocks that we have been studying were formed.

We were also able to calculate that this volcano grew exceptionally slowly — about 1,000 times more slowly than volcanoes on Earth. This again indicates that for the Martian volcanoes to have grown so large, Mars must have been far more volcanically active in the distant past. It all serves to support the previous findings I mentioned about Martian volcanoes dating back upwards of 3.5 billion years.

The other reason for the massive size of Martian volcanoes is that Mars lacks active plate tectonics. This has allowed molten rock to erupt through the same parts of the planet’s crust for very long periods. For terrestrial volcanoes, by contrast, plate tectonics moves them away from their magma sources and brings their eruptions to an end.

The last piece of the puzzle for our Martian meteorites was where they came from. By investigating NASA satellite photos we found a potential candidate: a crater large enough to have ejected meteorites into space, but young enough to be consistent with the 11 million year ejection age, and on volcanic terrain. As yet unnamed, the crater is 900km from the summit of the 12.6km Elysium Mons volcano, over 2,000km north of the present site of the NASA Curiosity rover.

Our research work has underlined the significant differences in volcanic activity between Earth and Mars, but numerous secrets about these Martian wonders remain. Scientists are still debating the mechanisms in the planet’s mantle that drive such volcanoes and keep supplying magma for eruptions in the same places for so long. The age of the most recent eruptions on Mars are also still subject to considerable uncertainty. And there’s much still to be uncovered about the links between the planet’s volcanoes and its atmosphere.

Some of these secrets will continue to be unravelled through studying Martian meteorites, satellite images and new rovers. To truly understand the largest volcanoes in the Solar System, however, we will probably have to collect pieces of our neighbouring planet through human or robotic missions and bring them back to Earth.