'Eternal Sunshine of the Spotless Mind' Pill: Would You Take It? 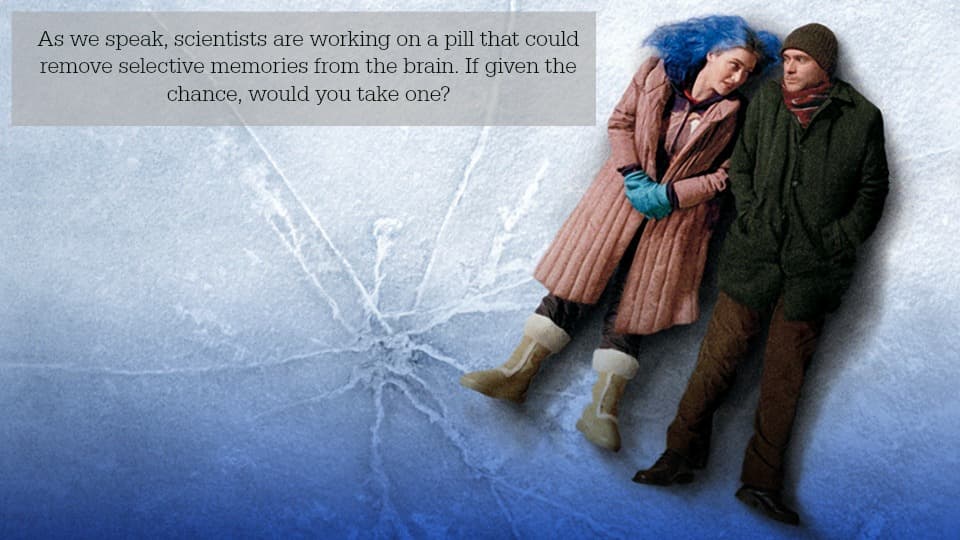 We've all heard the saying that our mistakes and experiences shape the person we are and the person we'll eventually become. I, for one, take issue with this cliche, as I know from personal experience that these things can keep us from becoming who we NEED to be.  Does that mean that I would take all of these things back if I could? Maybe. Maybe not. This point brings me to:

In the film "Eternal Sunshine of the Spotless Mind," after things go sour between the two main characters, Clementine (the female half of the twosome) hires Lacuna Inc - a company that specializes in removing targeted memories - to erase Joel, her lover, from her mind. After he learns of this, he too decides to have all of the memories he has of her wiped from his mind. A little mellow dramatic, yes? But, as we see, the mind - like the heart - is a fickle thing and the things you want to escape from seem to have a way of digging themselves out and resurfacing. I guess it's a good thing that no such technique exists, right? Or does it?

As it turns out, it may not nearly as sci-fi as you'd think. Last year, the Massachusetts Institute of Technology (MIT) announced that they have singled out the gene that plays a role in memory extinction, called  called Tet1. Memory extinction refers to the neurological mechanism the brain uses to replace old memories, like what you wore for your third grade class photo, with new ones. According to the team, they believe that if they can find a way to amplify the process Tet1 uses to work its magic, they might be able to develop a 'Eternal Sunshine' pill that could erase unwanted memories.

The progress was made when the team stuck two groups of mice in cages. One group exhibited the Tet1 gene, while the other group did not. The cages were wired to emit a weak electric shock and a scent of jasmine . During the process, the mice in both groups were naturally conditioned to associate the jasmine with the electric shock, thus they grew fearful of what came after they smelled the chemical. After several rounds of this, they spritzed the jasmine without the accompanying shock the mice were use to. They eventually outgrew their fear of jasmine, as they learned that the jasmine and the electric shock were no longer mutually inclusive.

Yet they were surprised when they learned that the group with the missing Tet1 gene behaved differently from the mice with the gene when they were put in a different cage. One group behaved as expected, with the shock association still ingrained in their psyche. Whereas the group of mice, the one WITH the gene, weren't phased after some time had lapsed. They surmised that the T1 gene eventually allowed them to replaced the fear and anxiety they associated with the shock and the cage with new warm and fuzzy memories. Only, it's a bit more complicated than that.

According to Li-Huei Tsai, the director of MIT’s Picower Institute for Learning and Memory:

[Reference: "How old memories fade away"]

Well, the researchers concluded that the Tet1 gene operates by altering the levels of DNA methylation, a modification process that essentially that controls how genes are passed on when cells. High methylation levels block the promoter regions of genes and prevent them from being turned on, while lower levels allow them to be expressed.

This mechanism also explains why some memories are more poignant than others; why we remember certain things for years and years but we forget what we had for dinner last week. It could even indicate that the past experiences of our ancestors can affect us later on in our lives.

HOW IT CAN BE USED:

This could obviously have astounding implications for the treatment of things like PTSD (Post-traumatic Stress Disorder), addiction and, perhaps most importantly, Alzheimer's disease.. Pretty much anything that involves memories, phobias or the degradation of memories.

Now, I wouldn't be doing my job if I didn't point out exactly how said discovery could  be used in a negative manner. It definitely has the potential to ruin lives and keep criminals from being brought to justice. Think about it ala "Smallville." If you see something you aren't supposed to see, TPTB could just wipe the event from your memory to keep their secret. Still, just about everything can be used by the bad guys. We shouldn't withhold technological (and neurological) advances JUST because of there is a possibility that the bad guys can do damage with it.

To conclude: Knowing that each of our experiences make us who we are doesn't always help us slay our demons, or clear the skeletons from our closet. It's just nice that we science is working on a synthetic pill that can do those deed for us. So, with that said, would YOU take the red pill, or the blue pill?

Read the full press release here or the paper here.