It's also extremely durable, and inspired by our own bones. 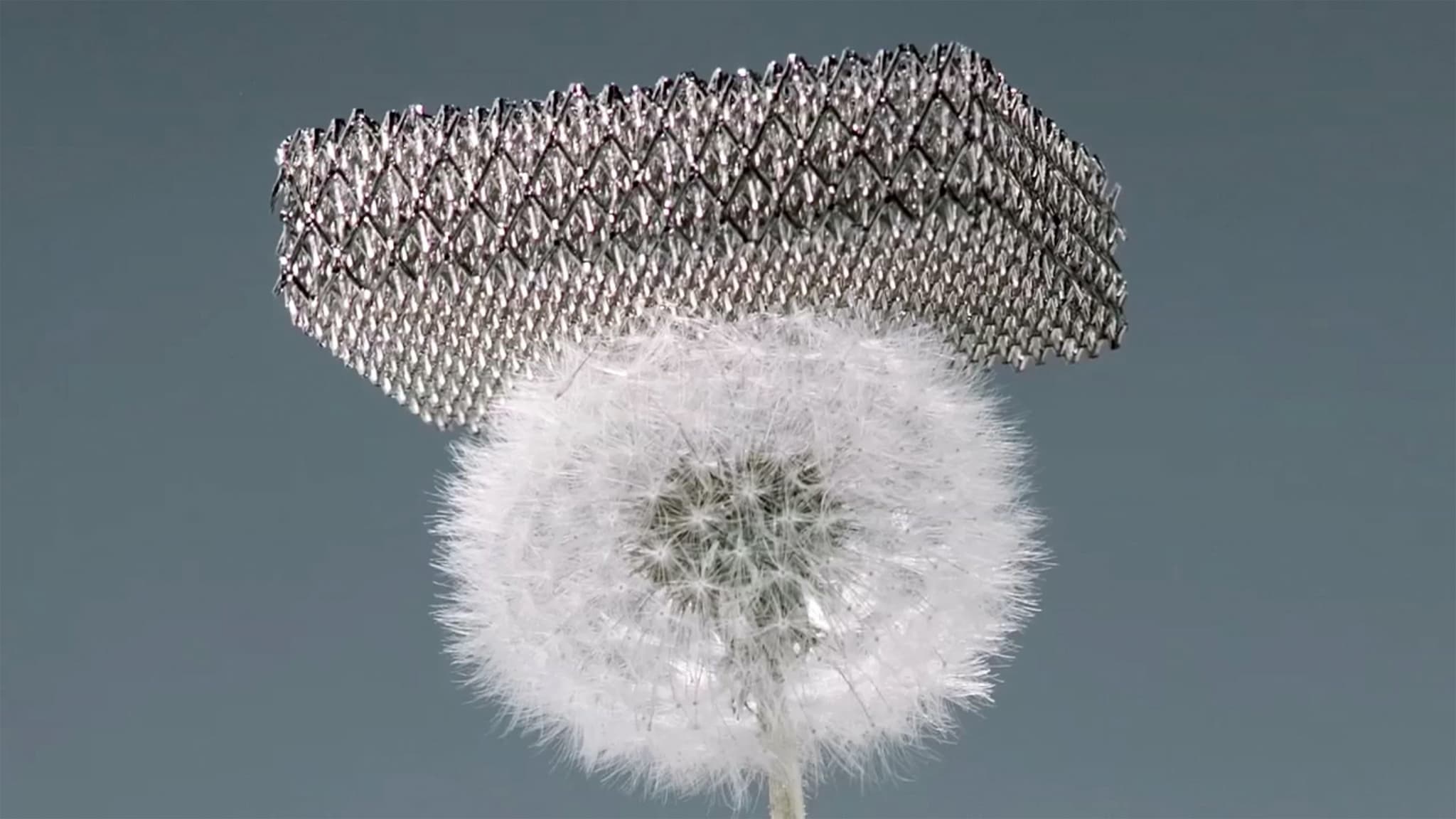 If you needed more proof of the amazing things that science can accomplish, take a moment to meet the world's lightest metal.

This material was developed in 2011 by researchers at HRL Laboratories and unveiled in the November issue of Science. The researchers worked in conjunction with scientists based at Caltech and UC Irvine in order to create this revolutionary design. Ultimately, the material is a metallic microlattice that is lighter than styrofoam.

However, unlike styrofoam, this material is amazingly durable. In fact, it is so structurally sound that an egg wrapped in the material would survive a fall from a 25 story building totally intact-- according to the design team. In relation to compression, the material is able to withstand a strain of over 50 percent. And once this force is removed, the material is able to return to its original shape, ultimately resuming 98 percent of its height.

It is so light that it can sit atop a dandelion without a single hair falling inward. The scientists were inspired to utilize the microlattice structure by, of all things, biology.

How The Material Works

Our bones are solid on the outside but rather hollow on the inside. This makes them lightweight and easy to move, and also exceedingly firm. To that end, although it has a rather rigid exterior surface, the 3D open-cellular polymer assembly means that the structure is nearly 99.99 percent air.

Dr. Bill Carter, manager of the Architected Materials Group at HRL, says that there are a number of potential applications for these microlattice materials, and draws parallels to larger structures for comparison:

“Modern buildings, exemplified by the Eiffel Tower or the Golden Gate Bridge, are incredibly light and weight-efficient by virtue of their architectures.  We are revolutionizing lightweight materials by bringing this concept to the materials level and designing their architectures at the nano and micro scales.”

One of the most likely applications for the structural components seems to be in the aerospace industry, Sophia Yang, Research Scientist at Architected Materials at HRL Labs, said in a release. In fact, the material is being put into operation for Boeing. To that end, this past week, Boeing released a new video about the material. Learn more below:

Read This Next
Autopilot
Death From Above: Boeing Unveils Autonomous Fighter Jet
Futurism
Japanese Researchers Unveil Tiny, Floating, "Firefly" Light Called Luciola
Futurism
Boeing's New Prototype Cargo Drone Can Carry up to 500 Pounds
Futurism
Boeing Is Developing Laser Pods for U.S. Fighter Jets
Futurism
Oak Ridge Just Entered Record Books With The Largest 3D-Printed Object in the World
More on Robots & Machines
Dogs With Guns
Yesterday on the byte
China Shows Off Drone That Drops Robodog With Huge Gun Anywhere
Roboforce
Tuesday on the byte
CEO Brags That Fry Cook Robot Will Replace Obsolete Human Grunts
Quacks Like a Duck
Tuesday on futurism
Watching Elon Musk's Robot Back to Back With Boston Dynamics Is... Something
READ MORE STORIES ABOUT / Robots & Machines
Keep up.
Subscribe to our daily newsletter to keep in touch with the subjects shaping our future.
+Social+Newsletter
TopicsAbout UsContact Us
Copyright ©, Camden Media Inc All Rights Reserved. See our User Agreement, Privacy Policy and Data Use Policy. The material on this site may not be reproduced, distributed, transmitted, cached or otherwise used, except with prior written permission of Futurism. Articles may contain affiliate links which enable us to share in the revenue of any purchases made.
Fonts by Typekit and Monotype.