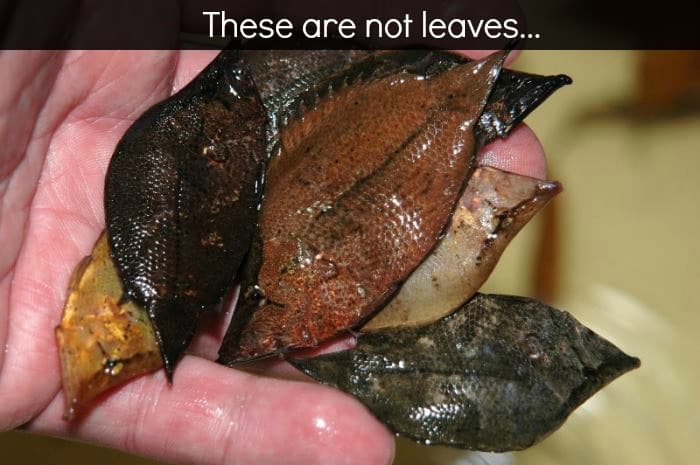 Clearly, these little guys just want you to leaf them alone, which is precisely why they have developed such a unique camouflage.

At first glance, they may look like leaves; however, if you look closely, you will see that these objects are actually much more than dried-out, dead, old vegetation. In fact, these tiny blobs are quite alive. Looking at the central figure that is of a reddish hue, you can clearly see a tiny, black eye towards the bottom of the image. Moreover, if you look at the upper portion of this object, you will see a back that is covered in sharp spines. Ultimately, these objects are fish, and their coloring and shape is structured this way because they are meant to resemble leaves that are molting.

But they don't just look like leaves; they even act like them. The fish often angle themselves facing downwards, so that they look like a dead leaf that is floating in the water. The protrusion on the end of their face (their elongated nose) adds to this illusion. It rather resembles the stem of a leaf, which completes the disguise when the fish is angled in the aforementioned downward fashion. See:

It is really a rather clever kind of camouflage, as there are very few creatures that sustain themselves on dead leaves. These clever creatures are actually called Monocirrhus polyacanthus, or South American Leaf Fish. The fish are generally found in (you guessed it) South America. Specifically, they make their homes in the Amazon River basin in Peru, Brazil, Bolivia, Columbia, and Venezuela. And although they may look rather small and unassuming, they can really be rather frightening.

You see, the camouflage doesn't just protect the leaf fish from its predators, it also allows the fish to hide so that it can sneak up on its prey unawares. In fact, the fish doesn't really have to do any sneaking at all (that's why they are camouflaged); rather, the fish simply floats in the water waiting for its prey to swim by. Once the prey gets close enough, the leaf fish turns its mouth into a virtual vacuum. In so doing, it sucks up its prey and swallows it whole. The fish is able to do this with such fineness because they have protractile mouths. This means that the fish is able to extend its mouth.

As a final point, don't fret too much about the little guys in the first image. This photograph comes from China's Council of Agriculture, an organization that is dedicated to environmental education and working towards sustainability. So the fish were likely safely returned to the water shortly after this picture was taken.

Want to see them in action? Skip ahead to 2:23 (they can swallow their prey in a quarter of a second; it's pretty cool)