Meet The Oldest Trees on Earth 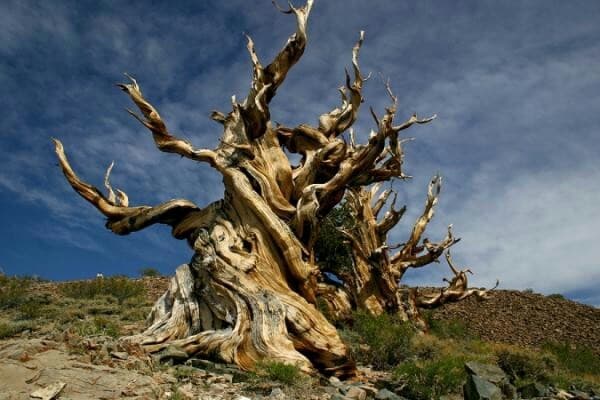 Trees are some of the oldest organisms on the planet. While our lives pass by in the blink of an eye, many trees stand as silent witnesses—watching century after century roll on. Although we can't be quite sure how old the oldest tree is (after all, we haven't tested every tree on Earth), the current list of the oldest known trees is enough to boggle the mind. These ancients make you feel like little more than a mote of dust, a trembling flame, which is blown away and flickers out in a breath.

Pictured here is a massive colony of quaking aspen; it is officially known as the "Pando tree." Informally, it is called the "Trembling Giant." These stark white trees have seen countless millennia pass; however, they are more than just old. Each tree in this 105-acre colony is genetically identical—each trunk has the exact same composition. This means that this" forest" actually consists of a single, male tree. This is because every tree is connected by a single root system.

So, just how old is this Trembling Giant? Scientists put the estimate at some 80,000 years. For comparison, when the roots of this mighty beast started digging its way down into the soil, all of our human ancestors were still living in Africa. However, some researchers assert that the Pando could be a staggering 1 million years old. If true, this means that Pando predates the earliest Homo sapiens by 800,000 years. As a final claim to fame, Pando is also the heaviest living organism on Earth, weighing some 5,900 tonnes (13 million pounds), and it has over 40,000 trunks.

Pictured here is an unassuming spruce tree known as "Old Tjikko." If you were to pass it, you might not give its spindly branches a second glance; however, this tree has quite the claim to fame: It is the oldest individual tree (tree with only one trunk) on Earth. Located in Dalarna, Sweden, this tree is a staggering 9,550 years old. The age of the tree was confirmed by carbon-14 dating, which was conducted at a laboratory in Miami, Florida.

Similar to the Pando, spruce trees can multiply by using root penetrating braches. In so doing, they can produce exact copies (clones) of themsleves. The trunk of this tree is estimated to be just a few hundred years old; however, the organism as a whole survived for so much longer due to a process known as "layering." This occurs when a branch bends down and reaches the ground, sprouting a new root. It can also transpire due to "vegetative cloning," which happens when the trunk of the tree dies but the root system lives and sprouts a new trunk.

This is the world's oldest non-clonal tree*, meaning that the trunk itself is the same age as the root system. The age is the same because, unlike the previously mentioned trees, non-clonal trees do not practice cloning (they do not reproduce asexually).  The tree is some 5,060 years old. Ultimately, this means that the tree was already nearly a century old when the first pyramid was built in Egypt. This mighty trunk can be found nestled between other millennia-old Great Basin bristlecone pines, and it is located in a grove called the "Forest of Ancients."

At 4,841 years old, Methuselah was the oldest known tree for many years. It it also a bristlecone pine. However, it was superseded by the 5 thousand year old beast mentioned above. There was a specimen that was even older than Methuselah. It was named Prometheus, and was about 4,900 years old...when we accidentally cut it down. Well, we meant to cut it down. We just didn't know that it would have been, at the time, the oldest tree in the world. It was cut down by a researcher in 1964 with the U.S. Forest Service's permission.

*The state department keeps the location of the oldest tree on lock-down in order to save the tree from vandalism. As such, the tree pictures here is a bristlecone pine, but not the oldest tree.

This tree is known as Sarv-e Abarqu, though it is also called the "Zoroastrian Sarv." Ultimately, it is a cypress tree that is located in Yazd province, Iran. The tree is estimated to be at least 4,000 years old. And I know that I keep saying this, but that means that this tree predates all of modern civilization. In fact, it is older than nearly all of recorded history (recorded history is generally dated to the Bronze Age, and the writing system that was developed sometime during the 4th millennium BCE).

This means that the tree was literally alive at the dawn of human history. Unsurprisingly, it is considered an Iranian national monument, and it is believed that Sarv-e Abarqu is, in all probability, the oldest living thing in Asia.