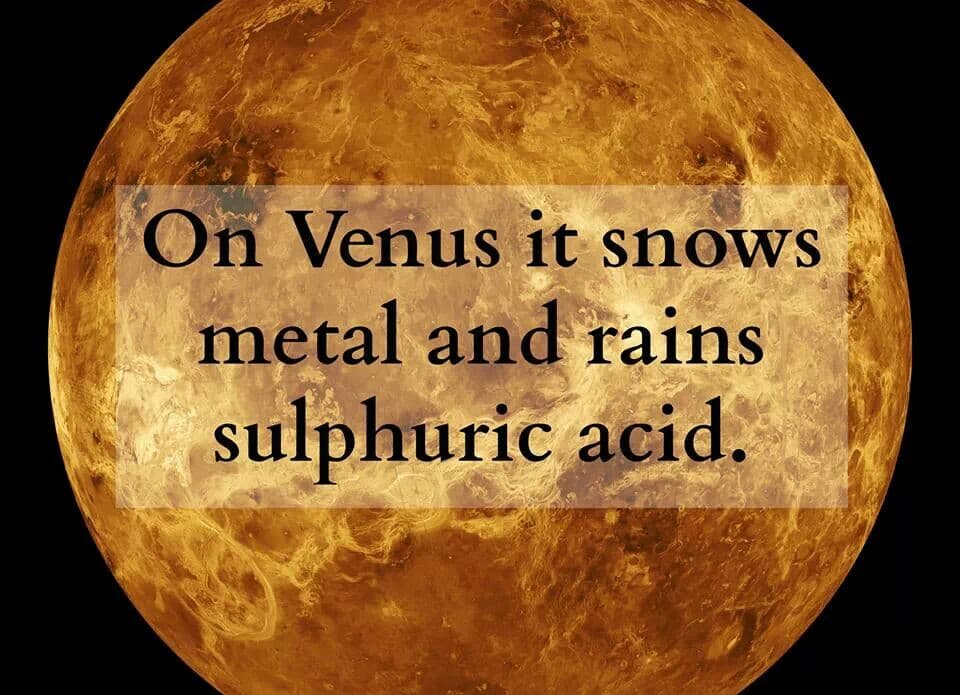 Venus, named after the Roman God of love and beauty, boasts a myriad of oddities. For one, it's the most Earth-like planet in the solar system (it's similar in size, mass, and composition); however, it is terribly unEarth-like. Similar to Earth, Venus has an atmosphere that envelops the planet. However, this is a extremely dense atmosphere that is full of greenhouse gasses. In fact, the atmosphere is so thick that is causes the surface temperatures on the planet to exceed 870 °F (465 °C), which, by the way, is hot enough to melt lead.

Ultimately, this thick atmosphere has made Venus a difficult planet to explore. First, it is extremely hard to see through the cloudy atmosphere (which can be up to 60 miles/96 km thick). Second, because of the excessive temperatures and pressures, a spacecraft does not last terribly long on the surface of this roasting world. The longest duration any of them survived for was only 127 minutes, which is still impressive if you think about all of the variables that had to be overcome. Nevertheless, because of these hazards, we know very little about the mechanisms that make this strange planet tick.

But what we do know is rather unpleasant. Aside from the temperatures pushing rather close to 1000°,  a person standing on the surface of Venus would be forced to contend with an atmosphere that is about 90 times heavier than Earth's atmosphere. This means that the pressure on the surface of the planet is about the same as the pressure found when one dives 3,000 feet (914 m) into an ocean on Earth (Fact: such pressures would, quote literally, flatten you like a pancake, which would not be a pretty sight). And that's not all, it is also believed to rain metal on this hellish world. This happens because the surface of the planet is hot enough that reflective pyrite minerals are vaporized and enter into the atmosphere, forming as a kind of metallic mist. Moreover,sulfuric acid rain has been witnessed a plethora of times on Venus.

In short, it is definitely a hostile environment; however, its not all bad. Ultimately, the planet is host to a number of awe inspiring features. Like Maxwell Montes, which is the tallest peak on Venus. It reaches an altitude of 6.8 miles (11 km), which is a full 1.8 miles (3 km) higher than Mount Everest.

These few scattered facts that we do have were mostly collected from the probes that were sent to explore the upper atmosphere and map the planet. Most of our information about Venus comes from the Soviet "Venera" program. Not only was this the first successful spacecraft landing on another planet, it remains the only space program to ever successfully land a probe on Venus and transmit data from the surface.

Although the Venera mission provided us with information about the zonal wind speeds that zoom around the planet (about 224 mph/360 kph), its chemical composition, atmospheric conditions, and surface temperatures, there are still a lot of puzzling questions we didn't get an answer to. Some of which, may remain unbeknownst to us for all of eternity.

Perhaps the oddest of all of the oddities is that, unlike its siblings, Venus spins on its axis clockwise, making it the only planet in the solar system that spins in retrograde. We don't have a great understanding of why Venus does this, but most scientists speculate that the planet possibly collided with another celestial body during its early evolutionary process (much like it is speculated that a collision between Earth and a theoretical planet named "Thea" was the catalyst for the formation of our moon).

Not only does Venus rotate clockwise, it also rotates incredibly slowly. It creates one full rotation once every 243 Earth days, while it orbits the sun in 225 Earth days. Ultimately, this means that a day on Venus is almost 20 days longer than a year.