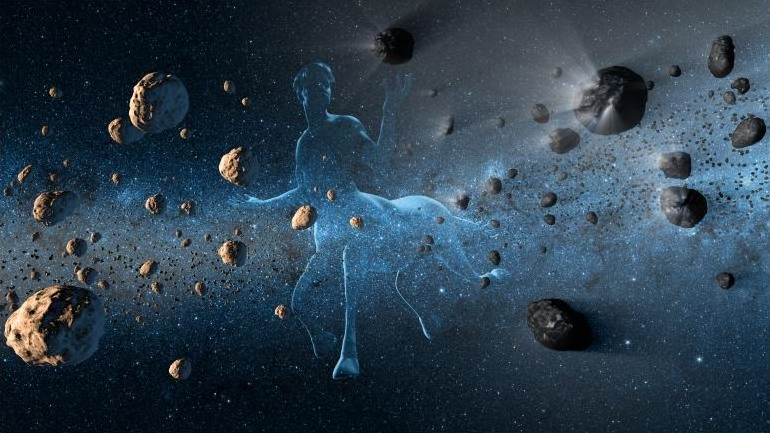 Planets, asteroids, comets – or a little of each? The centaurs are among the most mysterious objects in the Solar System. But recent surveys of the regions beyond Jupiter are helping astronomers unlock their secrets.

Centaurs are small bodies orbiting the sun between Jupiter and Neptune. They’re named for the half-human, half-horse beings of Greek mythology - an apt designation. Centaurs share characteristics with planets, asteroids and comets, and astronomers have struggled to find one classification that fits them all.

The first centaur was discovered in 1920, but it wasn’t until researchers observed 2060 Chiron in 1977 that astronomers realized that these objects constituted a distinct population, unlike any others in the Solar System. Since then, surveys conducted by the Minor Planet Center and the Jet Propulsion Laboratory’s Deep Ecliptic Survey have catalogued 474 centaurs of an estimated 44,000 such objects.

Most centaurs are too small to be observed. Even the largest are small by planetary standards, though they’re designated minor planets and also asteroids by the Minor Planet Center and other institutions. The largest, 10199 Chariklo, is about 250 km in diameter, followed by Chiron, at 220 km. These large centaurs have been directly observed, but much of what astronomers know about them comes from spectral analysis and occultation – what happens when a centaur passes in front of a star and dims it briefly.

Where Are Centaurs From?

Centaurs inhabit that complex and dynamic region between Jupiter and Neptune, the Solar System’s frontier, where ancient remnants of the system’s protoplanetary disc circle the Sun in orbits that can be relatively stable, like planets, or extremely eccentric, like comets.

Centaurs orbit the Sun on a path that takes them across the major axis of Neptune’s orbit between Neptune and Jupiter. This path can be perturbed by the gravitational effects of Jupiter and other bodies, though, and those effects can push centaurs into elliptical orbits that take them closer to the Sun.

Centaurs cam interact with other Solar System objects, too. Some astronomers speculate that Saturn’s little moon Phoebe might be a captured centaur. And as asteroids or comets, centaurs may have collided with inner system moons and planets, including the Earth.

Are Centaurs Planets, Asteroids, or Comets?

Planets can have rings – and so can centaurs. Saturn is the most famous of our ringed planets, but the other gas giants Jupiter, Uranus and Neptune have rings too. Observations of the large centaur Chariklo reveal that it likely has two rings, and observations of Chiron occulting a star suggest that it may have rings as well. But the color and composition of centaurs suggest a very different identify.

Some, but not all, centaurs could be asteroids. Centaurs are either reddish or blue to blue gray in color. These color differences remained a mystery until NASA’s Wide-Field Infrared Survey Explorer (WISE) project wrapped up its mission in 2013, with detailed observations on both centaurs and asteroids. WISE found that blue and blue-gray centaurs are dark objects, provably covered with a sooty layer over surface ice – much like comets. Red-hued centaurs, though, probably have an organic surface layer and a solid core – more like asteroids.

Some centaurs are most likely cometary – they have been, or may become, comets. Comets are typically dark objects, with an icy nucleus covered by layers of dust that are blown off as the comet nears the sun.

Data from the WISE project suggest that, like comets, blue centaurs are also composed of ice covered by a dark surface layer. Along with their oddly elliptical orbits, that suggests that at least some centaurs are actually comets – or could become comets, with enough orbital perturbation. Astronomers with the WISE project theorize that these blue centaurs may belong to the Jupiter Family Comets, a group of short period comets in the inner Kuiper Belt.

As the Minor Planet Center, NASA and other institutions work to catalogue and classify the ever-expanding family of centaurs, more mysteries may unfold. Like their mythical namesakes, the Solar System’s centaurs are many things at once, complex creatures that may hold keys to the origins ofthe Solar System itself.