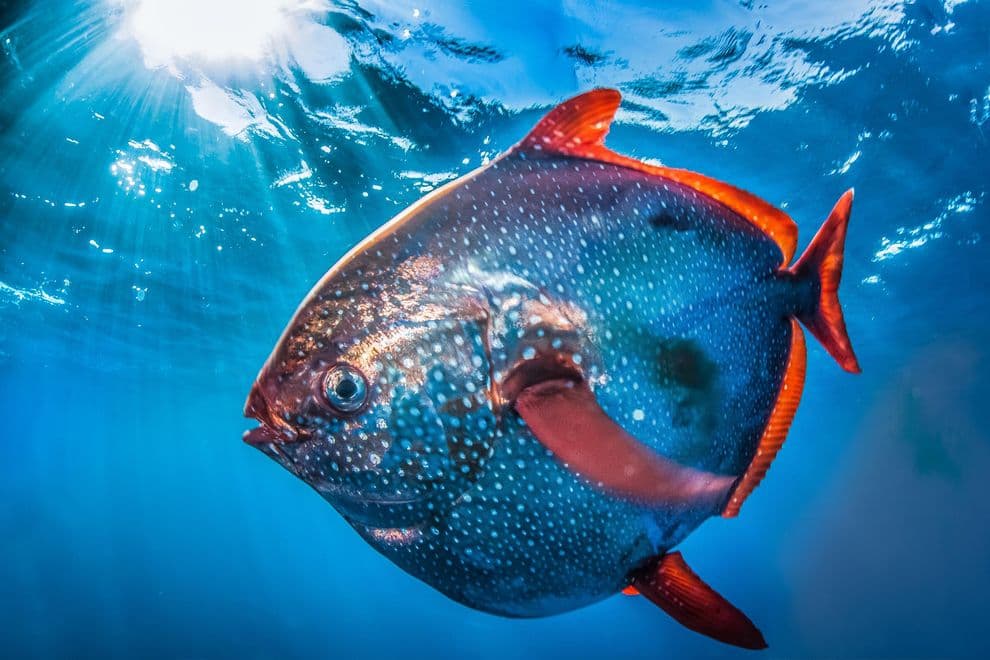 Researchers have discovered the first fish that warms its body much like mammals and birds. Has this bottom-dwelling anomaly been hiding in its deep, cold water home, evading scientists for years? Not quite. You're actually likely to find it on your dinner plate.

The Opah and its Rarity:

The Opah (or Moonfish), could win a body building contest, so to speak. Many specimens weigh in at over one hundred pounds. The heat that the Opah uses to warm its body is generated with its huge pectoral muscles, which it strengthens by flexing its pectoral fins. This not only assists with heating up the blood, but it also helps the Opah swim quickly.

While the Opah is the first fully warm-blooded fish discovered, it isn't the only fish that is able to warm itself. The Tuna, Billfish, and some Sharks are also able to temporarily raise the temperature of their muscles by conserving heat while they hunt—'temporarily' being the key word.

The Opah has been hunted by fishermen off the coast of California, as well as other locations, for years. In 2012 though, Owyn Snodgrass, a fisheries biologist from the National Oceanic and Atmospheric Administration in San Diego, California, considered the Opah's gills worth studying. The discovery was somewhat of an accident; he and his team caught a few more specimens than intended and decided to take advantage of them. He gave a colleague, Nicholas Wegner, a fish physiologist (AKA "The Gill Guy") the gills in a preservative.

Wegner was not in a rush to study them. After all, this fish was not a new discovery. When he finally did, he immediately knew there was something different about the Opah's gills.

Most fish have a few large blood vessels that carry blood to and from the gills. However, the endothermic Opah has a dense network of tiny blood vessels cozied right up to arteries and veins. Because they're so closely entwined, the warm blood heats up the cooler blood during circulation, allowing the fish to maintain a constant body temperature.

(Here's an image of Rete Mirabile, or "wonderful net," the name for this arrangement of paired arteries and veins. Don't click if you have a weak stomach. Just imagine a tightly-packed lump of angel hair pasta, but kind of grey and gross.)

Many animals use this "wonderful net" as a countercurrent heat exchanger. Some examples are aquatic birds and whales (their nets are in their tongues). The Queensland Groper uses its net to regulate buoyancy. The Tuna, Billfish, and certain Sharks mentioned earlier also use this wonderful net to keep their muscles warm, but only in short bursts.

The difference between them and the Opah is that the Opah is the first fish discovered with this arterial organization around its gills. The heat exchanger is wrapped in a centimeter-thick layer of fat used, presumably, for insulation.

To observe the temperature of the Opah as it swam, researchers caught an Opah, implanted a temperature monitor into the pectoral muscles, and let them swim for a few hours. The muscles remained about 10°C above the water temperature. Wagner and his colleagues have also used sensors that pop off and float to the surface after two days.

The ability to keep its brain and heart warm allows the fish to stay alert in any temperature water for longer periods of time and, consequently, be a great hunter. It mostly hunts fish and squid up to two hundred meters, where water reaches temperatures only as high as 10°C. The Opah, though, is able to retain its fast response time, which allows it to pursue squid at these depths.

This is not the first realization scientists have come to about the Opah and its unique make-up. In 2008, Evidence for cranial endothermy in the opah (Lampris guttatus) was published in The Journal of Experimental Biology. This study explained that the brain and eyes of the Opah are warmer than the rest of the body due to a small countercurrent heat exchanger—only separated from the brain by only a thin layer of bone.

This revaluation, along with the recent discovery about the Opah and its ability to retain body heat, enforce the notion that scientists still have much to learn about the ways that fish can adapt. This discovery could lead to a new understanding of the ways in which deep oceanic lifeforms survive.

Now that we know that this fish has some unique properties, should we take it off the menu? As the Opah becomes increasingly popular in seafood markets, the organization SeaChoice warns consumers of the dangers of long-line fishing of Opah. Increased fishing of Opah can result in the deaths of endangered turtles, seabirds, marine mammals, sharks, and rays.

Additionally, this discovery also has the potential to encourage consumers to think twice about how their purchases are impacting the ecosystem. Together, we can take steps to keep the ocean healthy and flourishing. Next time, it could be worth it to check our other dinner courses for signs of unique function before picking up the knife and fork.