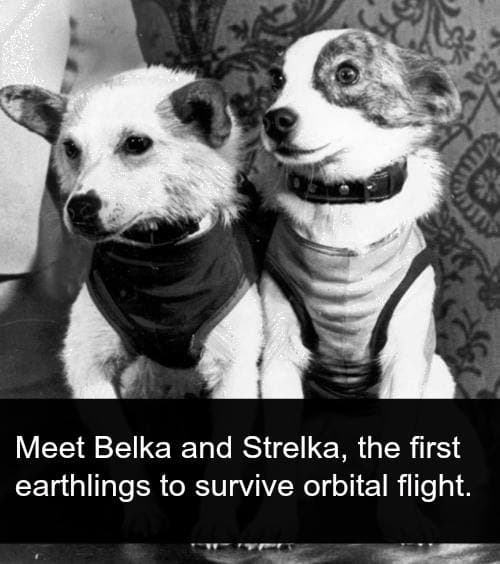 On August 19, 1960 the USSR launched Korabl-Sputnik 2, which was known as Sputnik 5 in the West. On board were two mix-breed strays that were found wandering the streets of Russia. The tiny canines each weighed about 12 pounds and were named Belka (Squirrel) and Strelka (Little Arrow).

The primary aim of the mission was to gather intelligence regarding the physiological effects of space flight. This information would ultimately be used to determine whether or not a short-term exposure to weightlessness seriously impacted basic bodily functions. Fortunately for Belka and Strelka, it doesn’t. Unfortunately, these pioneers didn’t exactly have first class seats.
Did you ever have a twenty-four hour flight? Were you in the middle seat in economy class? Were there about a hundred other people crowded around you, vaporously breathing down your neck? If so, then you probably understand how Belka and Strelka felt. The cabin was rather crowded; their travel companions included a gray rabbit, 40 mice, two rats, fruit flies, a plethora of plants, a human mannequin, and a card.

A card? In case the capsule was lost outside of the recovery zone, a small card directed anyone finding the object to contact local officials immediately. The instructions also stated that the finder should not open the capsule, but simply turn it upright, and leave it exactly where it had landed. Fortunately, scientists managed to locate the capsule shortly after reentry, and after orbiting for nearly 25 hours, and revolving around the Earth some 18 times, the dogs were successfully recovered near Orsk in the USSR.

I know that Belka and Strelka’s accomplishment might not seem that impressive, but that’s because our perspectives are a little bit warped. Today, we have landers on another planet, spacecraft leaving the solar system, and over one thousand satellites orbiting the Earth. However, the only reason that we have achieved these things is because animals like Belka and Strelka paved the way for us. When looking back at this mission, it helps to remember that these gals orbited the planet almost a year before the first human—they traveled through space while humanity was still just dreaming about it. And without them, we may never have got there.

So it is no surprise that their decedents are basically American royalty (I'm not kidding).

Shortly after returning to Earth, Strelka gave birth to a litter of six puppies, one of which was given to Jacqueline Kennedy, wife of U.S. President John F. Kennedy. The pup was named Pushinka (Fluffy) and grew up in the White House. However, because of the Cold War tension between the U.S and USSR, before she could enter the White House Pushinka had to be X-rayed and frisked by army experts in order to ensure that she did not harbor any “bugs” or doomsday devices.

Again, I’m not kidding. And the story doesn’t end there. In the White House, Pushinka and the Kennedy’s dog Charlie developed a fondness for one another, which resulted in the birth of 4 pups. And the space dog’s descendants thrive to this day.

But what about Belka and Strelka? Both dogs died peaceably of old age. Upon their deaths, they were taxidermied and today their bodies are preserved at the Memorial Museum of Astronautics in Moscow. Belka is on display in a glass case in the museum, while Strelka is part of a traveling exhibit that has visited a number of countries. In a sense, I guess Strelka still traveling around the globe.

If you don’t remember any of the facts or details about the mission parameters for Sputnik 5, I won’t be too worried. If you don’t travel to Russia to see the memorials, that’s just fine. But the next time you hear the phrase “That’s one small step for man…” remember that man was not the first one to take those steps, or at least, he didn’t take them alone.