May the (Fifth) Force Be With You 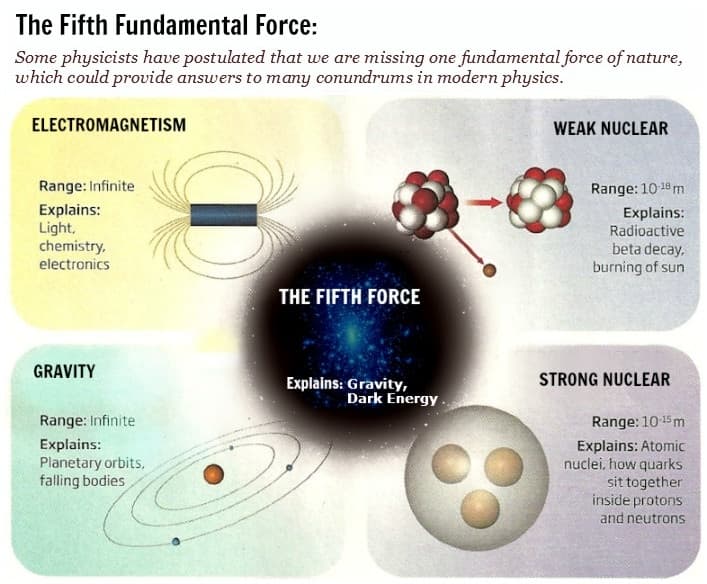 Considering that we have very little information in regards to gravity, the force that keeps us anchored to Earth, its existence is rather obvious. It reminds me of all of those memes that say "Evolution is just a theory." Well, so is gravity. You don't see people jumping off from buildings, do you?" The point theses meme is trying to make is that people 'believe' in the theory of gravity because they see demonstrable evidence of it. However, no one is forced to research the underpinnings of evolution, so individuals remain blind to the way that it is at work all around them.

Conversely, gravity is at work, not just on a micro-scale, but on a macro-scale as well. All across the cosmos, gravity can be seen holding galaxies and clusters together. A lot of questions remain: "What is it?" "How is it created?" "What does it do?" "How does it work?" But we see it at work, and many researchers hope to answer theses question very soon, hopefully solving some other interesting related questions along the way.

Ultimately, a new research team set forth to characterize the properties of one of the most surprising observations in modern times--dark energy. This energy can be observed disrupting the fine details of general relativity on a macro-scale, as distant galaxies experience some mysterious repellent force that is driving them apart at an ever-increasing speed. Ultimately, this increased speed of expansion is in contrast to our models of gravity, as gravity suggests that all galaxies and stars that were thrust into existence after inflation (when the universe increased exponentially in size after the big bang) should ultimately begin to slow down. Not speed up.

Dark energy is but one theory, perhaps the leading one, put forth to explain the overzealous expansion of the universe. The fine details suggest that the vacuum of space is not truly empty (which is correct in and of itself, as the interstellar medium is full of virtual particles that zip in and out of existence). However, in this context, the theory suggests that space is filled with energy that is responsible for galaxies speeding apart. The so-called expansion of the universe was first tested using the light emitted from a special type of star, called Cepheid variable stars (or standard candles), which are quite effective in conveying the distance that separates us from the galaxy the star is located in.

Because the stars have a tendency to oscillate in brightness over the course of time, paired with the correlation between the rate of oscillation and intrinsic luminosity, they reveal the true distance between the stars and Earth.

The other theory, called the 'scalar-tensor' gravity theory, postulates that dark energy does not exist, but that there is a fifth force of the universe (apart from the four primary ones-- electromagnetism, the strong and weak nuclear forces and gravity [the weakest of the bunch]) that essentially modifies the properties of gravity on a cosmological scale. It's not a new idea, but one that has evolved over the years.

According to Bhuvnesh Jain, an astrophysicists from the University of Pennsylvania, whose research delved into the latter possibility, both theories are radical in their own way.

So to get a footing and a clue, Jain and his team began by analyzing a massive cache of data taken by Hubble of Cepheid variable stars located in galaxies from our local group. They believe that they have finally produced some solid evidence to support the 'scalar-tensor' gravitational theory, which again suggests that there is a fifth force responsible for the observation of the accelerating expansion of the universe -- findings that would vindicate the portion of Einstein's General theory of relativity that theorizes on the nature of gravity.

To expand, the team discovered that some galaxies are immune to the effects of the so-called fifth force (like larger galaxies and galaxy clusters) while others (like smaller, more remote galaxies) are not.

The team could not find any variation in the control samples of the galaxies that were used in the study and the ones that were not, thus aligning with predictions made by the theory of general relativity. Ultimately rendering the strength of the fifth force as "constrained." Hopefully in the years to come, as Jain expects, several prevailing theories of gravity can be eliminated, allowing us to develop a concise model that aligns with our observations.

The full study can be read here: "Astrophysical Tests of Modified Gravity: Constraints from Distance Indicators in the Nearby Universe"