A Massive Crop Circle Appeared in Italy This Week 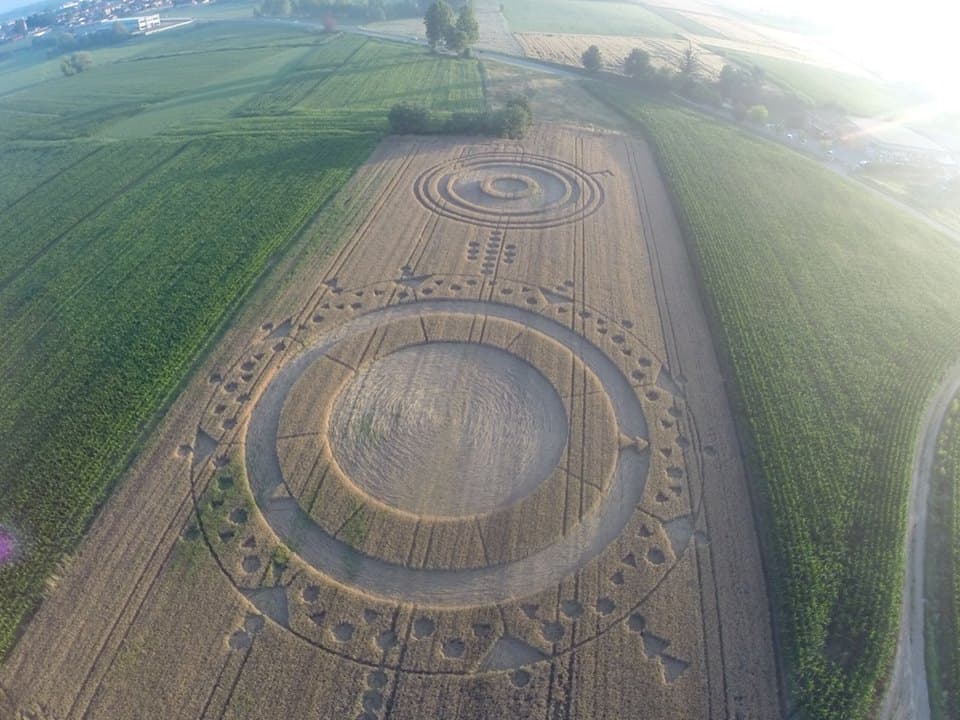 Crop circles have fascinated people for decades. In the early 1970s, many of these structures began appearing in fields and pastures, mostly in Southern England (as an aside, crop circles appear to be unknown throughout history. The first only appeared in the early 1970s). Throughout the 70s, more and more of these structures began popping up (again, mostly in England). Their increased presence led to widespread speculation regarding whether aliens and UFOs (unidentified flying objects) have been visiting planet Earth.

Since this time, several studies have proved that such designs can be made by humans in just a few hours. Moreover, these structures can be made without leaving any trace of human presence (by following farm lanes, wearing gloves and protective clothing, operating at night, etc.). According to scientific,  peer reviewed research, it seems that these structures are, in fact, not the calling cards of little green men (or women). Rather, they are complex patterns created by individuals with an eye for design and a basic grasp of technology. However, despite the fact that the "alien/crop circle" link has no actual evidence,  many individuals still insist that these patterns prove that we have been visited by explorers from other worlds.

This is precisely what led to the creation of the pattern that you see below. This particular image is called the "LENR (Low Energy Nuclear Reactions) Clock" crop circle. It was created by Francesco Grassi and his colleagues. On Facebook, Grassi announced that he made the circles to prove that humans can achieve such a feat in just a few hours. He asserts, “Now you know that it’s possible for human beings to create the Marocchi/Poirino 2014 formation in few hours during the night."

But even though individuals like Grassi, as well as Doug Bower and Dave Chorley, have come forward and stated that they have created these structures in mere hours, people still insist on blaming aliens.

There are a number of ways that these formations can be created. For example, one can use a GPS, lasers, or even microwaves (microwaves could lay the vegetation flat without breaking the stalks). The analysis on the use of microwaves, reported in Physics World journal, reported that researchers were able to use magnetrons, which are tubes that use electricity and magnetism to generate intense heat, to mimic the physical changes in flattened stalks that are found in some notable crop circles. These findings suggest that magnetrons, found in microwave ovens, could be used to complete detailed patterns in only a few hours.

Indeed, all of the aforementioned devices would allow individuals to create these patterns quickly and with much precision. Similar designs can also be made by using ropes and boards to lay the vegetation flat. Such simple tools were the devices utilized by the earliest designers, whose patterns were a bit less precise. However, modern artists (and pranksters) have a host of tools and new technologies at their disposal.

Unfortunately, this only increases the conviction of those who claim aliens are responsible, as they assert that humans could never make such huge patters with this amount of precision in such a short time. And even when it is proven that a specific design could have been created by using measurements, tools, and basic design skills, the deniers cry, "you don't have proof that every single crop circle was created by humans."

Scientists have not measured and marked and researched every single crop circle in order to prove that each one could (in fact) be created by humans. But fortunately for us, that's not how science works. We have evidence which proves that humans could make these structures; we have no evidence of aliens. We also have no evidence that an invisible and radioactive pink bunny is making the formations, or the devil, or God, or Zeus...you see where I am going with this.

I am not saying that aliens don't exist. According to basic probability,  it seems that aliens likely do exist. But that doesn't mean that they are responsible for every thing that hasn't been explained. Such claims are akin to a "God of the Gaps" argument and are entirely unscientific.

The basic point, science requires evidence, and there is no evidence that aliens made crop circles. But fear not, as soon as there is evidence of aliens creating crop circles, scientists will relentlessly interrogate the evidence to either prove or disprove it.