"The concept is literally blood-curdling." 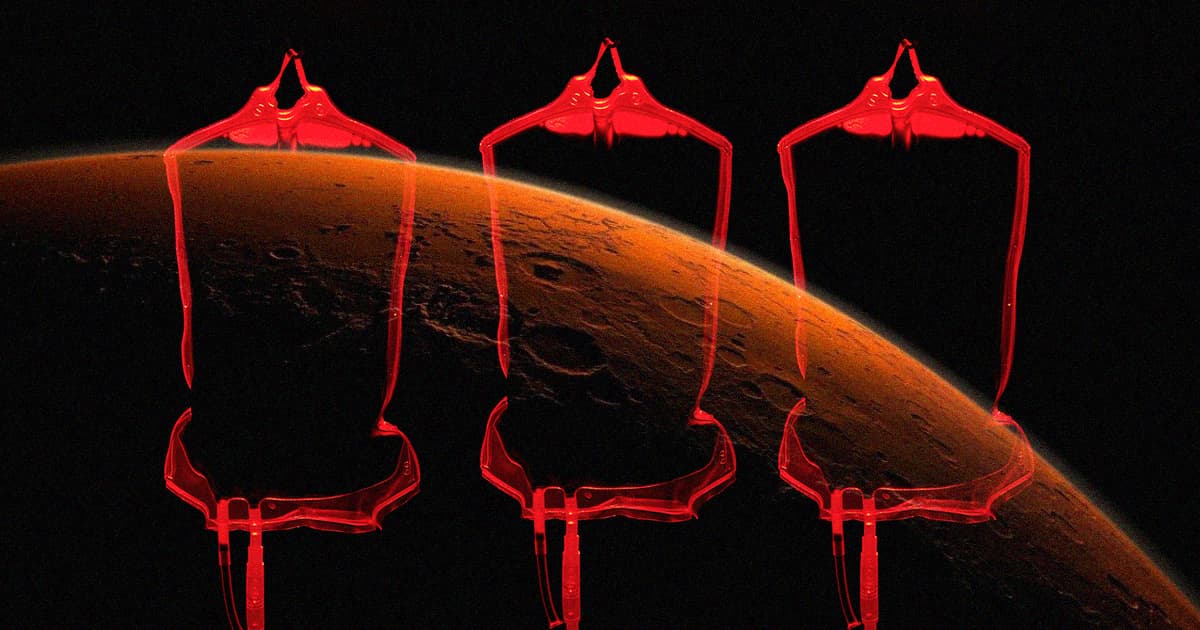 Scientists at the University of Manchester have come up with a macabre new way to turn Martian soil into a stronger material for the construction of future colonies on the Red Planet.

Specifically, they suggest mixing human blood, urine, sweat or even tears with Moon or Mars dust to form a glue that can be used to build — or 3D print — entire buildings.

In other words, they say we could use the the literal blood, sweat, and tears of astronauts to construct their new homes on a distant world. It's a creative approach to in-situ resource utilization that could allow future Martian settlers to skip the costly process of sending building materials all the way from home.

"Scientists have been trying to develop viable technologies to produce concrete-like materials on the surface of Mars, but we never stopped to think that the answer might be inside us all along," said Aled Roberts, from the University of Manchester, in a statement about the research.

It's not the first creative idea for building future off-world shelters. Other researchers have proposed we could use insect polymers, human urine, or even mushrooms.

As detailed in a new paper published in the journal Materials Today Bio, the Manchester team suggests using a special protein found in human blood as an "in vivo binder" to create a kind of Martian soil concrete. Urea, a nitrogenous product extracted from urine, could then strengthen the material even further.

Using animal blood as a binding agent for mortar actually has its roots in medieval technology, due to a bonding mechanism caused by blood proteins denaturing.

"The concept is literally blood-curdling," Roberts quipped in the statement.

The researchers suggest that the resulting material, dubbed AstroCrete, could be 3D-printed on site, which opens up "an interesting potential avenue for extraterrestrial construction using human-derived feedstocks," as they write in their paper.

The team's calculations suggest that six astronauts could generate over 1,100 pounds of the stuff over a two-year mission, potentially expanding available housing by one additional crew member each mission.

The idea of using astronauts' bodies to construct shelter has an almost poetic ring to it. Besides, future spacefarers will already be putting everything on the line to travel to Mars and eventually turn our species interplanetary.

After all that, what's a little extra blood, sweat, and tears?

More on Martian colonies: Scientists: We Could Build Mars Shelters Out of Insect Polymers and Martian Soil

Read This Next
A Sip of Opal
NASA Discovers Precious Gemstones on Mars
Martian Oases
Scientist Proposes Growing a Forest Inside a Bubble on Mars
Big Impact
Meteorite Hit Mars So Hard NASA Thought It Was a Quake
Palliative Care
NASA's Mars Lander Refuses to Die Even Though It's Supposed To
Signs Of Life
NASA Seems Awfully Excited About Finding Organic Matter on Mars
More on Off World
Gl1tc4
2:44 PM on the byte
NASA Says Another James Webb Instrument Has Suffered a Glitch
comet Spotting
2:06 PM on the byte
Behold! Dazzling Green Comet Approaches
Drama Bomb
Wednesday on the byte
European Space Agency Halts Plans to Send Astronauts to Chinese Space Station
READ MORE STORIES ABOUT / Off World
Keep up.
Subscribe to our daily newsletter to keep in touch with the subjects shaping our future.
+Social+Newsletter
TopicsAbout UsContact Us
Copyright ©, Camden Media Inc All Rights Reserved. See our User Agreement, Privacy Policy and Data Use Policy. The material on this site may not be reproduced, distributed, transmitted, cached or otherwise used, except with prior written permission of Futurism. Articles may contain affiliate links which enable us to share in the revenue of any purchases made.
Fonts by Typekit and Monotype.