Make a Cosmic Ray Detector at Home and Test Relativity! 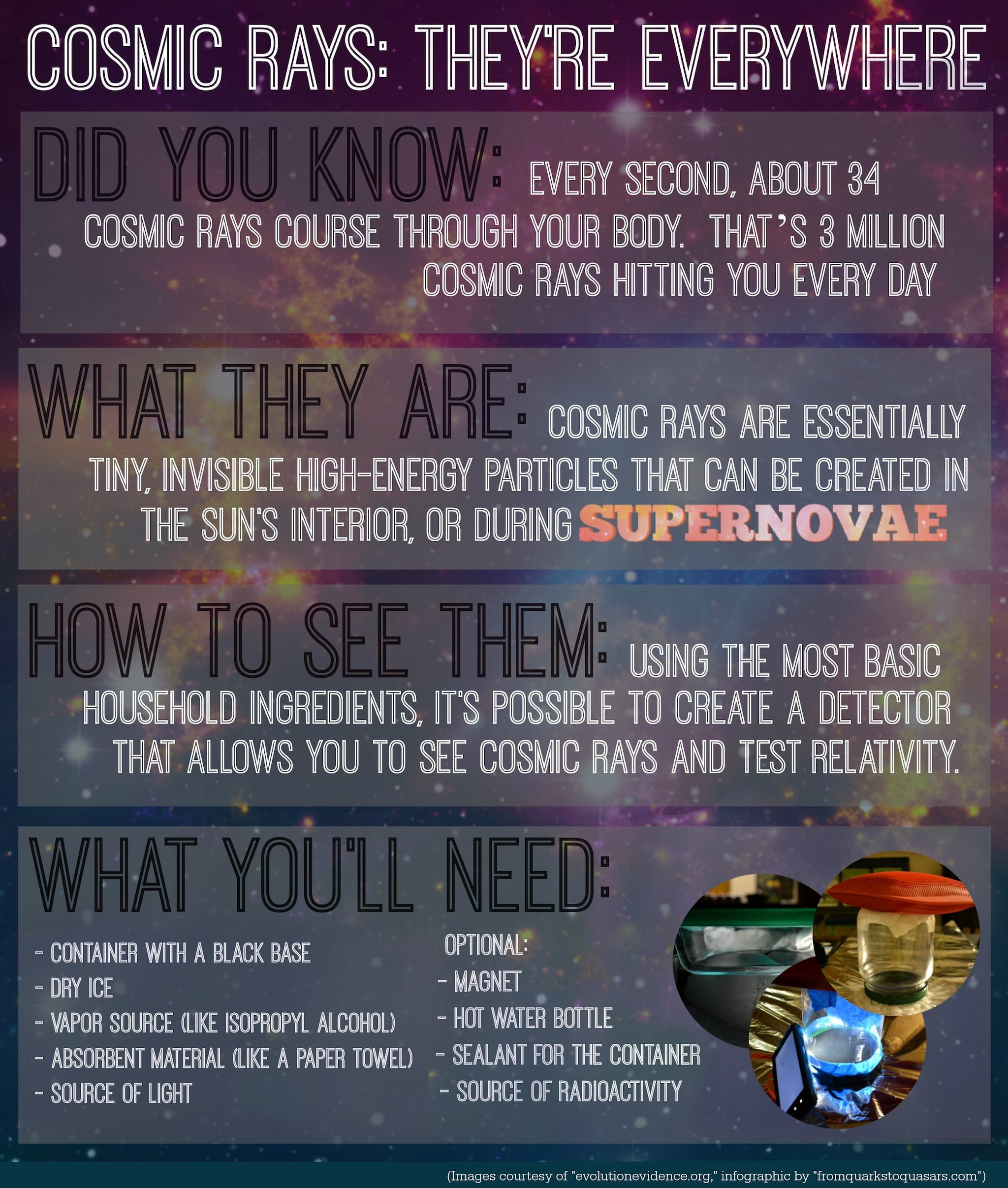 Every second, about 34  cosmic rays from the Sun (and some from distant supernovae) zip through your body.  That's 3 million cosmic rays penetrating you a day.

Typically we are totally oblivious, unaware of the stunning particle symphony enveloping us.  However, we can make that all change.  You can see cosmic rays with your own eyes! See them clearly for the first time with these easy direction listed below. It will forever change the way you think about your surroundings.

First-What is A Cosmic Ray?

A high energy charged particle that comes from highly energetic cosmic events that blow apart atoms, sending hydrogen and helium nuclei, electrons, and even the very special muons (more on these below) zipping towards us at nearly the speed of light.  Examples of such events include solar flares and supernovas.  Like a constant particle rain, they pour down on Earth.  These particles can cause mutations when they hit DNA.  Fortunately, Earth's magnetic field protects much of the Earth from the full brunt of cosmic rays.

The doughnut shaped magnetosphere funnels much of the cosmic rays sent towards Earth to the poles, exciting electrons in the atmosphere enough to produce light - the auroras. Listen to Brian Cox wax eloquent about how the cosmic rays from supernovas shooting through his ancestor's bodies created the mutations that lead to him.

Here are just a few facts about cosmic rays and reasons why they are important:

How The Test Works in Relation to Relativity:

Some of the cosmic rays hitting Earth strike the nuclei of gas in our atmosphere.  Some of these collisions produce pions, which then decay into muons (a negatively charged particle with mass).  Muons are unstable and have a half life of 2.2 microseconds.  That means that they should decay after traveling only 660 meters/2165.35 ft; although these particles travel pretty quick, they should almost never reach the surface of Earth.

However, 34 just shot through you this second. By another estimation, about 10,000 reach every square meter of the surface of Earth.  So these particles are making it much, much  farther through our atmosphere than would be expected. How is this possible? Well, it's all rather simple. First, they are traveling 98% of the speed of light, because they are traveling at relativistic speeds (speeds approaching the speed of light) time is slowed down, which allows them to reach Earth's surface and shoot through your body Let me repeat that for emphasis: the particle detector you build works (in part) because of relativity.

Muons reach it because time is slowed down due to relativity, and their life is extended long enough to make it through the atmosphere to you.  These simple cloud chambers are, in essence, testing relativity.

Why Do the Cloud Contrails Form?

As the cosmic ray shoots through the atmosphere it ionizes the air molecules (hence, it's called "ionizing radiation").  That means that it is so energetic that it causes electrons to disassociate from their nucleuses.  These free agent ionized particles then act as nucleation sites for the alcohol vapor to condense upon - the opposite charges get "sticky" with each other.  So, the cosmic ray contrails share more than just superficial resemblance to the contrails produced by airplanes, which is droplets forming on the burnt fuel nucleation sites.

Materials To Conduct the Experiment:

Here are a few video explanations of the construction process:  This is the best and simplest video explanation.  See what it looks like to use a radioactive source (lead).  Here's a video description of the first cloud chamber (which was the first time subatomic particles were observed!!) that used a vacuum to supersaturate air with water vapor.  Here is how to make such an expansion cloud chamber (much more complex than the diffusion cloud chamber described below).

Teachers/parents/whoever, click on these for curriculum from Fermilab and Cornell.