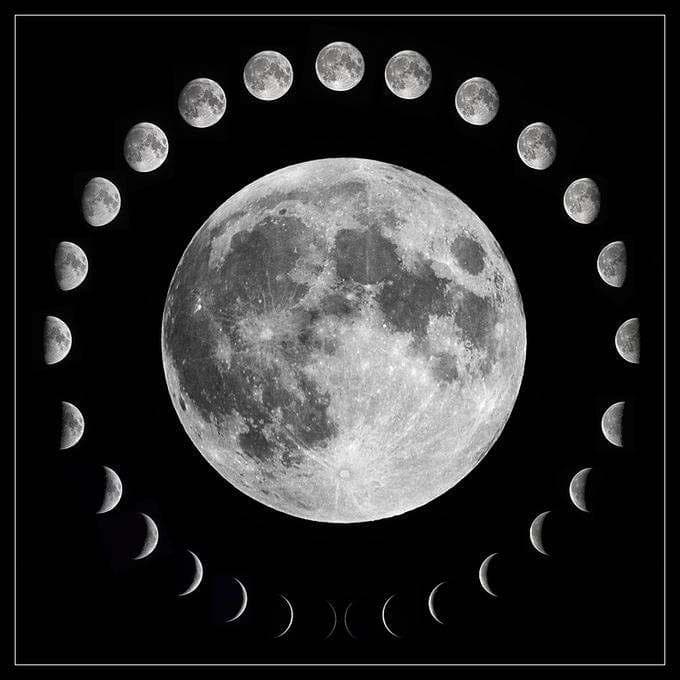 This incredible collage was taken by William Hood and it shows each of the 28 phases the moon goes through in its lunar cycle. William was fortunate enough to capture these images over the July-August 2004 lunar cycle completely uninterrupted by cloud cover. I think this is a brilliant opportunity to talk about lunar cycles and answer questions frequently asked question about them, such as ‘is it really possible to see a truly ‘full’ moon or ‘can we watch the moon move’.

Can you actually watch the moon move?

The moon ‘moves’ in two ways when we watch it from Earth. The most dramatic way, watching the moon rise, fly across the sky, and set, is caused by Earth’s rotation. Looking at the moon with the naked eye, it appears to move very slowly (but, come back an hour or so later and it’s clearly ‘moved’). Through a telescope, the moon is really hauling it across the sky.

If you pay really close attention to the moon and the background stars around it, you can actually watch the moon move through space as it orbits the Earth. This motion appears much less dramatic than the moon’s motions as a result of the Earth’s rotation, but it’s still there and noticeable if you pay attention.

How does a full moon last?

Even though your lunar calendars, whether in the newspaper, your wall, or the internet, say that the full moon happens “on March 27 2013”, it doesn’t actually last all night. The moon is only full when its surface is fully illuminated from our perspective on Earth. As mentioned above, the moon moves through space to a noticeable degree in its orbit. This is why, when you look at most sources talking about the full moon, it’ll say “March 27 2013 - 02:30:20” (at least, it will if you live in Mountain Standard Time). This is because the moon is only full when it’s fully illuminated from Earth. This full illumination lasts for about a minute. Previous to this time, the moon is technically a waxing crescent and after it’s technically a waning gibbous.

With that, is it possible to see a truly full moon?

A truly full moon would involve 100 percent of the visible lunar surface to be lit by sunlight. In order to achieve perfect lamination, the moon must be completely opposite to the sun in the sky. Since the moon, Earth, and sun orbit on slightly different planes, this type of line up doesn’t always happen. In order for the moon to be completely opposite the sun, the Earth must be in the way. This means that the moon is in the middle of Earth’s shadow (or umbral) in an event known as a total lunar eclipse.

Interestingly enough, even in a total lunar eclipse, the moon isn’t fully illuminated. The moon is small enough relative to Earth’s umbral that it has some freedom to ‘wiggle’ around without having to be directly opposite the observer. So, it might be 99.999% full, but it’s not quite there. (In case you were interested, the next total lunar eclipse in April 15, 2014 and will be visible from the Americas, Australia, and regions in the Pacific Ocean. Asia gets thrown into the mix on October 8, 2014.