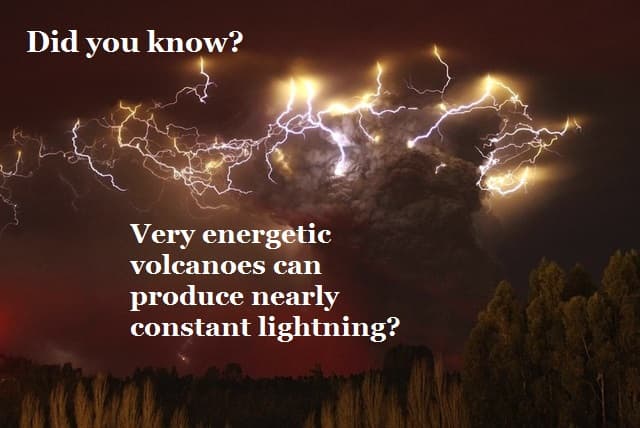 There are few phenomenon on Earth as terrifying, devastating, and interesting as volcanic eruptions. Massive amounts of rock and ash soar high into the atmosphere as the Earth’s crust opens and the great forces present within the mantle are released.  Volcanic eruptions are one of the most energetic events on the planet; only a few other natural events can compare – lightning being one of them.

In nearly every part of the world (other than very cold regions), thunderstorms are a common occurrence, and they are usually nothing to worry about.

The most severe storms have several dangerous components, such as floods, winds/tornadoes, hail, and of course, the beautiful lightning. When electrical charges due to wind and ice in the atmosphere build, tremendous amounts of energy are released upon a ground source (trees, buildings, other clouds, etc.). What can be more amazing than volcanoes or lightning? Volcanic lightning.

Volcanic lightning has been said to be the most beautiful natural event on Earth. While it’s rare, those who have captured its intensity on camera describe it like a legend – researchers can’t describe it much better either. This lightning is as hard to study as it is beautiful, for more than one reason. Martin Rietze, a German photographer who travels the world to capture these electrifying events explains to io9.com that smaller volcanic eruptions lead to less intense electrical storms, which can be hard to spot through the thick plumes of ash and rock spewing from the volcano. To make things more difficult, the lightning is most active during the beginning of the eruption, giving an added challenge (and danger) to photographers and researchers. Rietze points out, “you will always arrive too late” unless you happen to be documenting the eruption at its start.

You may be asking yourself the same question as many researchers: how does this lightning happen? First, let’s not get confused – though a similar mechanism, volcanic lightning is not from a thunderstorm. There are two types of volcanic lightning we’ve observed. The first, which is a bit more understood, is when charged gasses meet the air. Very similar to the process which happens in thunderstorms, an effect called “charge separation”  happens when particles of ash and rock collide in the plume above the volcano.

As you may recall from above, in thunderstorms, ice crystals rub together to produce an electrostatic charge. When that charge finds an opposite charge, a connection happens, and we get lightning. Replace ice with volcanic rock and ash, and you’ve got lightning rumbling through the ash cloud above a volcano, simple… right?

However, very interesting phenomena are often not this simple, which is precisely the case for the second type of lightning that radiates from a volcano. There are some large sparks (lightning) which seem to come from the mouth of the volcano, nowhere near the large plume of gas and dust. The process here is similar to the first, except the lightning occurs so close to the mouth of the volcano that we don’t know how the charges are building. This article from the Smithsonian explains that charged magma creates continuous sparking around the mouth of the volcano, but scientists are stumped as to how the magma becomes so charged seemingly before even leaving the ground.

Hopefully, the future will hold better technologies to remotely monitor and photograph volcanic eruptions, catching them as they’re starting will be a great leap towards a better understanding of this lightning. For now, all we can do is marvel at the wondrous photographs and video of this amazing natural force.