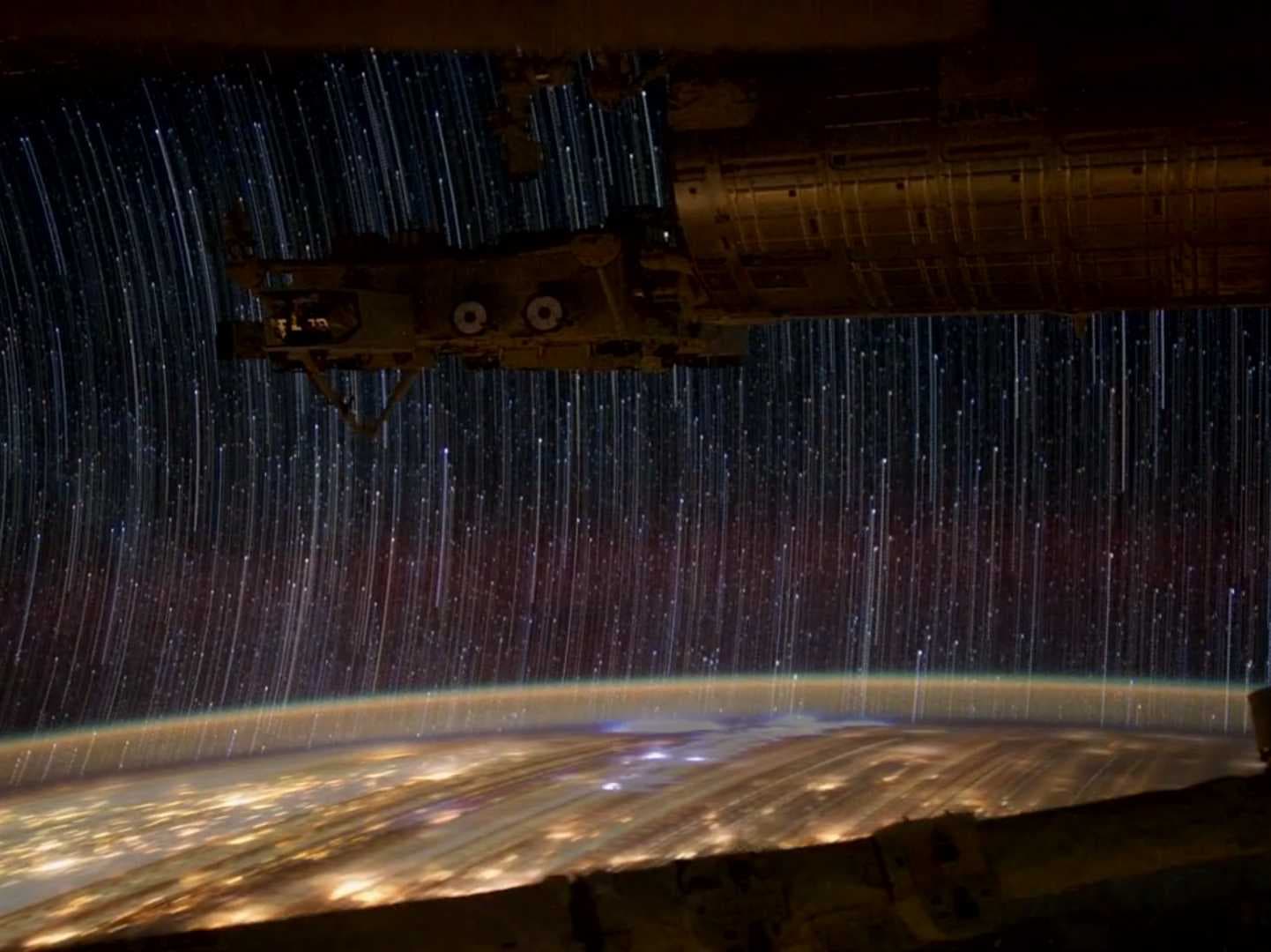 Lightning storms on Earth are amazing, but nothing beats the view of a storm from miles above the Earth. In 2012, astronaut Don Pettit was aboard the International Space Station (ISS). During his stay on the ISS, he obviously witnessed a number of breathtaking views. The above image is perhaps one of the most stunning as a result of its simplistic beauty.

Here, we see the Lyrid meteor shower ripping across Earth. The pale, white streak that you see in the center of the image is actually a one of the Lyrids ablating (burning up) as it blasts through our planet's atmosphere. You can also see the darkened sky of Florida and the Eastern Gulf Coast as well; it is the blurred region streaking across the center of the frame.

It might not be too obvious that the skies of the Florida keys are covered in clouds. After all, it just looks like a mass of black. However, we can tell that things were rather dim because we can clearly see the flashes of lightning that pepper the sky.

Here is a fantastic (but sadly, rather short) video of a lightning storm. This, like the other images, was taken from the ISS as it hurdled around the Earth at some 17,500 mph (28,160 km/hr). In the video, you can also see the Milky Way drifting softly over the Earth (imagine what our views would be like without all the pesky light pollution). Ultimately, we can see the stars in this clip because the cameras are set for a nighttime exposure. As such, they are sensitive enough to capture the stars that appear in the background of the video. As you can tell by the end of the film, when the Sun starts to rise, everything gets washed out by light. In the video, the storms are appearing over Africa.

This image is actually a composite image made from photographs that were taken by Pettit during his stay on the ISS. Here, we see blueish blasts of lightning as they light up the night sky. In the back of the image, we see the circular shape of the stars as they drift across the cosmos. In the upper left and lower right corners of the image, small parts of the International Space Station obscure the view. Spanning the loser center of the image, we see the airglow that is being generated by the Earth's atmosphere.

That's right, this glow is not made by aurora (which is caused by light passing through the Earth's atmosphere); rather, this glow is being produced by the atmosphere itself. This is caused because the atmosphere absorbs UV light, and from time to time, these will be re-emitted. We can's always see the radiation that it gives off, but often the wavelength is just right--and that is the airglow that we can see.

This is another image that comes from the ISS. However, this is not a composite. Rather, it is a long-exposure image that was taken from the station. Like several of the other images in this post, this photo also comes from Pettit. Admittedly, he is quite the photographer, but he did spend almost a year on the ISS, so as anyone who is familiar with Chris Hadfield can tell you, the huge catalog of images and videos is probably to be expected.

And the final image is of a  lightning storm playing our over the water on Earth. As a fun aside, lightening often strikes the surface of the Earth 50 times a second!

True, this image is not from the ISS, but I thought that it might be appropriate to leave off with this view--just as a reminder that the way it looks from down here is pretty fantastic too.