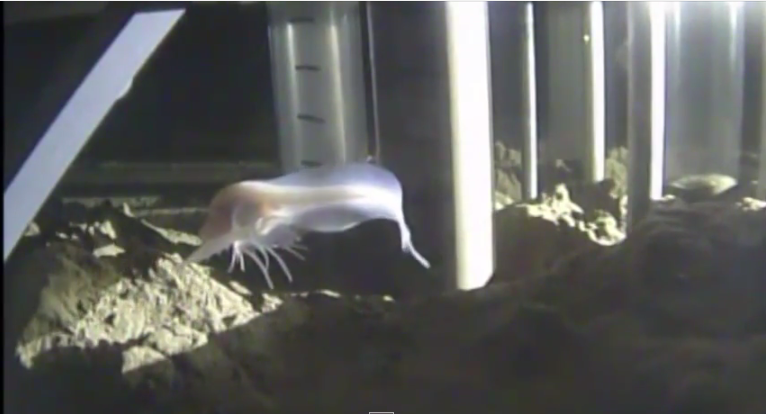 The Mariana Trench is a terribly inhospitable place. It is deep. It is dark. But it hosts life. A recent expedition, the Hadal Ecosystem Studies (HADES) expedition, led by co-chief scientists Jeff Drazen and Patty Fryer of the University of Hawaii, recently embarked on a journey to research the deepest trench on Earth, and what they found is simply amazing.

Several records for deepest living fish, either caught or seen on video, were broken. But one takes the cake, living at a record setting 8,143 meters (26,715 feet or just over 5 miles). What's more, this is also a newly discovered organism; what they found is a completely unknown variety of snailfish. The white translucent fish had broad wing-like fins, an eel-like tail, and it slowly glided over the bottom. of the ocean floor. Dr. Alan Jamieson stated that "when findings and records such as these can be broken so many times in a single trip, we really do get the feeling we are at the frontier of marine science." See this amazing creature in action in the video below.

Rather than just focusing on the deepest point in the Mariana Trench, this concerted effort was made in order to gain a better understanding of the interplay between life and geologic processes across the entire hadal zone.  Dr. Drazen expressed the drive behind this method, "Many studies have rushed to the bottom of the trench, but from an ecological view that is very limiting.  It's like trying to understand a mountain ecosystem by only looking at its summit".

The findings from this research will help to answer important questions about Earth's largest and least explored habitat, including what organisms live there and how life adapts to these extreme conditions, and how much carbon in the atmosphere reaches the deep sea and if it affects the food chains there.