Life Beyond Earth: A Day on Triton (Neptune’s Largest Moon): 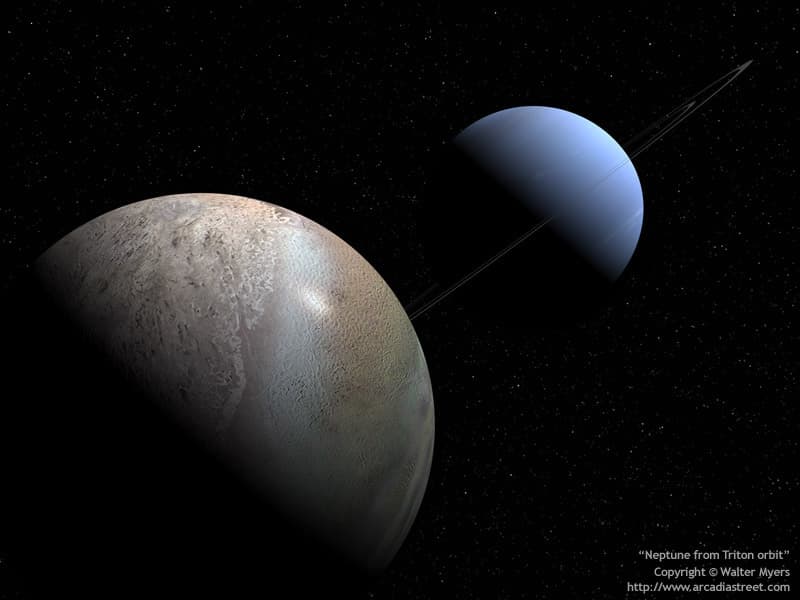 Today, I would like to talk to you about what it would be like to spend a day on Triton. You may be thinking, “But I didn’t even know what Triton was until I read the title of this post. Why the heck would I want to go there?” If you did ask that question, I am judging you now (kidding).

Seriously though, a better question is: Why wouldn’t you want to go to Triton? Triton has everything that a tourist could want: smooth volcanic plains, shallow pits left by violent impacts, and valleys formed by icy lava flows. So you could spend your day skating across the sheets of ice-covered nitrogen, trooping through some of the frozen vales, or sliding down the cosmic craters. Best of all? Triton is one of the only geologically active moons in our solar system. So you can top it all off with a trip to see some of the massive plumes that are spewed forth by the Tritonian geysers. And these beasts aren’t like some of the one-shot wonders we see on Earth. Triton’s geysers continually eject material, sometimes shooting their smoky clouds 5 miles (8 km) into the atmosphere for years on end.

Plus, it’s a great place for snuggling! And you’ll definitely need someone to snuggle with because Triton is the coldest object in our solar system. With temperatures on its surface reaching -389 °F (-234 °C), Triton is even colder Pluto. I suppose you'd want a cozy fire to contrast with the frozen beauty of Triton? Understandable. But unfortunately, the moon’s sparse atmosphere consists mainly of nitrogen; as an inert gas, nitrogen does not support combustion. So no fire for you. Snuggling will have to do.

Breathable air is basically 21% oxygen and 79% nitrogen, so the nitrogen-rich atmosphere on Triton can’t be that bad, right? Yeah, not so much. It’s better than trying to breathe in a vacuum, but not by much. Honestly, you’re better off holding your breath on Triton. You see, if you don’t breathe, your body will use the oxygen stored in your blood and, once it is depleted, you’ll pass out. But nitrogen eats (cleans) the oxygen out of your blood, so breathing on Triton is a bad thing. A very bad thing. Even people who are acclimated to oxygen deprivation (people who have been trained to go without oxygen for minutes on end) will black out after a few seconds breathing Triton’s air. Forty seconds, max. Then it’s lights out.

Nitrogen has no odor, and breathing it gives you almost no feeling of hypoxia (that terrible chest-crushing feeling you get when you don’t get enough oxygen). However, if you actually want to breathe on Triton, you need to take off your spacesuit. And, in Triton’s near-vacuum atmosphere, your spacesuit is the only thing providing enough air pressure to keep your fluids in a liquid state. Essentially, trying to breathe on Triton would result in all your bodily fluids being boiled away.

See, I told you it wasn’t much better than a vacuum. So maybe just leave your space suit on? Or don’t, the decision is yours. And with a 12-year flight path, you’ll have a long time to think about it.