Life (or Death) Beyond Earth: A Day on a Neutron Star 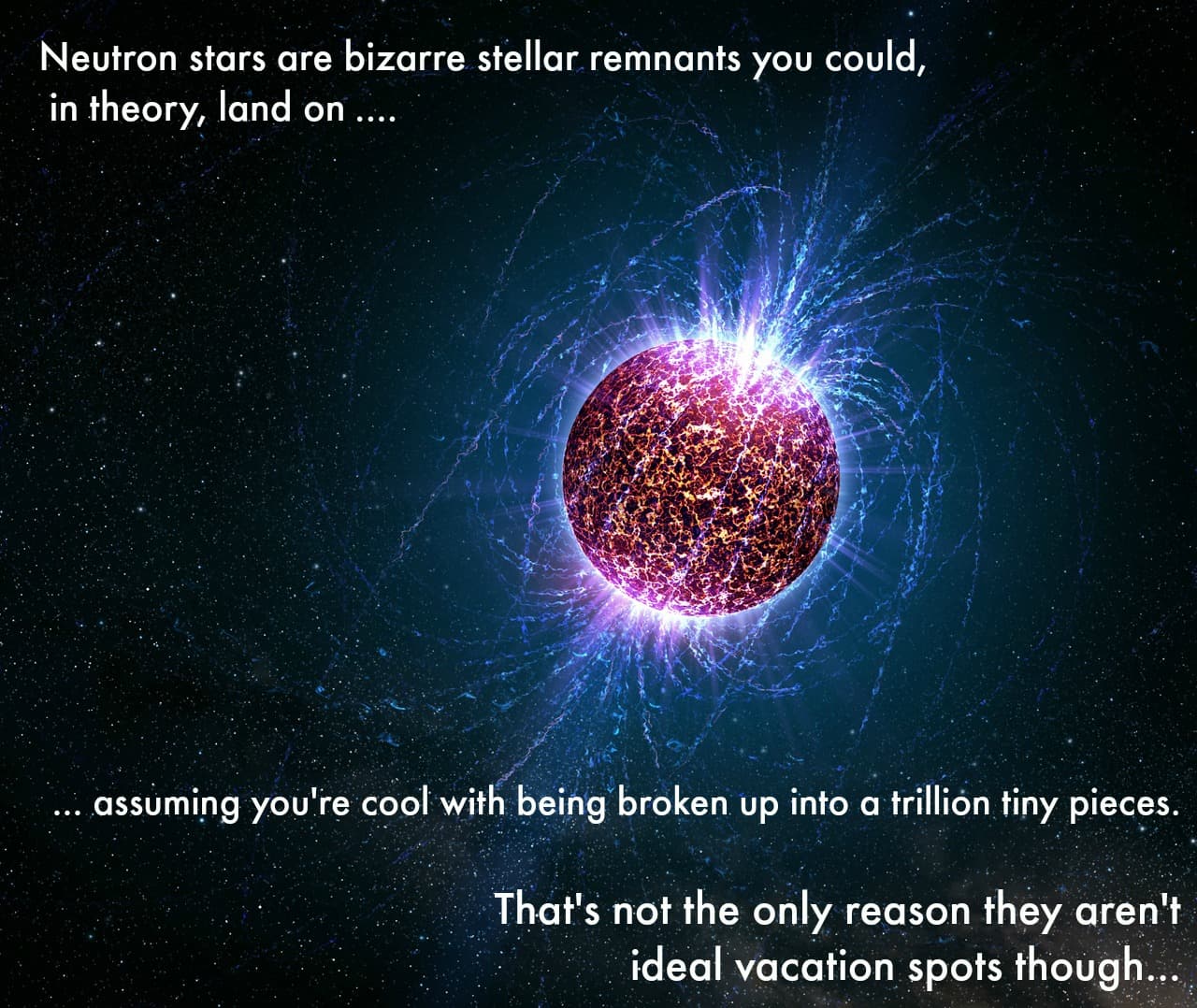 Let’s talk about what it would be like to spend a day on a neutron star. I know that this might not seem like the best vacation spot; after all, neutron stars are rather small. However, these objects are remarkable, and also terribly bizarre (imagine our Sun being compressed to the size of Chicago, and you begin to understand just how remarkably bizarre neutron stars are). Even though they are tiny, typically only about 25 km (15 mi) in diameter, neutron stars are more massive than our sun.

And of Course, a Small Diameter + a High Mass = Super High Density.

IBut unfortunately, your vacation to this remarkably bizarre object will be a bit short. You see, most neutron stars rotate rather fast. Excessively fast, in fact. A typical neutron star rotates about 40,000 times a minute; since a “day” is determined by how long it takes an object to complete one rotation, a day on a neutron star whizzes by in just a fraction of a second.

So only plan on spending a day on a neutron star if you have super great time management skills; by the time you landed, you'd have to leave as your day would be over.

Another remarkably bizarre part of a neutron star is the crust. Although it’s not very thick, generally about 1km or .6miles, the crust is approximately 100 billion times stronger than steel. So you shouldn’t go to a neutron star if you hope to spend your day building fantastical sandcastles—the crust of the star is simply too strong for you to break through with your tiny ineffectual shovel. Alas,  neutronstar-castles will never be a thing.

But Wait! There Might be Some Hope for Neutron-Star-Castles!

Scientists believe that neutron stars have something called “starquakes.” A starquake occurs when forces welling within the star cause cracks in the crust, kind of like an earthquake on our own planet. However, even if you could grasp a bit of stellar matter during a starquake, you wouldn’t be able to lift it in order to make a fantastical neutronstar-castle. Since neutron stars are so dense, a teaspoon of this matter would weigh about 100 million tons on Earth (of course, the gravitational pull of a neutron star is so strong that you will be a pancake…probably flatter than a pancake. So not being able to build a neutron-star-castle will be the least of your worries).

Okay, so maybe there’s no hope for neutron-star-castles…

Since I’m already being a Debbie Downer, I might as well tell you about breathing. Luckily, neutron stars have an atmosphere. Unfortunately, it is a very tiny atmosphere (made mostly of iron 56 and lighter elements, which is not so fun for breathing). These atmospheres are generally believed to be just a few centimeters thick; however, when you think about it, the tiny atmosphere is kind of cool. If you took a step on a neutron star, you would be walking above the atmosphere. Assuming, of course, that you could walk…or stand...which you couldn’t.

Oh, and don’t forget the heat. The surface of a neutron star is initially about 1 million degrees Celsius (1.8million Fahrenheit). These temperatures would make even the most avid sun tanner cringe, and by “cringe” I mean “instantaneously vaporize.” But don’t let the temperatures turn you off; a neutron star is a great place to visit if you want to go out in a blaze of glory (editor’s note: sadly, we can only guarantee the “blaze,” not the “glory”).

Well, at Least There Will Be Mountains to Look At?

I know—since the gravitational field of a neutron star is so high, you probably assume that the stars will be pulled into nearly perfect spheres. A logical assumption. However, you know what happens when you assume? No? Then I’ll tell you: when you assume, From Quarks to Quasars has to come along and use their keen intellectual abilities to set you on the right path.

And in 2008 a team of Australian scientists revealed that neutron stars could have mountains. If a neutron star has an orbiting companion from which it pulls matter, this matter will likely accumulate at the poles, ultimately creating mountains. Imagine, mountains on stars; it’s impressive isn’t it?  Unfortunately, these mountains aren’t the best for climbing.

There would also be a problem with the landing. Neutron stars have an escape velocity of about 33% the speed of light. Which means that any object caught in a neutron star’s gravity would be accelerated to a tremendous speed. If you are not ripped apart during your descent (you would be), all of your atoms would most likely be destroyed upon impact. Essentially, you would be turned into a pile of neutrons.

So to recap: you will be vaporized by the intense heat, squashed flat by the gravitational forces, and transformed into a goop of neutrons. But if that’s not an experience you could blog about, then I don’t know what is.

Wonder what it would be like to spend a day in a black hole? (Far less fun than a neutron star) Find out.