Life: It is All Left-Handed, and We Don't Know Why: 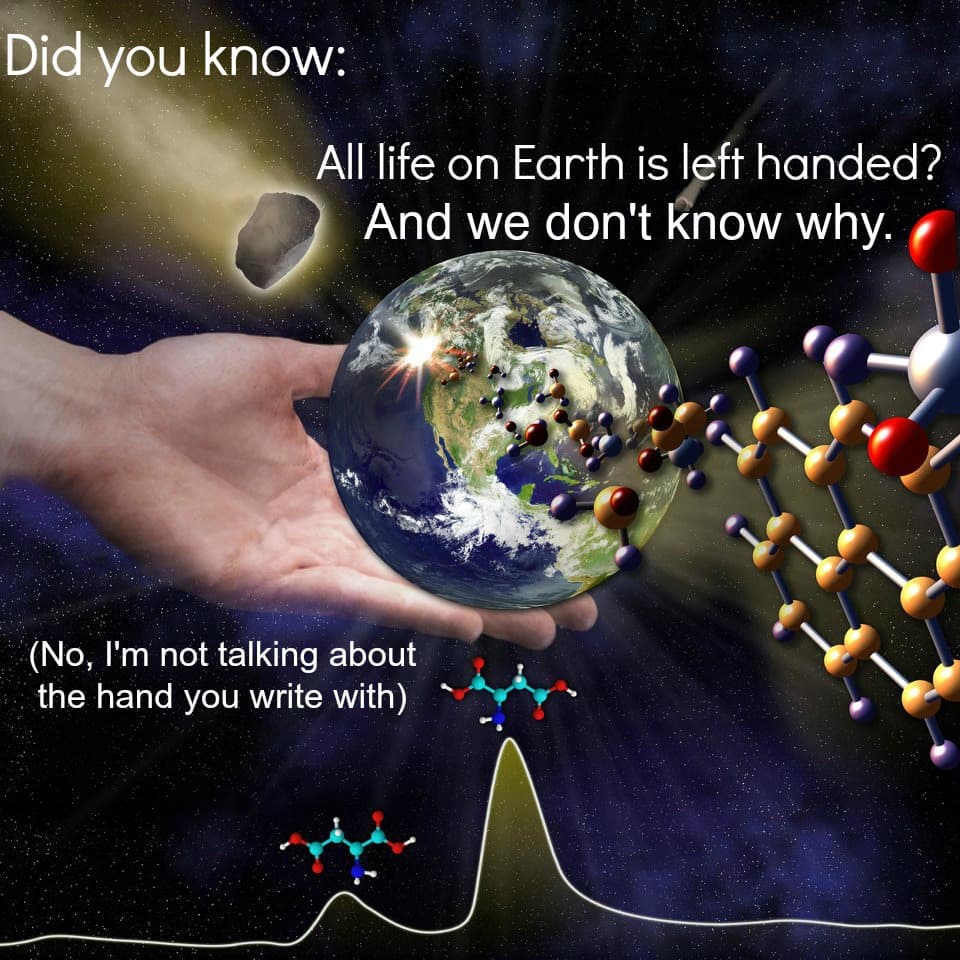 Ever since scientists first looked at the structure of the amino acids that make up life on Earth, they had a mystery on their hands. Virtually all life on Earth is “left-handed” – and, no, I’m not talking about the hand you write with.

These molecules responsible for allowing life to exist are ‘chiral,’ which basically means each molecule comes in two forms that are mirror images. Based off the configuration of these amino acids, they are either ‘left-handed’ or ‘right-handed’ – the molecule doesn’t change at all, the only difference between one handedness and the other is the amino acid is a mirror image. In theory, it should be just as easy to make right-handed amino acids as left-handed amino acids, yet, when we look at life on Earth, we tend to exclusively favor the left-handed variety.

Now, the question is ‘why.’ After all, our lab experiments in the field of abiogenesis have simulated conditions on the primordial Earth and produced nearly an equal amount of right and left handed amino acids.

That result is one of the main things stopping scientists from proclaiming they discovered how life probably got a start on Earth – all because the amino acids produced in the experiment aren’t the same types and handedness of the amino acids we see in everything around us.

One possible solution deals with the interaction of light with amino acids in space. This is where circular polarization comes in. Electrical polarization is a fancy way of describing an electromagnetic field that doesn’t change in strength but, rather, changes direction in a rotational fashion. Depending on the direction of the circular rotation, the light itself could potentially unravel molecules of one handedness giving a preference to the lucky left-handed survivors.

This type of polarization has been observed in the Cat’s Paw nebula, located in the constellation Scorpius about 5,500 light-years away. A team of astronomers at the National Astronomical Observatory in Japan discovered that about 22 percent of the Cat’s Paw was circularly polarized. This suggests that circular polarization may be a common feature of star formation and could potentially have strong implications on the handedness of life that can arise.

In concert with these findings, astronomers also know that the chemical reactions required to build amino acids can happen in space. If amino acids were forming in the midst of this circular polarization, the handedness favored by the direction of the polarization would certainly form much better and much more frequently than the mirror image.