Learn How You Can Name An Exoplanet 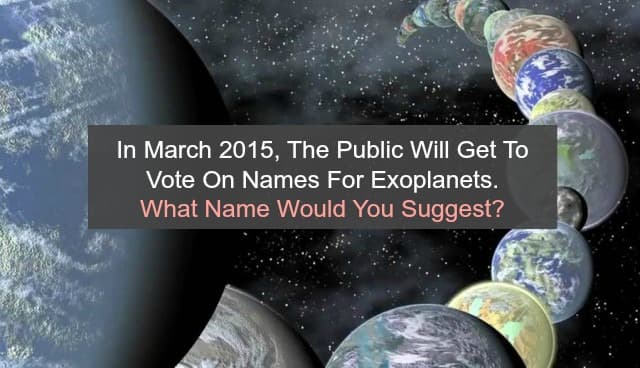 Exoplanets don’t have names as you and I normally think about them. Instead of being called things like Apollo, Gandalf, or Vulcan (all astoundingly cool names), exoplanets receive a name similar to a license plate– such as GSC 06214-00210 b, HAT-P-27-WASP-40 b, HD 45364 b, or Kepler-9 d. Often times, these names are packed full of useful information about the planet, such as its location in the sky and information about the survey that discovered it.

But what happens when you want to give a planet a ‘real’ name?

This is where the IAU (the International Astronomican Union) comes in. The IAU is the only body allowed to designate official names for celestial objects. The society consists of 10,871 active professional astronomers representing about 93 nations (of which, 73 are national members). One of the IAU’s mission objectives, as listed on their website, is to “serve as the internationally recognized authority for assigning designations to celestial bodies and surface features on them.” The IAU has a complicated list of rules governing how objects and features are named – they also frequently ignore the wishes of the discovering scientists.

Now, the IAU has decided to let the public have some say (and registration to pick names has just opened!)

The IAU has picked a list of 305 worlds that were discovered before Dec. 31, 2008 as a starting point for the naming process. Their list is published on the NameExoWorlds.org website

Astronomy clubs and nonprofits that wish to name the alien worlds can vote for the top 20 to 30 exoplanetary systems they want to name in October. In December, the groups will submit their proposals for names. After this, the public will get to rank the top names.

The IAU has set some ground rules for organizations that plan to submit names (so we don't end up with a planet called "poop" or something silly):

If you got to pick a name, what would you suggest?