Luckily, nobody was hurt — but something about this fire doesn't add up. 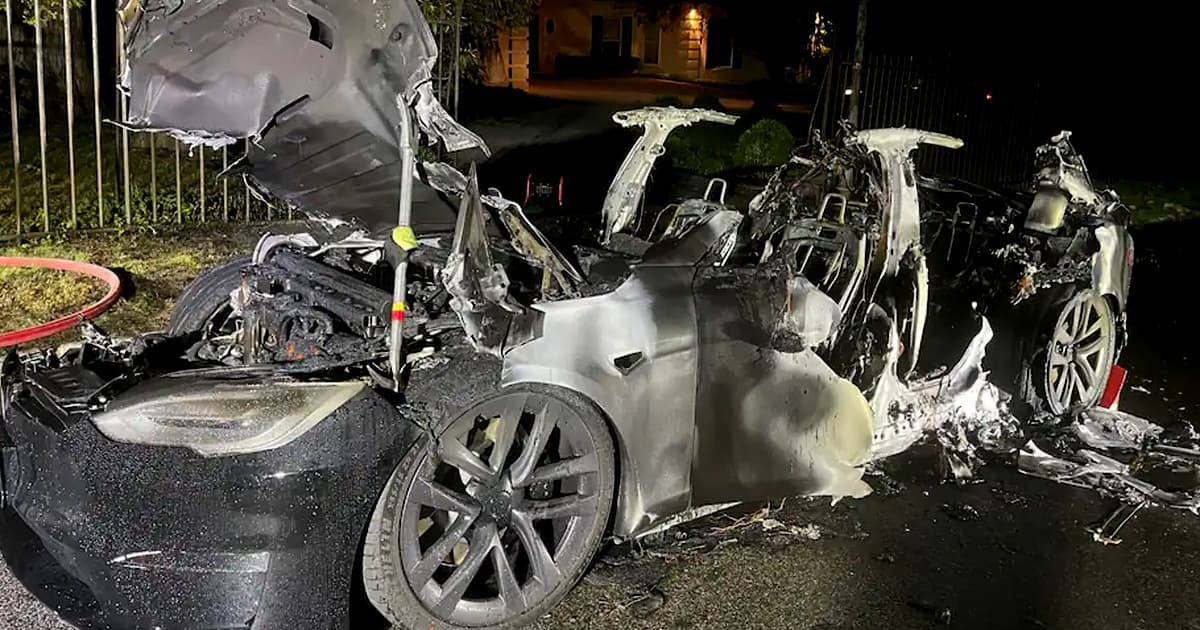 Just weeks after Tesla officially started deliveries of its new sporty sedan, one of the first Tesla Model S Plaid vehicles on the road has gone up in flames — and in a lawsuit, the driver says that the vehicle's high tech door handles briefly trapped him inside thanks, The Washington Post reports.

The local fire department told the Post that it had to battle the flames for two hours. A Gladwyne Fire Department news release detailing the crash was put up, but promptly taken down by Thursday, as the Post notes.

It may well be yet another instance of a Tesla owner finding themselves trapped after an accident, highlighting possible safety shortcomings of the car company's offerings. But crucial details surrounding the crash remain murky — including the name of the driver — which casts a shadow on what really happened.

It's not the first time the safety of Tesla's Model S door handles has been called into question. In 2019, the family of a driver who died in a crash involving a Tesla Model S sued Tesla, blaming the vehicle's retractable door handles for the driver's death. The driver was reportedly trapped inside the burning vehicle, with first responders unable to get inside.

This week's crash involved an electronic malfunction with the interior door handles, according to the suit.

"He’s in the car, he smells and sees the smoke, turns around and sees the smoke is filling up the cabin, then flames, and reacts almost immediately," Mark Geragos, one of the driver's lawyers, told the Post. "The door malfunctions, he gets out and somehow the car is still running [down the road] according to witnesses as he’s trying to get away from the car."

"And within moments of him getting out of the car, the car is engulfed in flames," Geragos added.

Another of the driver's attorneys, Jason Setchen, told the newspaper that "he tried to get out of the vehicle; he was pushing the door frantically and it would not engage. He was able to push the button again and lean against the door very hard and that’s when it opened up."

The exact cause of the fire remains unclear. Another strange claim that's been circulating, that the vehicle was still moving while in flames, is also rather odd, as Jalopnik points out, as it's difficult to recreate the scenario. A driver would probably have had to intentionally fooled the Autopilot into thinking somebody was in the driver's seat.

Local fire department chief Charles McGarvey wasn't able to confirm to Jalopnik whether the vehicle was indeed moving on its own while on fire.

The National Highway Traffic Safety Administration is now looking for more information on the incident.

"If data or investigations show a defect or an inherent risk to safety exists, NHTSA will take action as appropriate to protect the public," a spokeswoman told the Post.