One of the Largest Structures in the Universe: 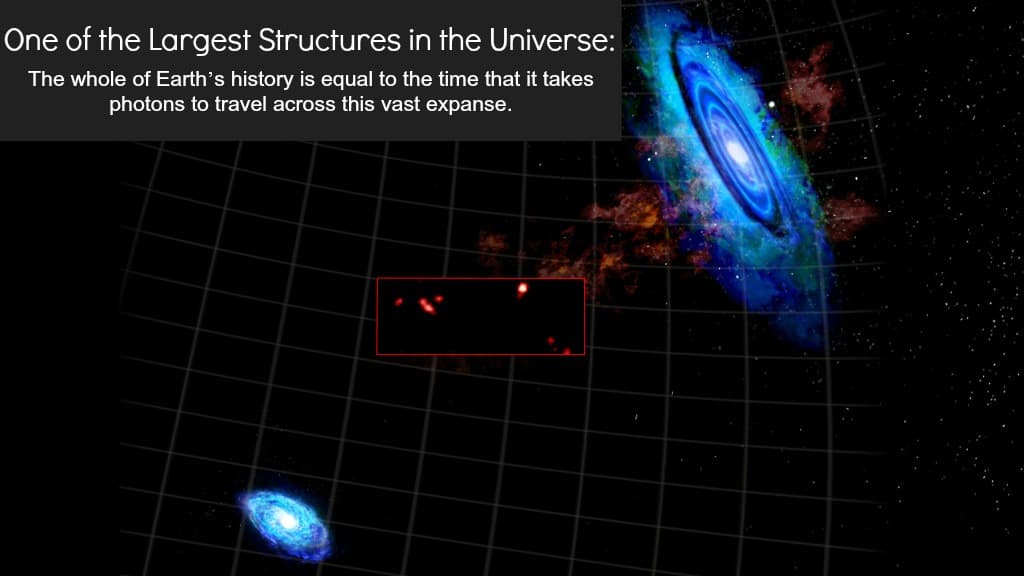 Astronomers recently discovered a group of active galactic cores that stretch more than 4 billion light-years end to end. The discover initially came in January 2013; the structure is a large quasar group (LQG). And it is simply massive.

Moreover, the Earth itself is a little more than 4 billion years old. So, in the time that it takes light to travel from one end of this structure to the other: the Earth formed and cooled, life developed, dinosaurs sprang into existence and were summarily obliterated, humanity evolved, civilization developed, and I typed this article whist drinking tea. In essence:

The whole of Earth’s history is equal to the time that it takes photons to travel across this vast expanse.

Quasars tend to assemble in large groups, but the largest of these clusters are typically 600 million light-years wide. The newly discovered LQG is composed of 73 quasars and, at 4 billion light-years, it makes other LQG’s look like nothing more than tiny cosmological blips.

In fact, this LQG is so large that it could upend modern cosmological theory. This cluster seems to violate the widely accepted cosmological principle, which holds that the universe is essentially homogeneous when viewed at a sufficiently large scale. According to this principle, structures larger than about 1.2 billion light-years should not exist. Now, this does not mean that science has fallen apart. It simply means that there may be some things we don't fully grasp just yet (to anyone who truly understands science, this is nothing new).

Study leader Roger Clowes, an astronomer at University of Central Lancashire, noted the problem posed by this LQG: “It could mean that our mathematical description of the universe has been oversimplified, and that would represent a serious difficulty and a serious increase in complexity." Of course, scientists are still analyzing and trying to pin down the exact nature of this superstructure.

But one is forced to ask, could something even larger be lurking in the cosmic void? If so, what does this mean about our understanding of the universe?

Ultimately, it seems that this amazing structure is not the only LQG that defies our understanding of the structure of the universe -- there are monsters spanning 10 billion light-years, and chances are, these LQG are not the largest in existence (but only the largest that we have seen thus far).  And only time can tell what impact these LQG will have on our understanding of the universe.