Laika: The First Earthling in Space 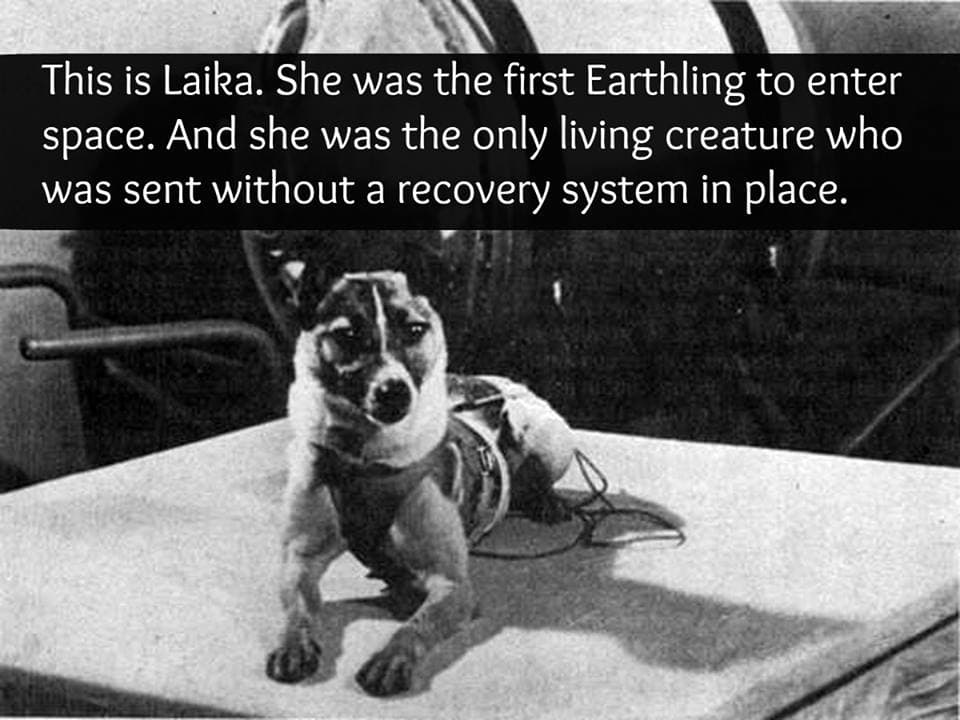 Not all scientific achievements are made by man. In fact, one of the greatest accomplishments was made by a dog. Meet Laika, the dog who—quite literally—went where no man had gone before (or woman, for that matter). In 1957 the East and West were embroiled in the Cold War. Locked in this power struggle, nations were vying for supremacy on land and sea…and among the stars.

Cue the Space Race: In November of 1957, the Russians planned to launch Sputnik 2, their second Earth-orbiting satellite. After the success of Sputnik 1 (the first satellite to orbit the Earth), the Russians hoped that Sputnik 2 would provide invaluable information regarding the impact that spaceflight would have on living passengers. The main aim of the project was to determine whether humans would be able to tolerate weightlessness and survive being launched into orbit. Of course, it would be cruel to send humans into space without knowing whether or not they could survive the trip.

Enter Laika: A two year old Husky mix, Laika was a stray that was found wondering the streets of Moscow. Since she was a stray, Laika was used to living under harsh conditions. Moreover, she had a calm and quiet temperament; couple this with her small size, and Laika was the ideal candidate for spaceflight.

Making provisions for Laika’s safe return would have taken time. Focused on beating the United States in the Space Race, time was one thing that the Russians did not want to spare. So Sputnik 2 was not designed to be retrievable. Laika was never meant to return to Earth. Several days prior to the launch, Dr. Vladimir Yazdovsky, one of the lead scientists working on the mission, took Laika home to play with his children. He later stated, "I wanted to do something nice for her; she had so little time left to live.”

Then, on November 3rd 1957, Laika made history by becoming Earth’s first space traveler. Originally, Laika was expected to live for roughly a week. However, shortly after entering orbit some of the thermal insulation tore loose, causing interior temperatures to reach 40C (104F). Due to the extreme temperature, and the extraordinary amount of stress on the little dog, Laika almost certainly died during the first day of flight, most believe she perished just a few hours after launch.

Sputnik 2 orbited a total of 2,570 times. On April 14, 1958, after nearly162 days in orbit, Laika’s craft reentered Earth’s atmosphere and burned. In 1997, the Russians made a monument to honor fallen Soviet cosmonauts. Peering out from behind the statue, an image of the tiny canine. Her name was Laika. She was the first Earthling to enter space, and she was the only living creature who was sent without a recovery system in place.