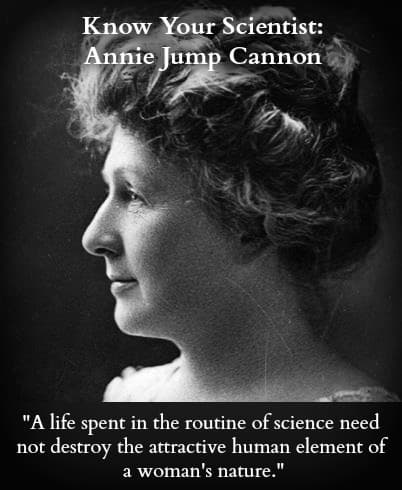 "Classifying the stars has helped materially in all studies of the structure of the universe. No greater problem is presented to the human mind. Teaching man his relatively small sphere in the creation, it also encourages him by its lessons of the unity of Nature and shows him that his power of comprehension allies him with the great intelligence over-reaching all."

Unlike many important scientists throughout history, Annie isn't that well known, but the work that she did most certainly is. In a time when women were supposed to be modest, motherly, kind—when they had a "separate sphere," a domestic sphere that was distinct from science and learning—Annie worked to show that one could be a woman and a scientist (that one need no adopt "preform masculinity" in order to be taken seriously).

Annie was the eldest of three daughters; the first born of Wilson Cannon and Mary Jump. It was Annie's mother, Mary, that got Annie interested in astronomy in the first place. She would take her daughter out at night and show her the constellations in the sky. It was because of this interest in astronomy that Annie went on to study physics and astronomy at Wellesley, one of the most prestigious schools in the U.S at the time, graduating in 1884. The time that Annie spent in Wellesley did take its toll. She didn't take to the cold very well and contracted scarlet fever, which left her nearly deaf.

After a decade away from astronomy, and the subsequent death of her mother, Annie became a junior physics teacher at Wellesley under Sarah Whitting, and a "special student" at Radcliffe. In 1892 Annie made the trip to Europe to photograph the solar eclipse, this is what began the eventual progress of her towards photography. Annie began studying again at Wellesley while she was teaching; this time, focusing on photography. Annie obtained her M.A in spectroscopy and photography from Wellesley in 1907.

In 1896, Annie joined the Harvard College Observatory and her job there was to go through the data and take observations, not unlike any other astronomer. Although her hearing problems made it difficult to get work for the decade that she was living with her family before her mother died, this gave her great "powers" of concentration, patience, as well as a very good memory. So although her hearing loss impeded her in many ways, she eventually turned this around and it ultimately assisted her in becoming the amazing astronomer that she was.

Annie classified more than 500,000 stars, published many many papers, discovered some 300 variable stars, 5 novas, a spectroscopic binary, and SS Cygni (a dwarf nova which repeats itself every 60 days).

Annie Jump Cannon was truly a remarkable woman, the words of Hawlow Shapley that he gave when he awarded Annie with the Draper Award said it very well:

"The benign presence of the Brick Building, noted collector of degrees and medals, author of nine immortal volumes, and several thousand oatmeal cookies, Virginia reeler, bridge player, and, especially, the recipient of the Draper Medal of the National Academy of Science - the first medal ever bestowed on a woman by the honorable body of fossils and one of the highest honors attainable by astronomers of any sex, race, religion, or political preference."