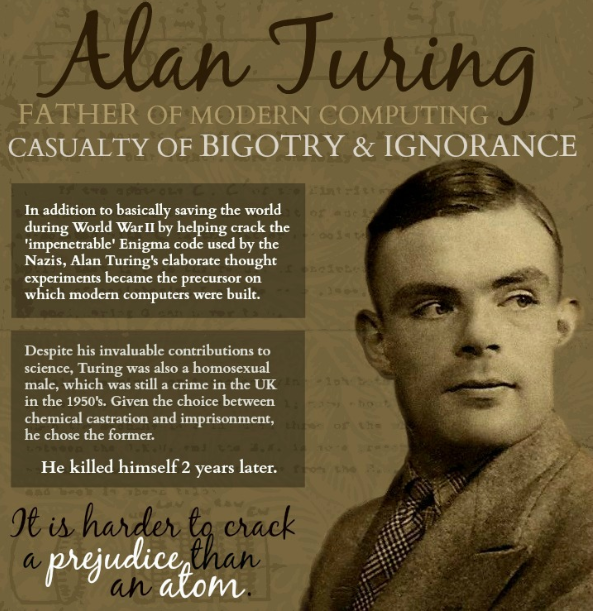 Turing cracked the unbreakable German Enigma codes during World War II, shortening the duration of the war and 'saving countless lives,' according to British Prime Minister David Cameron. Turing was arrested in 1952 for homosexuality, and tried and convicted of' 'gross indecency.' Homosexuality was a crime in Britain in the 1950s, and Turing was given a choice between prison and chemical castration. The latter involved a series of estrogen injections for one year. He chose chemical castration, received "treatment" for his "disorder," but two years later, he was found dead of an apparent suicide. He was 41 years old.

Turing was born on June 23, 1912, in London, England, to a well-to-do middle-class family. His parents had met and married in India and Alan’s father, a British member of the Indian Civil Service, spent much of his life abroad. When Alan was about one year old, his mother joined her husband in India, leaving Alan and his elder brother to the care of friends of the family.

Turing attended British public schools (which are in fact private and exclusive), first at St.Michael’s in St.Leonard-on-Sea, and then at the famous Sherborne School in Dorset. Alan was a product of British public school culture, where sensitive and vulnerable individuals are often subject to the typical public school regimen of humiliation and isolation from society at large. They often become eccentric and reclusive, or, as Andrew Hodges writes of Turing, "shabby, nail-bitten, sometimes halting in speech and awkward of manner."

It was at Sherborne, that Turing became aware of being gay and he fell in love for the first time. It was also at Sherborne that he showed his natural inclination for mathematics and science, solving advanced math problems, theorizing on relativity and quantum mechanics, and winning every possible mathematics prize.

From 1931 to 1934, Turing studied at King’s College, Cambridge, where he was awarded first-class honors in mathematics. Soon after his graduation, he was elected a fellow at the College.

In 1936, Turing published his sensational paper "On Computable Numbers, with an application to the Entscheidungsproblem" in which he introduced his readers to an abstract machine, which we now call a 'Turing Machine.' Turing machines are computational devices that help determine the extent and limitations of what can be computed. They are not physical objects but mathematical ones that are capable of computing anything that is computable when they are provided with an algorithm (or a program). The central concept of the modern computer is based on Turing’s machine. Time magazine, in an article on the "100 Most Important People of the 20th Century," wrote: "The fact remains that everyone who taps at a keyboard, opening a spreadsheet or a word-processing program, is working on an incarnation of a Turing machine." [Quotation Reference]

In 1936, Turing continued his studies at Princeton University, where he worked on his Ph.D. under the supervision of Alonzo Church, whose definition of computability coincided with his own. In addition to his mathematical work at Princeton, he studied cryptology. After receiving his Ph.D. in 1938, he returned to Great Britain and started working at the Government Code and Cypher School.

After the British declared war on Germany in 1939, Turing took up full-time work at the cryptanalytic headquarters at Bletchley Park (Buckinghamshire, UK), deciphering German Enigma codes. The German Enigma machine settings, which were used for encoding Nazi communication, changed daily, making his job daunting. Together with fellow mathematician W.G.Welchman, Turing developed the 'Bombe' -- a special electro-mechanical machine that automated computations and made deciphering speedy and accurate (the machine had an array of cylindrical drums that made ticking noises as they spun, hence the name 'bombe'). In 1945, Turing was awarded the OBE (Order of the British Empire) by King George VI for his contribution to the war effort.

At the end of the war, Turing was invited by the National Physical Laboratory in London to design a computer. Turing proposed the ACE (Automatic Computing Engine) which was dismissed by his colleagues as overly ambitious. ACE was in fact a blueprint for stored-program computers and was never built.

Turing returned to Cambridge in 1947 where his wide-ranging interests and intellectual curiosity led him to explore neurology and physiology. In 1948 he was offered a lectureship in mathematics at the University of Manchester, and in 1949 he became Deputy Director of the Computing Laboratory there, working on software for one of the first stored-program computers in the country – the Manchester Mark1. At Manchester, Turing began investigating the question of "whether or not it is possible for machinery to show intelligent behavior." He wondered if the computer, when programmed properly, could rival the human brain.

In 1950, Turing published a paper, called "Computing Machinery and Intelligence" which he began with a question -"Can machines think?" In his attempt to avoid the elusive definitions of both 'machine' and 'intelligence,' Turing posed another question - "Can machines do what we (as thinking entities) can do?"

In this paper, Turing introduced the "machine-human question-answer test," now known as the Turing Test. The test that he proposed was inspired by a party game called the 'Imitation Game.' In this game a man and a woman go into separate rooms and guests try to tell them apart by writing questions and reading their typewritten answers. The goal for both the man and the woman is to convince the guests that they are the other. In his paper, Turing suggested an alternative formulation where the guests are replaced by a judge. A machine, which is designed to imitate human behavior, takes the part of a woman or a man. If the judge cannot tell the machine from the human, the machine passes the test.

The Turing test has become an essential concept in the philosophy of artificial intelligence and has raised many arguments since it was proposed in 1950. Numerous versions of the test have been performed over the years and the number of chatterbots has increased exponentially (a 'chatterbot' is a computer program designed to simulate an intelligent conversation with a human; they can be incorporated in smartphone apps). Since 1991, there has been an annual Loebner Prize in artificial intelligence which uses the Turing test to award the prize to the chatterbot that judges consider most human-like.

Many people who use the internet today are familiar with a reverse form of the Turing test called CAPTCHA (it stands for 'Completely Automated Public Turing Test to tell Computers and Humans Apart'). The CAPTCHA test displays distorted graphic images of letters and numbers and asks you to type them. It is intended to prevent automated systems from being used to abuse the site.

From 1952 until his death in 1954, Turing worked on what he described as the mathematical theory of morphogenesis, putting forward a hypothesis of pattern formation and of growth and form in biology. He wanted to understand the existence of Fibonacci numbers in plants, and how symmetrical cells grew into non-symmetrical arrangements.

Alan Turing’s work and life ended on June 7, 1954. He was found by his cleaner the next day and an inquest determined that he committed suicide. Some of his biographers and family members have questioned this verdict.

Turing’s genius and his extraordinary life have inspired works of fiction and art – his biography by Andrew Hodges (1983), his mother’s memoir "Alan M. Turing" (1959), the play "Breaking the Code" (1980) by Hugh Whitemore, a TV movie "Breaking the Code" (1996), a musical "The Universal Machine" (2013), and an upcoming film about Turing, called "The Imitation Game," which will star Benedict Cumberbatch and Keira Knightley.

Rectifying the Mistakes of Our Fathers:

Before Turing received his posthumous pardon from the Queen in December 2013, he received an apology from the British government on September 10, 2009. Then British Prime Minister Gordon Brown, in an attempt to correct the historical “gross indecency” of Turing’s persecution, said the following about Turing’s contribution to humankind:

"For those of us born after 1945, into a Europe which is united, democratic and at peace, it is hard to imagine that our continent was once the theater of mankind’s darkest hour. It is difficult to believe that in living memory, people could become so consumed by hate – by antisemitism, by homophobia, by xenophobia and other murderous prejudices – that the gas chambers and crematoria became a piece of the European landscape as surely as the galleries and universities and concert halls which had marked out the European civilization for hundreds of years. It is thanks to men and women who were totally committed to fighting fascism, people like Alan Turing, that the horrors of the Holocaust and of total war are part of Europe’s history and not Europe’s present. So on behalf of the British government, and all those who live freely thanks to Alan’s work, I am very proud to say: we’re sorry. You deserved so much better."

FQTQ Compiled this graphic to honor his memory, and to remind us that bigotry has no place in the frontiers of science:

This article is part of Know Your Scientist, a series on various influential scientists throughout the ages.