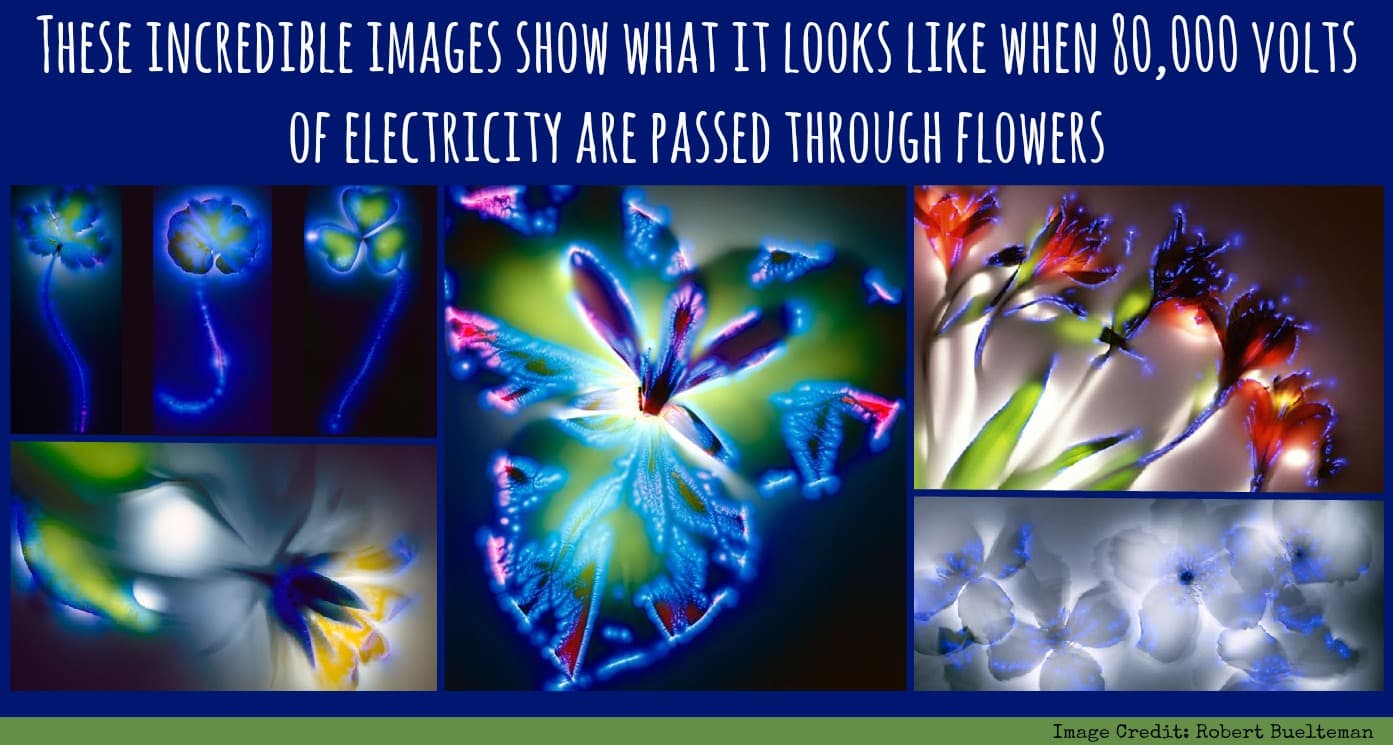 These images are the result of over 80,000 volts of electricity passing through a flower. While it sounds simple enough on the surface, the person who created the image - Robert Buelteman - has spent 60 + hours a week each week for the past 10 years to produce just 80 photographs.

To begin this incredibly complex process, Robert whittles down his chosen subject (in this case, a flower) until it is entirely translucent. The subject is then placed on a color transparency film, where it is covered with a diffusion screen.  Afterward; the product is placed on his "easel," which is made up of sheet metal that is sandwiched between plexiglass (the "easel" floats atop a concoction of what is primarily liquid silicone). When each step is fulfilled, Robert uses jumper cables and a car battery to pinpoint specific areas to focus an electrical charge on.

As the electric current passes through various plants, (which range from anything to roses, wildflowers, tulips, petunias to even marijuana leafs) --the subject emits radiation that is invisible to the naked eye. He passes a fiber optic cable that emits a beam of white light just the size of a single strand of human hair over the electrically charged plant, which captures the image onto film, making the electric charges pulsating through the beautiful flowers observable to human eye.

As you can see in this image and the rest that are linked to at the bottom, there is a blue haze that is visible on the outer edges of every leaf, petal and stem of the subjects. This is actually gases that are in the process of ionizing as the plant is being electronically shocked, leaving behind ethereal coronas. He then hand-PAINTS the fruits of his labor (see what I did there?) using the optical fiber -- a process that is so tricky, it can take over 150 attempts to get just right. Even so, Kirlian photography is so dangerous, most people are unwilling to try it. (MEANING: DO NOT TRY THIS AT HOME! If you must, be safe about it) It is for this reason, Buelterman has erected a protective wooden frame that surrounds his easel, but you know what they say? If you play with electricity, you're bound to get shocked (okay, so I just made that up, but you get the idea).

More information can be found in Buelterman's book, "Signs of Life."