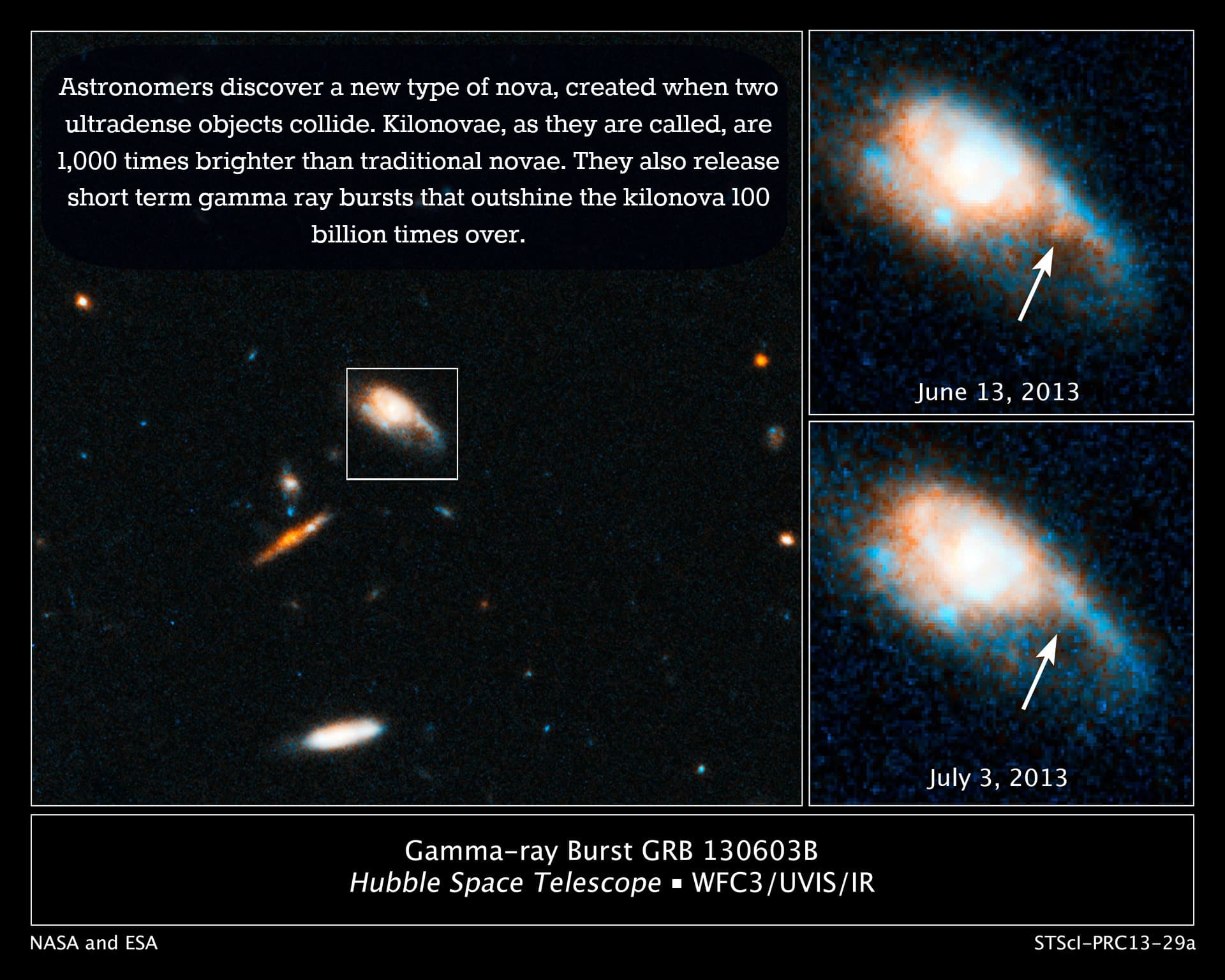 Pretty much everyone (myself included) loves supernovae. After all, they are some of the most beautiful and destructive cosmological events that we know of. Moreover, they are partly responsible for our existence (as most heavy elements are created and distributed throughout the cosmos during this process). In addition to creating the elements necessary for our survival, these events give life to several  bizarre objects (like neutron stars, pulsars, and stellar-mass black holes). However, many people are unaware of the fact that supernovae are just one particular type of nova.

In fact, supernovae can be created through different methods. Recently, astronomers discovered tangible evidence of a previously unseen-brand-spanking new type, which was tentatively dubbed the "kilonova." Novae of this type are likely created when two ultra compact objects collide. Consequently, these collisions give us insight into a celestial mystery called "short-term gamma-ray bursts".

The first proof of the existence of kilonovae came just last month, as NASA'S "Swift Space Telescope" noticed an extremely bright gamma-ray burst, located more than 4 billion light-years from Earth. The burst, cataloged by NASA as "GRB 130603B," lasted merely one tenth of a second  (classifying it as a short-term gamma-ray burst). After this event, another flash was noted, one that was 100 billion times less luminous than the gamma-ray burst seen just moments earlier.

This may not sound very bright, but keep it in mind that kilonovae are thought to emit 100 billion times more light than other, more conventional types of nova -- like the explosion that occurs when white dwarfs (remnants of sun-like stars) experience flares. So something that is 100 billion times less luminous than a kilonovae is still pretty luminous.

Previously, astronomers had good reason to believe that supernovae are responsible for long duration gamma-ray bursts [GRBs], which generally last about two seconds. The GRBs are generated through ripples in spacetime, called gravitational waves, which occur when spacetime becomes warped by the interactions between two ultradense objects. The tiny ripples act as a catalyst for drawing the stars closer together, where their mutual gravitational pull will ensure that the objects eventually collide, releasing large quantities of radioactive material that comprise the high-energy beam of radiation emitted from the star (this radiation is so destructive, it could cook a planet like Earth, assuming the axes of rotation [where the gamma ray shoots out from] are pointed toward the planet).

However, such an event could not account for the mystery of short-term gamma-ray bursts. But Hubble took to the sky, probing the region where Swift originally spotted the kilonova and its gamma-ray burst, finding that the site correlates to the predictions they made about the aftermath of such a collision between two compact objects merging. According to the team, this observation finally solves the mystery of the origin of short gamma-ray bursts."