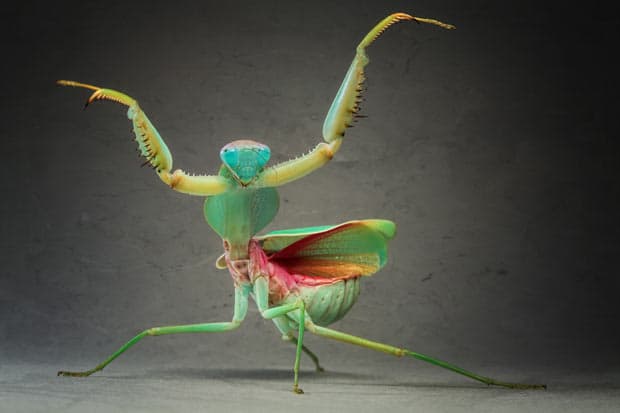 Praying Mantes are so named for their long front legs, which are bent in a way that make it look as though they are having a spiritual moment; however, praying mantes aren't exactly the peaceful creatures that you might expect them to be. These little guys are actually formidable predators. Typically, they feast on flies, crickets, and moths; however, that are capable of taking out birds.

The praying mantis (more properly called the "praying mantids," as the "mantis" refers to the genus mantis, of which only some praying mantids are a part) has long spikes on the end of its legs that allow it to capture its prey and hold it in place. Moreover, its amazingly fast reflexes enable it to best most of its opponents and bring them down quickly. Often, the mantis has attacked and killed its prey before the prey even has a chance to react. If that's not enough, praying mantids are camouflaged to match the grass and plants that their prey frequents, so they are nearly impossible to spot. And they can turn their heads in 180 degrees to see their entire surroundings. This process is made even easier because of the assistance that they get from their two large compound eyes... and the three other simple eyes that are located between them.

Oh, and they have also been known to eat Gecko.