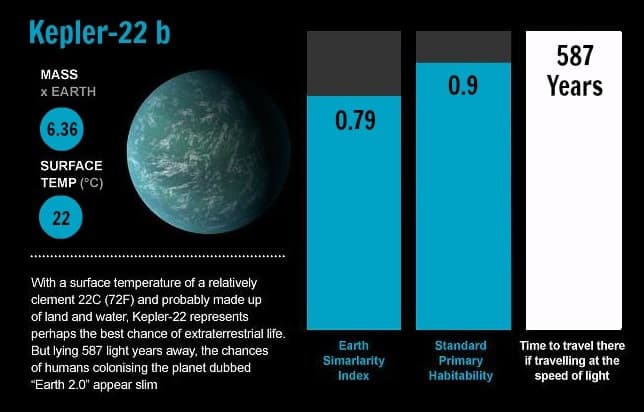 Amongst the many potentially habitable exoplanets, Kepler-22b is probably the most promising. Because of this, the planet is extremely celebrated, but the reason for this is two-fold. You see, the planet was the first habitable exoplanet discovered by the Kepler Space Telescope; the mission used to scour the sky, in search of telltale signs of alien worlds.

THE MEANING OF HABITABLE:

Before we go any further, first, let's discuss the habitable zone. This is the location in which a planet needs to be in order for liquid water to persist on the surface (a requirement for carbon-based life forms).

We can't just shoehorn any planet located within this region to fit the definition of habitable though (there is nothing 'one size fits all' about it), as it depends on a number of factors.  One of them is the star’s variability.  Habitability also depends on whether or not the planet in question has an atmosphere protecting the surface from its parent star's stellar wind.

In addition to its various notable attributes, Kepler-22b is also the smallest planet found to orbit in the middle of the habitable zone around a sun-like star, Kepler 22. The planet, which is 2.4 times the size of Earth, is of unknown composition, but it’s very possible that the planet has clouds in its atmosphere.  After the planet’s discovery in 2011, astronomers noted that the planet’s temperatures are very similar to Earth’s. They estimated that the surface temperature is a balmy 72 °f (22° C).

Kepler-22b makes one full orbits around its parent star  every 290 days, and it is about 0.85 AU (1AU=149 597 870 700 m, or one Earth-sun distance) away. This essentially means the planet is about 15% closer to its star than Earth is to the sun. This is okay, as the star is a little bit less luminous (about 25% less) than the sun. So, both factors even the other out. Furthermore, because of its density, astronomers think the planet might be some sort of a water world.

FINDING KEPLER 22B (& OTHER PLANETS):

The Kepler mission has discovered more than a thousand new planets since the mission was launched in March of 2009. Originally, it was meant to last until 2016, but late last year, two of its four reaction wheels failed and made normal operations impossible. Thus the primary mission was abandoned. Though, even now, the observatory is still at work on other tasks.

But when it was still in working order, it found Kepler-22b, and other planets, by looking for a decrease of light that occurs when a planet passes in front of its star from Earth’s perspective. This method, called the transit method, is like finding a needle in a haystack (in a field of haystacks). Imagine searching for a miniscule black spot obstructing a tiny bit of light emitted against the backdrop of a nuclear furnace. It's difficult (remember the transit of Venus that took place in 2012? It's kind of like that, only on a much larger scale).

As you might have already guessed, thanks to the above factors, Kepler-22b is a very important symbol for exoplanet hunters interested in finding Earth-like planets. Years of data collected by Kepler still needs to be to picked through, so it is very possible that the perfect Earth-like planet is floating somewhere in there.

Kepler-22b is located about 600 light years away from Earth, in the constellation of Cygnus. So as habitable as Kepler-22b might seem, as far as it is from us, it might not even exist anymore, or its features might be drastically different. And by the time we get there (if we do), we will probably forget why we were going there in the first place. So let’s try to keep our own planet in good-working order. Our future depends on it.