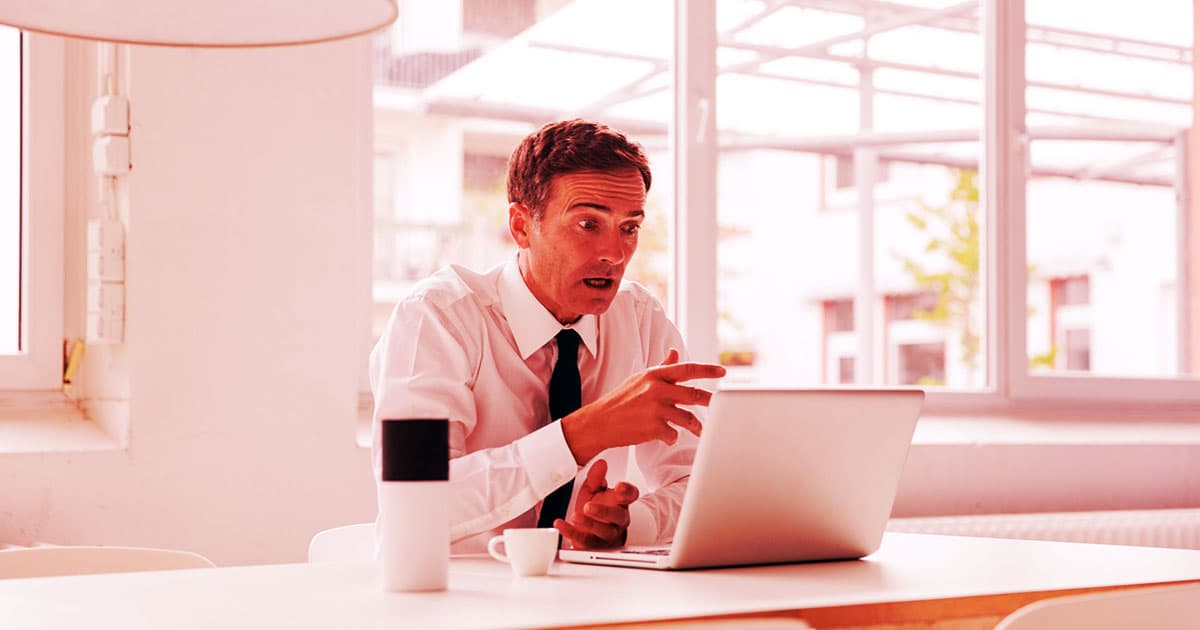 JPMorgan Chase, one of the most powerful financial institutions on planet Earth, says that it paid $175 million to acquire a fintech startup — only to discover, The Wall Street Journal reports, that the startup had allegedly fabricated the majority of its users, bolstering its value with millions of fake accounts.

Per the WSJ, the startup, called Frank — a financial platform for college students looking to apply for federal aid — approached JPMorgan in the summer of 2021. Impressed by the roughly 4.25 million users allegedly using the app, not to mention its formidable lineup of well-known VC backers, the bank bit, bringing both the platform and its founder, 30-year-old Charlie Javice, into the fold.

"Frank offers a unique opportunity for deeper engagement with students," Jennifer Piepszak, co-CEO of JPMorgan, said in a September 2021 press release. "Together, we'll be able to expand our capabilities for students and their families, helping them financially prepare for college and other major moments in their future."

Things seemingly went swimmingly until sometime last spring, when the bank apparently tried to send an email to Frank's alleged millions of customers. According to JPMorgan, an astonishing 70 percent of those emails bounced back, leading to an investigation against Javice and the company.

The results of that investigation, if true, are wild. The bank is alleging that Frank actually had less than 300,000 real users, which chalks up to less than 10 percent of the user figure that Javice had sold the site on. (In the court filing, JPMorgan provides correspondence between Javice and a professor that she allegedly hired to create the phony accounts.)

"To cash in, Javice decided to lie, including lying about Frank's success, Frank's size, and the depth of Frank's market penetration in order to induce JPMC to purchase Frank for $175 million," reads the bank's suit, filed late last year in a Delaware court. "Javice represented in documents placed in the acquisition data room, in pitch materials, and through verbal presentations [that] more than 4.25 million students had created Frank accounts."

It's worth noting that Javice actually filed her own lawsuit against the bank in the same week that the bank launched theirs, claiming that JPMorgan simply just didn't want to comply with user privacy laws and is now trying to conceal their own bad behavior.

"After JPM rushed to acquire Charlie's rocketship business, JPM realized they couldn't work around existing student privacy laws, committed misconduct and then tried to retrade the deal," Javice's lawyer and guy who is somehow just always there, Alex Spiro, said in a statement to Forbes. "Charlie blew the whistle and then sued."

"JPMC's newest suit is nothing but a cover," he added.

At the end of the day, it's all weird, and certainly reeks of "everything is make believe" energy. And sure, it's definitely not cool to sell anything based on lies, if that's indeed how the court battle shakes out. But this case is arguably less about the individual who sold that product, and more about the massively powerful financial institutions that run our lives.

There are a lot of people out there who label nothing as something and try to sell it. But at the end of the day, someone needs to buy it for it to really make a difference. When even the likes of JPMorgan can't seem to tell what's real, that's not exactly a good sign for the rest of us.

More on embarrassing purchases: It's Still Easy to Impersonate a Senator on Twitter after Elon Musk Promised Verification Was Fixed

Read This Next
Brands We Love
This Real Estate Platform Lets Investors Save Time and Money Like Never Before
Brands We Love
This Real Estate Investing Platform Is Democratizing the Way We Build Wealth
Brands We Love
Real Estate Investing Has Never Been Easier Thanks to Roofstock
Brands We Love
Investing In Rental Properties Is Hard. But This Investment Platform Makes It Easy.
Brands We Love
This Website Makes It Easy To Find The Best Investment For Your Money
More on Future Society
Bird Crap
Yesterday on the byte
It Looks Like Elon Musk Is Actually Building a Twitter Payment Platform
Balloon News
Friday on futurism
China Says "Spy Balloon" Soaring Over America Is Completely Innocent
Down in Flames
Wednesday on the byte
Elon Musk Apparently Thinks Twitter Is a "Flaming Dumpster Rolling Down the Street"
READ MORE STORIES ABOUT / Future Society
Keep up.
Subscribe to our daily newsletter to keep in touch with the subjects shaping our future.
+Social+Newsletter
TopicsAbout UsContact Us
Copyright ©, Camden Media Inc All Rights Reserved. See our User Agreement, Privacy Policy and Data Use Policy. The material on this site may not be reproduced, distributed, transmitted, cached or otherwise used, except with prior written permission of Futurism. Articles may contain affiliate links which enable us to share in the revenue of any purchases made.
Fonts by Typekit and Monotype.