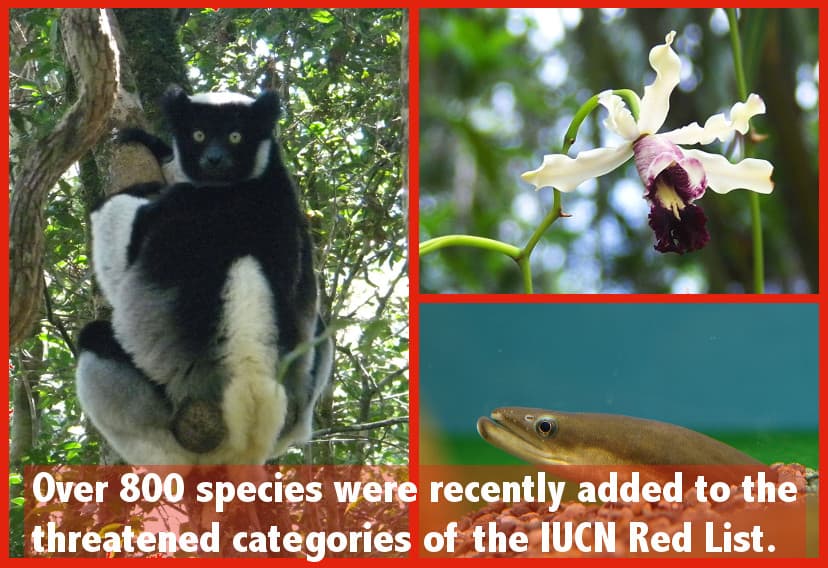 Over 800 species have been added to the threatened categories of the IUCN Red List in a recent update to the world’s most comprehensive list of species conservation statuses. Lemurs and slipper orchids were highlighted in the report from the International Union for the Conservation of Nature, which celebrates the 50th anniversary of the Red List this year. Assessments now cover 73,686 species, of which 22,103 are labeled as threatened or endangered. This serves as a vital resource to policymakers and a guide to prioritize global conservation efforts.

The new report finds that 94% of lemurs, a primate group endemic to the African island nation Madagascar, are now considered to be endangered. 22 of the 101 surviving species are critically endangered, including the Large-bodied Indri, the largest of the remaining species. This confirms what was more or less understood about the status of lemurs, which are under threat primarily due to habitat loss.

According to Russell Mittermeier, the Chair of the IUCN ' Primate Specialist Group:

"Madagascar has the second most diverse primate fauna on Earth, after Brazil, and, with more than 90% now considered threatened, the lemur fauna as a whole must be considered the highest major primate conservation priority on Earth. What is more, these animals are also great ambassadors for Madagascar, and the country's most distinctive and enduring brand."

"As such, they represent a very important economic asset for the country, with ecotourism, first and foremost focused on lemurs, having the potential to be Madagascar's number one foreign exchange earner and a critically important source of livelihood for the well-being of Madagascar's people, especially the rural poor. There is now optimism that new President Hery Rajaonarimampianina will take actions – implementing effective management of Madagascar's protected areas, creating more reserves directly managed by local communities, and establishing a long-term research presence in critical lemur sites – to reverse this decline."

Roughly half of the species added to the threatened list were plants. The report highlights orchids in particular, which are also threatened by habitat loss. The Cayman Islands’ national flower, the Banana Orchid, was found to be endangered after its first assessment, and around 80% of the globe’s temperate slipper orchids are also threatened with extinction.

"What was most surprising about this assessment was the degree of threat to these orchids. Slipper orchids are popular in the multimillion-dollar horticultural industry. Although the industry is sustained by cultivated stock, conservation of wild species is vital for its future."

Other highlights from the report include:

Though the Red List is among the world’s most important conservation efforts, only around 4% of known species have been assessed in its 50-year history. Mammals and birds have nearly complete coverage, but there is much work to be done for other groups. For instance, less than half of reptiles, 8% of mollusks, and 0.5% of insects have been evaluated. Plant, Freshwater, Marine, and Desert species are targeted for expansion in the coming years. As with all conservation efforts, the expansion of the Red List assessments is primarily limited by funding. If you are able, consider making a donation to the IUCN to support this work.