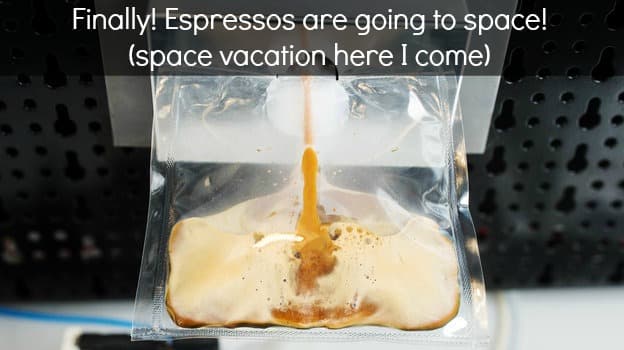 For most of us on Earth, our morning is incomplete without a cup of coffee.  As we get better at going to and living in space, the general public can rest assured with the knowledge that a cup of caffeinated goodness will be waiting for us when we wake up in our space hotels (hey, one can dream, right?).

The ISSpresso machine is designed to work similar to Keurig machines, but now it just needs to work in microgravity. This brings us to one of the coolest partnerships in the history of engineering, when engineers from the Italian aerospace firm Argotec and the coffee company Lavazza, along with the Italian space agency, came together in a perfect union to deliver fresh coffee to space. In the words of Maanvi Singh, "Just when did space get so hipster? First they start growing their own salad and vegetables up there, and now they've got fancy coffee — what's next, a microbrewery on Mars?"

Yes, that microbrewery needs to happen.

But, back to coffee. Here on Earth, gravity is used to help the brewing process. Water comes in from the top, falls through coffee grounds, and into a pot. When you're in low Earth orbit, microgravity takes the whole "falling" thing out of the equation and we start running into problems with keeping the hot water inside the coffee maker, and the hot coffee from going everywhere after it's brewed.

The brewing solution was rather simple. You keep the entire system closed, feed water through one end, pressurize it, heat it, send it through the coffee grounds, and into a collection pouch astronauts can drink from. Now, we have to deal with a number of problems.

First, sanitation is very important. The ISS crew isn't able to just wash everything out in a sink. The ISSpresso machine needs to be able to clean itself, otherwise coffee left in the machine could go bad and cause a health risk. Making an espresso is also a challenge in orbit, because you need to keep the water hot and pressurized throughout the brewing process. Boiling water in space can be a little dangerous because hot bubbles don't rise and dissipate like they do on Earth, instead, they stay mixed in the liquid and create not-so-yummy pockets of hot air.

In the end, engineers created an espresso machine that weights about 40 pounds. It hasn't made it's ISS debut yet, currently it's on Earth and both the machine and the Italian astronaut Samantha Cristoforetti will arrive at the ISS at the same time next year. The machine will only have 20 "single serve" coffee capsules, so the crew won't have a ton of coffee since the machine is still in an experimental phase (then again, I know you can squeeze another cup or so out of those Keurig packets).

One of the most horrible things about this espresso machine is, because the astronauts need to keep the hot liquid contained (read: in a closed system) and drink it from a pouch, they won't really be able to smell the coffee - which is personally one of my favorite things about my morning coffee routine. Rest assured, even though their oratory senses might lack that experience, ISSpresso is bound to be an improvement over the instant coffee they have now.