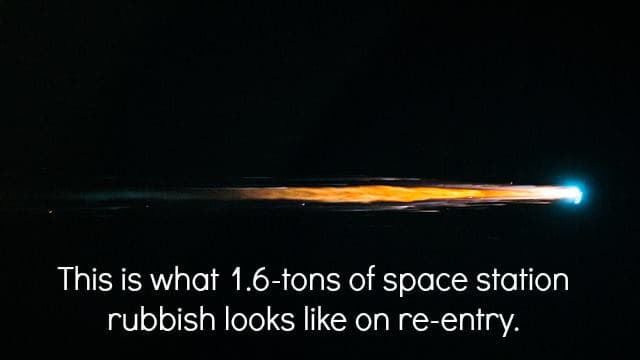 This is a picture of the Albert Einstein burning up on reentry (you have no idea how much I wanted to say that).

The Albert Einstein ATV is a waste disposal vehicle on board the ISS. The station's crew crammed it full of waste that can't be reused (because, the ISS is really good about recycling just about everything). Albert Einstein was filled with dirty clothes, human waste, and generally an assortment of things you'd rather not have dirtying up the ISS.

Albert Einstein was then directed to re-enter Earth's atmosphere and burn up in one of the coolest ways to "take out the trash" that humanity has come up with to date. The spacecraft disintegrated as planned with nothing to show for it other than a fantastic light show.

This image is the first image of the disintegration process since 2008 when the Jules Verne met a similar fate. So, the ISS is clean again and NASA managed to give planet Earth a light sprinkling of astronaut trash in the process. Therefore, the next time you wipe off dust from the counter or clean your car, you can add dirty space-laundry ash to the list of particles you've just removed.

You can see a looping video of the re-entry process as seen from the ISS here.

You can see an awesome video of Col. Chris Hadfield on "Conan" talking about this event here (trust me, it's worth watching).