Is Technological Evolution Infinite or Finite? 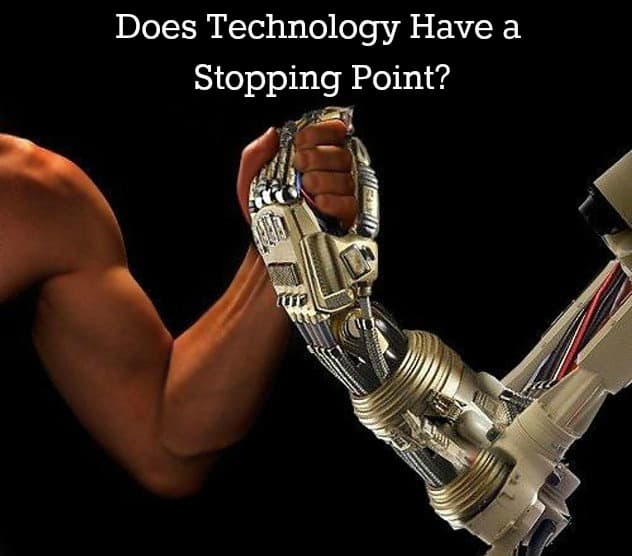 These days, it seems as if new life-changing technological developments are around every corner, which raises an interesting question: Will technology progress infinitely - assuming we manage to avoid extinction - or is the process finite?

Well, the first thing we would need too establish is what we consider to be 'new technology.' Would a Tamagotchi count as new technology, or as an invention? Is it an expansion upon computing, which would be the base-line technology?

Personally, I would see new technology as something innovative that supplies a potential function of enhancing or preserving life - whether through extending life (health care), defending life (weaponry) or providing new options for tasks/recreation, or even new activities altogether, that we cannot even contemplate currently. Now, this is where it is going to get massively philosophical.

"Moore's Law" states that there is a finite limit on the amount of transistors possible within our material universe, that can be included in technology. This matter is of great importance as our current computer systems are electronic, and the brains of the CPU, Northbridge, Southbridge, and GPU (at a minimum) are determined by these components. There is a physical limitation here - the circuitry is too small and too susceptible to heat-soak, micro-voltage surges and damage. This is an established limit on current computer technologies.

If we can overcome the conventional computer processor limitation of Moore's Law, then we can continue to advance electronically.

Meanwhile, there is a belief that we as a species are on the verge of a huge era of enlightenment and technological attainment. This is loosely referred to as a 'Technological Singularity' which involves a super-brain being realized or created (whether human, cyborg, full computer or extraterrestrial). This intelligence will allow vast leaps in ability to produce new and fresh ideas, further areas to learn, study and develop - far beyond what humans can contemplate, on scales far grander. The end result is that this intelligence will be so far removed from human brain function that it may well walk the path of 'Skynet' or the 'Matrix' in either committing genocide on humanity, or using us for another purpose. If we cannot understand it, we cannot hope to control it.

Until this intelligence is developed, we are basically simmering quite warm, but not quite at the peak of invention and innovation that is contemplated from a super intelligence. Once developed/realized, we cannot possibly estimate the breakthroughs and advancements that could initially be presented (else would we do them ourselves!).

With these considerations aside, humanity has an even more pressing series of problems standing firmly in our path:

Modern Society - That which we exist in currently, is also our biggest downfall. Want to learn how to do or use something, or to get the parts for a new invention? It will cost you. Money is a huge speed-bump to technological and species advancement. As we can consider with the Oil Industries, where it is rumored that the big corporations are deliberately withholding advancements in hydrogen fuel-cell technologies to make the most profit possible - we must remember that Money rules all in our current society.

Similarly, Politics plays its part too. Deceptively intertwined with Money (and power) hidden agendas and motives play key parts in supporting certain projects. The betterment of humankind is the last thing a selfish politician or businessman cares about and often they will attempt to forecast how an invention they support can be stolen from them, or used against them.

Human concerns - that of families, insecurities, illness, love, war, religion, grief all play a part in the success (or deterioration) of great minds. In the current employment climate in the Western world, morale is rock-bottom; people are unmotivated and ever worry about getting fired the next working day due to point 1 (Money). Human life appears to be deemed expendable now, whilst more attention is paid to Money and Assets, than to the value or damage to human life in every respect.

Laws of Physics - like Moore's Law, certain Physical principles control and dictate the world of invention and technological innovation. For instance, digital storage is a large issue (for those who work in IT can appreciate). Physical Magnetic Hard-Disk Drives take up space, generate heat, use power, are slow and noisy. They also involve moving parts and can fail and error randomly. Solid-state technology has come forward as a supplementary technology, but has limited read/write usages and is still prohibitively expensive for its finite lifespan. Could the unpredictable nature of Quantum Physics be the solution here? If it can be tamed and used effectively, that is...

Space - not quite the Universe, but physical space. Our planet is only a set size, and there will come a time when space is not available. Through overpopulation, sea-levels rising or other events (wars, geological activity etc). We must persevere with relocation and spreading throughout the Universe.

Resources - everything needs resources. Often, you won't get funding or support from the Government or Investors without a resource generation for them (e.g. Diamond Mining) for supporting your latest technology (e.g. Deep-crust Diamond Drill vehicles). We will run out of accessible resource which we will require for all manner of purposes - from fuel, to implements to technology and testing. When this happens, progress will grind to a halt. We must look elsewhere for these resources (asteroids, other planets, other systems... other galaxies?!).

Unfortunately, until the super-intelligence is created, we are limited by human consideration, human greed, human desire for power and human desire for control. All of these will hinder or suppress developments, resources and motivation and will block, to an extent, the technological innovations of the future.

I guess this is a good thing, that we will always be developing, but when we stop, we will have reached some pretty huge limitation which will require major changes to our lives and planet. Hopefully, by such a time, we are a united species with no desire for power or greed where everything is provided without being excessive. Best make that a VERY long time in the future I think!

So, to bring this huge area (which I've barely managed to touch-upon) back to your question - we will be limited to a finite region of understanding and technology until such a time as we can develop or interact with an intelligence which is so vast that it can produce and direct us in areas we could not contemplate currently. At which point, we cannot possibly say if there are any limits, as they are far beyond our comprehension as humans to even dare to contemplate.

in the mean time, here's something to consider: