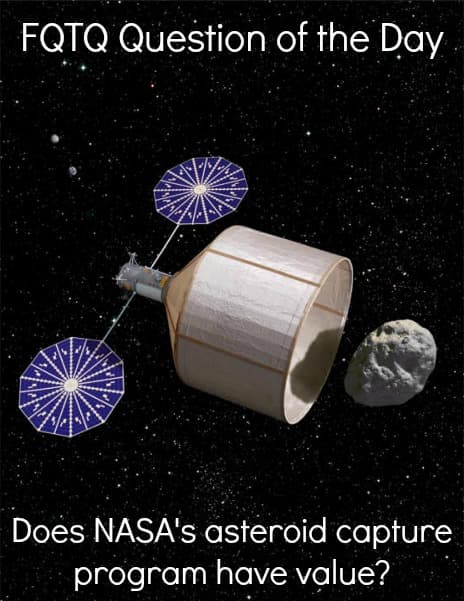 Earlier this year, NASA announced the Asteroid Redirect Mission (ARM) and, at first glance, it seems like it could be cool. Ever so basically, NASA plans to capture an asteroid, put it into lunar orbit, and even land men on these objects. What are we suppose to get out of this? In the end, the program is said to be a proving ground for technologies that'll help get humans to Mars; it's also to provide invaluable information about asteroids to scientists so we'll have a better understanding of the and thus better able to defend ourselves when one of these cosmic threats decides to smack us.

So, what's the problem? Pretty much everybody hates it, especially the retrieval aspect of the program. An example can be found when Richard Binzel, a professor at MIT and a world authority on asteroids, ferociously attacked the ARM program at NASA's 11th Small Bodies Assessment Group meeting. He renamed the program the Far Away Robotic sandCastle Experiment (FARCE) and generally a waste of time, money, resources, and Binzel believes this stunt could actually destroy NASA's Planetary Science Division.

Binzel has continued to argue against the ARM program, and says that (despite claims) there is no scientific merit to retrieving an asteroid and that it won't in any way help forward a mission to Mars. At the tune of "billions" of dollars, ARM is too expensive to justify the mission not actually doing anything. One of Binzel's most scathing remarks came when he said "It really is an exercise of giving astronauts something to do that sounds cool and sounds important, but the scientific merit is not compelling."

So, how was ARM born? As always, the project was born out of politics and money. In 2010, President Obama challenged NASA to send astronauts to an asteroid and to Mars. Then, NASA's budget was cut, long story short, ARM was born.

Charles Miller, the president of NextGen Space LLC and a former senior adviser for commercial space at NASA, is also very critical of the ARM program. He is (more or less) opposed to it completely. He thinks the best way to get to Mars is by returning to the moon. The technologies needed to land on Earth's natural satellite are *very* similar to those we'd need to land on Mars. More importantly, it's budget friendly. "I led a NASA study that leveraged commercial launch and demonstrated we could return humans to the moon within NASA's existing budget. It would be a completely different strategy, using existing launch vehicles such as the Atlas V and Delta 4, but we could get to the moon in the next decade." claimed Miller in an interview.

These aren't the only people who've come out against ARM. Most experts and organisations have stated that ARM should go and be replaced with something better. This includes organizations like the the National Research Council, who is part of the National Academy of Sciences.

So, what's the verdict? Will ARM continue to operate as planned, or will it be remade into a better asteroid mission? Perhaps, it'll be discontinued entirely. Only time will tell.