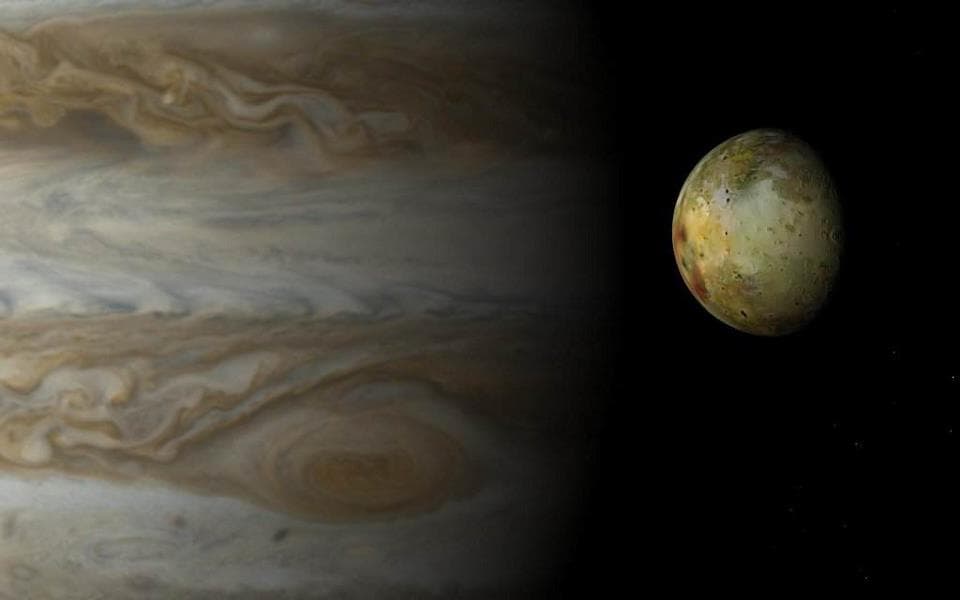 Io is probably one of the most well-known moons in the solar system. Orbiting 422,000 kilometers above Jupiter, Io is the innermost of the four Galilean moons. Io, along with the other three Galilean moons, was first seen by Galileo in 1610, making them the first moons ever discovered (aside from Earth's moon...which really wasn't that hard to "discover"). Io has an orbital period of 42.5 hours, which means the moon orbits with such speed that amateur astronomers can actually observe its motions in a single night.

Io itself is the thirteenth largest object in the solar system and the fourth largest moon in both mass and diameter. It’s only slightly larger (in both categories) than Earth’s own moon. Io is named after the a Greek priestess of Hera, Io (obviously), who eventually became a lover of Zeus – the Greek equivalent of Jupiter.

Io (the moon, not the priestess) is home to over 400 active volcanoes, making it the most geologically active body in the solar system. On Earth, geological activity is primarily the result of plate tectonics – in contrast, Io’s geological activity is a result of tidal heating caused by the gravitational pull of Jupiter and the other three Galilean moons. Tidal Heating “occurs through the tidal friction processes: orbital and rotational energy are dissipated as heat in the crust of the moons and planets involved.” All of this geological activity leads to another interesting feature for Io… an atmosphere.

Io is one of only three moons in our solar system with a substantial atmosphere (other moons, such as Rhea, Titania, and even our own moon have extremely thin, hardly noticeable atmospheres). Io’s atmosphere is primarily composed of sulfur dioxide and is about 100,000 times thinner than Earth's (so I wouldn’t suggest breathing it for several reasons). Even though it's so thin, the atmosphere is substantial enough for Io to experience weather and seasons, and it even has clouds.

Io is one of the most interesting moons in the solar system, from both a professional and amateur perspective.