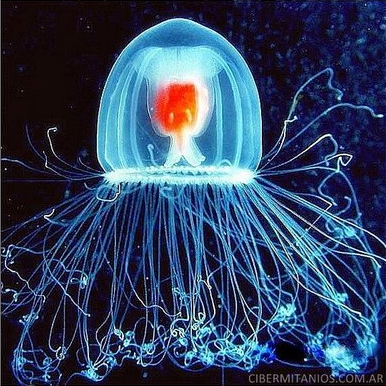 Unfortunately (or fortunately, depending on your literary preferences), I'm not talking sparkly vampires. The immortals I'm referring to are a species of jelly fish called Turritopsis nutricula. These fascinating little guys have the ability to revert back to their polyp (jouvenile) state after reaching sexual maturity. The process is called transdifferentiation, in which a non-stem cell morphs into another type of cell and, in this case, rejuvenates itself. This process can be repeated indefinitely therefore making the Turritopsis biologically immortal. It's likely that we could learn from this jelly fish, it would be interesting to see what we could achieve and the doors it could open with self repairing cells on our side.

The tiny everlasting jelly fish measures in at a whole 5mm in diameter, the young (1mm) Turritopsis have 8 tentacles and the older (medusa) forms have 80-90 tentacles. They originate in the Caribbean, however they are now seen scattered around the world. Dr. Maria Pia Miglietta from the Smithsonian Tropical Marine Institute said "We are looking at a worldwide silent invasion." Imagine that.. revenge of the immortal jelly fish!

Although the mini coffin dodgers are biologically immortal, they are still prone to predators and disease. So, this invasion doesn't impose a threat to us as in coming inland and holding us hostage... we could just squish them, or keep them as pets "I shall call him Squishy and he shall be mine and he shall be my Squishy!".