Hyperloop Travel: Could Vacuum Tube Travel Be a Reality? 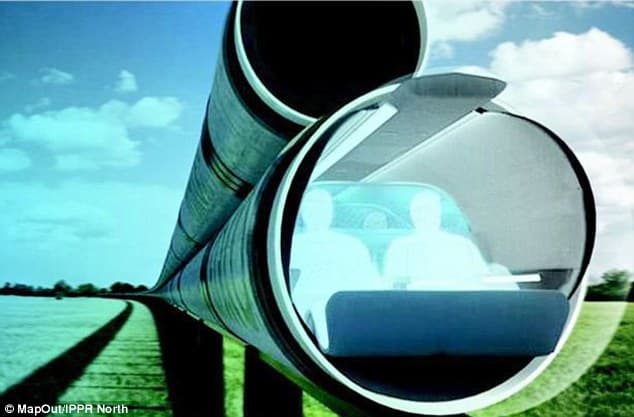 Science fiction is replete with a number of different ways to travel. There are spaceships and transporters, man-made worm holes that make intergalactic travel a reality...the list goes on and on. However, one of the most interesting (and perhaps more realistic) is a vacuum tube transport. If you don't know what I am talking about, think about the tubes that are used by cashiers at banks. You pop a check in a small container, press a button, and air whisks the container off to the teller. At one point, people thought that this technology might be used for every aspect of life. Kind of like in the Jetsons TV show.

On this show, pneumatic tubes were used to transport, well, pretty much everything. Stepping into the tube instantly whisked you away to another building or city. Notably, you could move up and down or side to side.

And in 1905, as T. Baron  Russell noted in A Hundred Years Hence: The Expectations of an Optimist, many people felt that this might be the most likely way that individuals transported objects and materials in the future:

"And however rapidly and however frequently the trains or airships of the period may travel, the process of making up van loads of mail matter for despatch to remote centres, and redistribution there, is far too clumsy for what commerce will demand a hundred years hence. No doubt the soil of every civilised country will be permeated by vast networks of pneumatic tubes: and all letters and parcels will be thus distributed at a speed hardly credible to-day.”

Unfortunately, we don't have any transport like this, but could we some day? The Tesla co-founder, Elon Musk, thinks so.  A couple of years ago he announced he thought he could build a tunnel that would whisk people across the country in minutes. He states the benefits of this technology: "This system I have in mind, how would you like something that can never crash, is immune to weather, it goes 3 or 4 times faster than the bullet train...It goes an average speed of twice what an aircraft would do...I think we could actually make it self-powering if you put solar panels on it, you generate more power than you would consume in the system. There’s a way to store the power so it would run 24/7 without using batteries."

According to Musk's calculations, a journey between Manchester and New York City could take just four hours, if a maximum speed was achieved. This would be made possible through a train that travels inside a vacuum tube, so we wouldn't exactly be floating along like in the Jetsons, but the concept is pretty much the same. And recent reports reveal that Muskis not the only one who thinks that this might be a real possibility.

In Musk's design, Hyperloop pods would be mounted on top of thin skis that are made out of inconel,  which is an alloy already used by his SpaceX firm. Air is then pumped into the skis via small holes to make an air cushion, allowing the pods to travel without any friction. An electric turbo compressor would be responsible for compressing air from the nose and routing it to the skis. Of course, getting started might be a bit of an issue. Here's where magnets come in. They would be placed on the skis, and an electromagnetic pulse would be used to give the pod its initial thrust. There would also be "reboosting motors" along the route. These would keep the pod moving at just below the speed of sound (which is 761 mph/1,225 kmh) so there wouldn't be any sonic booms. This design would cost some 6 billion dollars. But if it could connect New York and LA, the boost to the economy may make it worth it.

Now, a concept for the ‘Concorde of the tunneling world’ has been revealed.

This idea was proposed in a competition that seeks to find innovative ways to increase business between Manchester and New York (which is about 500 miles longer than the plans for Musk's rail). The proposal asserts that that technological advantages of this kind of system could end up making it a reality. The train would levitate in mid-air by use of electric magnets, and the train would be contained within a tube underneath the Atlantic Ocean, with a service running in a perfect vacuum. The idea was unveiled by Simon Horton, who submitted the idea with several colleagues.

The English design adds a bit to Musk's design by adding a propeller to the front of the train to force any remaining air resistance back. The transport system would also have other benefits, such as a reduced reliance on fossil fuels.

But of course, it comes with many problems. As Marco Villa, former President of the American Society of Civil Engineers, notes, "Is it easy? Absolutely not. It’s challenging in a very large way, because it’s a project that involves every single discipline in engineering, every single discipline in finance, and every single discipline in politics." There is, for example, all the run around that would be required to get permits to implement the technology, and there would also need to be increased security measures, which some say has not, as of yet, been factored into the design.

Moreover, compressing air and expelling it can produce heat, this would need to be addressed. Sam Jaffe, a senior research analyst at Navigant Research, noted that the necessary coolant systems would dramatically impact the efficiency of these designs. "The biggest concern with this plan has to do with temperature. The pod will be compressing air and expelling it downwards and backwards. All that air compression creates an enormous amount of heat, which can damage the pod and its machinery. Musk’s solution is to add to each pod a water tank that will capture that heat and turn it into steam to be collected at the next station. Although the thermodynamic calculations are correct, a small pod with only a few cubic feet of room for a heat exchanger leaves little space for an efficient exchange of heat. That means that the flow of water must be increased, requiring a lot more water on board. There may be an elegant solution for this challenge, but it’s not in Musk’s current paper."

So while the design is technically feasible, there are some notable hurdles. What do you think, will this technology ever be a reality? Is it the future of transport?