Can We Create Artificial Daylight at Night? 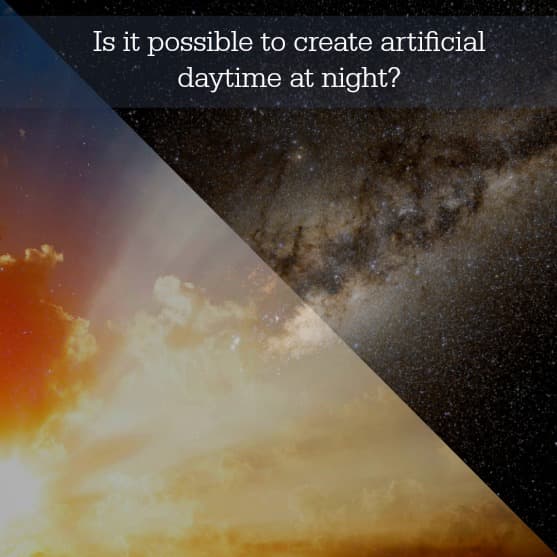 What would it take for us to make daylight at night on the Earth? What would we need to eliminate "night" altogether?

In reality, this is a bit of a silly question. If we actually did this, not only would it require massive amounts of energy, it would seriously interfere with the lives of an untold number of species. Nevertheless, it is interesting to think about. So, what would it actually take?

THE BENEFITS OF NO NIGHTTIME:

First, there would be some benefits to 24 hour daylight. For one, it would be safer to drive...okay, so there is only ONE benefit. On the negative, it could kill off plants worldwide, as most plants eventually need darkness for their long-term health. I can also imagine many animals not being too happy about having 24 hour daylight. It could interfere with the hunting habits of many nocturnal animals. Of course, the intensity of the light also has to be considered. 24 hour light with the strength of the summer sun would fry everything. However, at a lower intensity, such as during the winter, plants would not be affected quite so much.

So now that we've established that this is, in essence, a terrible idea…let’s continue anyway, for the sake of science!

HOW WE CAN SIMULATE DAYLIGHT:

After a short deliberation I decided that putting a large convex mirror on the other side of the Earth wouldn't work. For starters, the Earth itself blocks out a vast majority of the light that would need to be falling onto the mirrors.

A new idea was needed, and I stumbled across the perfect answer: 60W Daylight Bulbs!

So now that we know the item that we're going to use to simulate the daylight, where are we going to put them? How many of them do we need?

For the sake of calculations, and to make it look as neat as possible, we're going to make the Sun disappear, at least for the most part. To do this we are going to cover the entire sky with light bulbs, 360° around the Earth. To get away from most of the Earth’s atmosphere we're going to place all of these light bulbs 500 km from the Earth’s surface, that puts us above the International Space Station and a number of other satellites, all the others are just going to have to suffer.

The average radius of that Earth is 6,371 km, so it is by no means small. If we're going to be putting our lights 500 km (just over 300 miles) above the Earth’s surface then they're going to be orbiting at a distance of 6,871 km or 6,871,000 m (4,270 miles). The next thing we need to do is calculate the surface area of space at this distance. Below is a little mathematics which you’re all more than welcome to skip over!

Now we resume normal text (or at least as normal as you can expect from an article such as this).
For those who didn't follow the nasty mathematics, what we did above is start to get ready to work out how many light bulbs we are going to need for our little experiment. Essentially, we worked out the surface area we need to cover at a distance of 500 km from the Earth’s surface.

HOW MANY LIGHT-BULBS WE NEED:

The next thing we need to know is how many light bulbs we need per square meter to simulate day light brightness. Now we have already established that the energy from the Sun on the Earth is 1366 W/m^2, as we're using 60W bulbs... Beware further mathematics!
1366/60= 22.76 bulbs per square meter

Thankfully we don't need to worry about having exact numbers of light bulbs. To work out how many light bulbs we actually need, here is the last bit of mathematics that you will have to endure:

Now, at the end of this you may be thinking:

DOES THIS EXERCISE HAVE A POINT?

Well I did this to demonstrate that it doesn't take a professor at a University to work out some of those weird and wonderful statistics that we have come to love and enjoy. It's these types of questions that are really good for high school physics the mathematics students because it's not a straight forward question and does require a little thinking, but it is also certainly within the scope of their abilities and it’s rather interesting.

Lastly, all of these light bulbs won't just be floating around aimlessly in space, they will have to be connected to a supporting framework and they’ll need to be somewhat evenly spaced out. Could you just imagine the service costs of an installation such as this?