How to Weigh a Virus 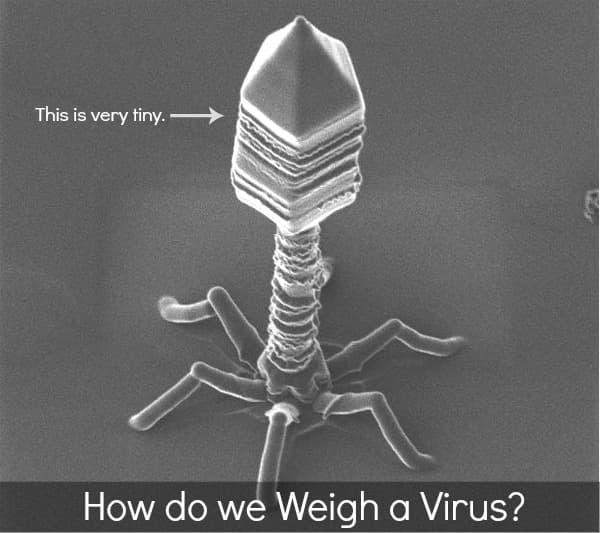 Did you ever wonder: "What's the lightest thing that we can accurately weigh?" The answer: it depends on what you want to weigh. In principle, we can accurately record the weight of as little as a zeptogram, 10-21 grams. Yet it's important to remember that this has to be done in a vacuum, which itself poses quite a few problems.

In attempt to reconcile some of these issues a team at MIT in 2007 developed a scale to measure extremely small masses -- accurate enough to weigh individual cells. In zeptograms, single cells are in the millions, so the researchers had to start with femtograms; a 10-15 gram resolution. More recently there have been some improvements. Following through on the same design, it is now possible to weigh living viruses down to 0.85 attograms, 0.85 x 10-18 grams; that levels out to less than a millionth of a trillionth of a gram!

First, a disclaimer: despite this article's references to weight, we are actually talking about mass. We tend to use the two words interchangeably but they are not the same. Mass is a constant; a kilo on Earth weighs, of course, a kilo. However the scale is actually measuring the force: mass multiplied by the gravitational field strength of the Earth, in this case 9.8 Newtons. A kilo will be weightless in outer space and an awful lot heavier on Jupiter, yet it is still the same mass. If a brick is thrown horizontally at you, the resulting force of the impact is due to inertia, the mass of the brick multiplied by the acceleration (deceleration as our intuition sees it). This force is the same anywhere; as long as gravity can be ignored in the equation, weight is of no concern.

The researchers that have made the device to weigh cells actually borrowed the idea from the older system that, despite its incredible resolution, is completely unfit for living things. It all revolves around resonance. To get the idea, imagine a guitar string: if the string is plucked, it will vibrate at a certain frequency; a certain note. This is the resonant frequency the string will naturally vibrate at if nothing interferes. Next, imagine that a small mass is attached to the string but nothing else changes. Due to  higher inertia, the resonant frequency of the string has changed, it will now play a slightly different note. This change in frequency is directly related to the extra mass, so anyone who knows the specifics of the string can calculate it.

The systems developed at MIT use a small silicon cantilever instead of a string; something that looks a little like a diving board, only much smaller (see image). The authors of the 2007 study used a 'board' just 50 microns long - this yielded an already-impressive resolution of 77 attograms. The latest research in the field has more than halved this length to 22.5 microns, yielding a 30-fold increase in sensitivity.

To explain, let’s get back to the guitar analogy. If the mass on the string was say, a caterpillar, you might find there is a measurable difference in frequency as the creature is relatively heavy. If a flea had landed on it instead, and the string is plucked, it will just hang on for dear life with nobody the wiser. It is simply too light, in comparison to the string, to make a big enough difference. So, if we were to measure the mass of a flea in this way, we need a smaller guitar, with lighter strings that vibrate at higher frequencies. For reference, the average flea weighs about 0.1 grams,  or 100 million-billion attograms.

In the original system, working in a vacuum, a sample is ‘simply’ placed on the end of the cantilever and weighed. The vacuum is important as at this scale, air density would affect the reading. What the clever folks at MIT did was to take a similar cantilever but construct a micron wide, hairpin-shaped channel inside it. The small particles are then simply suspended in liquid and pumped through the micro pipeline where they will be weighed as they go around the bend at the tip of the cantilever - they call this a Suspended Nanochannel Resonator (SNR).

The cantilever still vibrates in vacuum but the fragile samples will not be exposed to it. As the channel is enclosed within the cantilever, the samples are safe, under normal, atmospheric pressure. Hence, cell membranes will not rupture due to internal pressure and liquids will not boil away in the vacuum. This approach also has the added bonus that it can measure samples pretty fast; 4 to 5 per second. Where a sample previously had to be placed on the tip of the cantilever, it now just rides the flow to the end and back again.

What are the uses?

The 2007 study was specifically aimed at living cells. A better understanding of what happens when cells divide could be very beneficial, for example in cancer research. A single cell could be isolated and monitored over extended periods of time as it metabolises and divides. Another use is a cell counter, something that can help in the diagnosis and monitoring of HIV patients by counting the amount of certain immune cells. There are other devices that can do this but these are far larger and more expensive. The technique described above allows the devices to be produced in a similar way to microchips, at a cost which could eventually make it disposable technology.

There is, of course, more to study than living things. Many technologies use small particles as key components - pigments in paint and particles of medication for instance. Knowing the size and weight distribution of these could be very useful.

With the latest incarnation of SNR this can be taken to the next level. Instead of studying immune cells in someone with HIV, we could actually 'weigh' the person's viral load. Conceivably it could also help in studying parts of cells: nuclei, mitochondria, or even the amount of neurotransmitter in neurons.

Again, man-made particles are also up for scrutiny. As more and more technology goes down to the nanometer scale it will be increasingly useful to have data on smaller and smaller things. The researchers demonstrated the abilities of their device by determining how many nanosized, gold spheres would attach to strands of DNA. With nanotechnology research moving ever-forward, the ability to measure weight on such a small scale could have many more potential benefits than we can currently think of.