How Small are You? 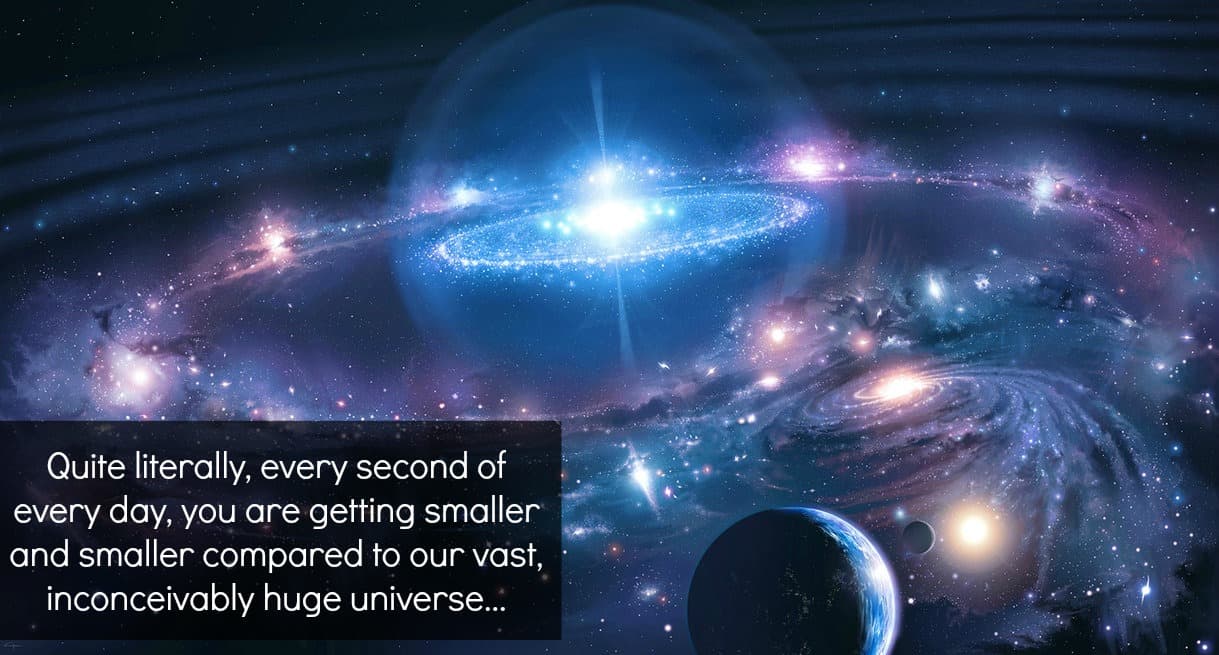 I once overheard a conversation of an acquaintance who was asking, "If the universe is so much bigger than humans, then what are ants to people?"  At this point in my adolescence, I did not have an answer to this question.  Now I know that the answer to this question is fairly simple, especially if you have a basic grasp of relative size and scientific notation.

It seems like a silly question, but it has its merits, and a lot can be learned from it.  To understand the relation of an ant to us, we should first look at the relative size of a human to the universe.

A very tall person would be around two meters tall.  This number is hardly worth writing in scientific notation (0.2 x 10^1m).  If you lived thousands of years ago, you may have thought that the Earth was all that there was (the sky being something else entirely).  The universe to you (back then) would have been the surface of a sphere roughly 12.7 million (12.7 x 10^6) meters in diameter.  It is easy, even today, to awe at the size of the earth.

But if you lived in the 1800's the universe would have been the Milky Way galaxy, a mere 100,000 light-years across (not taking into account dark matter).  It was only in the last century that we discovered that the universe was not made up of just one galaxy, but many.  The observable universe today is about 96 billion light-years across (one light-year is equal to about 9.5 x 10^15 meters).  You may recall the universe is 13.7 billion years old; however, we can see galaxies farther away than 13.7 billion light-years because of the universe's expansion rate.  Now, keep in mind that this is the measurement of the observable universe: as far as we can see.  Speaking of expansion, that means the universe will get bigger over time.  In fact, many models predict a universe with indefinite accelerated expansion. That means that every second you are getting smaller and smaller compared to our vast, inconceivably huge universe.

So what does this mean for our little ant friend?  From the perspective of an uneducated ant, with no idea of how vast our universe is (as far as we know), a human may seem like a colossal beast beyond comprehension.  A small ant is about 10^-3, or 1/1000 of a meter across (about 1mm).  This is about .05% as tall as our two meter human.  From the right reference frame this is a massive difference, but if your reference frame is the universe, this difference is all but nil.  You and your ant friend are roughly the same size.

Now remember, this is in comparison to the observable universe, which already shrinks your difference down to a very small amount.  But don't let your brain rest quite yet; there is even more.  Cosmic inflation theory suggests that the universe beyond the observable universe may be 3 x 10^23 (300,000,000,000,000,000,000,000) times larger.  This is just one suggestion.  It is still a possibility that the universe is indeed, infinite.  Such a staggeringly massive universe has no way of being put into perspective.  If your reference frame is an infinite universe, then you, your ant friend, your planet, your galaxy and everything with a finite measure are all (comparatively) the same size.  You and the ant--both infinitely small.  But there could be more.

We just may live in a cosmos of multiverses, meaning our universe is not the only one.  How many universes exist is completely unknown.  There could be none beyond ours, or there could be an infinite amount of universes.  An infinity within eternity, and you and the ant have been put into proportion.  Of course we don't know if the universe is infinite or, for certain, if other universes actually exist.  But cosmology and astronomy are quickly advancing fields that may soon provide us with the answer to both of those questions.

HOW SMALL DO YOU FEEL NOW?

As for whether or not this should make you feel small, that is up to the observer.  But consider that this means you are a piece of a cosmos that is more massive than you could imagine.  You don't just live in the universe.  You are a part of the universe, which means you could just be a piece of infinity.