How Quantum Batteries Could Become a Technological Sensation: 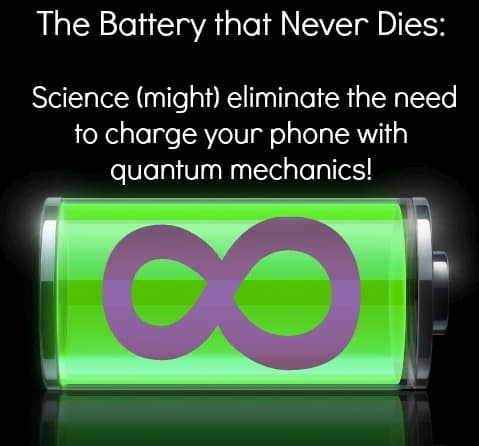 Quantum is the buzzword in today’s electronics market. As scientists decipher the secrets of the universe’s building block as well as uncover the laws that govern them, we’ve been able to predict and create some stunning pieces of equipment. Today, we look at batteries that never die.

That’s right, the idea of needing to charge your battery may be a thing of the past. To clarify, this isn’t endless or free energy, so thermodynamics is still a pesky annoyance.

At the moment, all (or, the vast majority) of all mechanical equipment uses classical mechanics; from the battery you use to power your cell phone to the engine you use to drive your car classical mechanics rules the day. In the grand scheme of nature’s laws, those found in classical mechanics are horribly inefficient. These systems work well below the thermodynamic limit, meaning that they usually take far more energy to run than they can produce. Quantum mechanics offers us a way to greatly increase the efficiency of these machines… nature’s cheat codes if you will.

The question here is ‘how much work can be extracted from a quantum system’. We’ve known for ages that it’s possible to harvest energy from a selection of quantum states but not all of them. Since the laws that govern anything smaller than my finger get really strange, you can expect that quantum mechanics also has some weird ideas here.

(Very) loosely similar to potential and kinetic energy in classical devises, all of the potential energy in passive quantum states is extractable – meaning you can use that energy to power systems elsewhere. This is where quantum entanglement comes in.

Einstein put it best when he described this peculiar property of quantum mechanics as “spooky action at a distance.” Here, two or more particles are entangled which means they share the same wave form. The more technical definition is:

“Quantum entanglement occurs when particles such as photons, electrons, molecules as large as buckyballs, and even small diamonds interact physically and then become separated; the type of interaction is such that each resulting member of a pair is properly described by the same quantum mechanical description (state), which is indefinite in terms of important factors such as position, momentum, spin, polarization, etc.”

As always, there is a catch. Their calculations and experimentation doesn’t account for practical limitations of this functionality. It might work perfectly well on a chalkboard in the lab but soon develop some issues in practicality in your pocket. Either way, this is certainly worth investigating.