How Much is a Supernova Worth? 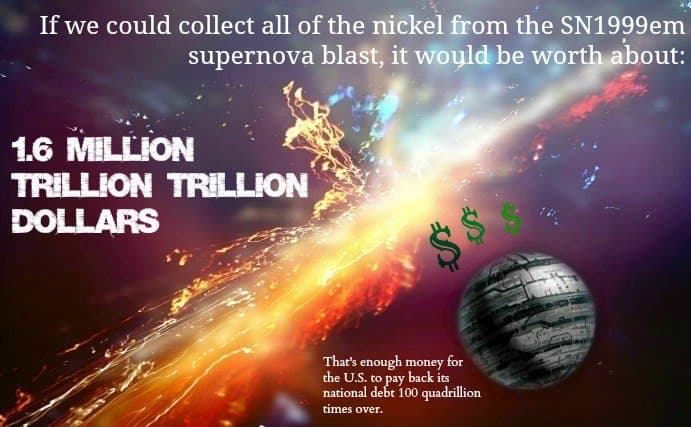 Previously, we mentioned that most precious metals are born in the belly of stars, and they are subsequently sent careening out from the hot center of these beats, seeding the interstellar medium, when the stars experience a supernova explosion. During these explosions, the stars release large amounts of oxygen, carbon, gold, silver, silicon, and nickel. So naturally, the next question that comes to mind (for me, anyway) is, "How much is the metal created in a supernova actually worth?"

Typically, the answer depends on the mass and the chemical composition of the star in question. So to make things easier, let's just focus on one single supernova in a galaxy far, far away—NGC 1637. Back in 1999, astronomers witnessed an exploding star, dubbed SN1999em, that became so bright it could be seen even with a moderate telescope. Because of this, it became one of the most studied supernova remnants in history.

An actual nickel in circulation in the U.S. weighs about five grams, with only 1/4th of that mass being actual nickel (3/4th of that mass is copper). Assuming we had a never-ending supply of copper to generate nickels from what was expelled by the supernova, we would only need a mere 1.2 grams of nickel per actual nickel. With this, we could ultimately create 3.2 x 10^31 nickels. Moreover, we could build a Jupiter-sized planet made of pure nickel, worth about $1.6 x 10^30, or 1.6 million trillion trillion dollars.

That’s enough coin to pay back all of the debt that the U.S. has acquired one hundred quadrillion times over, with enough money to buy yourself some prime real estate on the moon! Furthermore, if we placed all of those nickels we made from the supernova remnant next to one another, they would stretch across the universe dozens of times.

Of course, the abundance of nickle would actually bring down the value of nickel. So sadly, the nickle wouldn't really be worth all that much in the end. Also, as previously mentioned, all that nickle would be the size of Jupiter, so we wouldn't be able to fit it on our planet. And it is 25 million light-years away, so it would literally take us billions of years to get there and cost us an astronomical amount of money (likely driving the entire planet into bankruptcy before we ever got there). And the nickle was dispersed in the supernova blast, meaning that it is spread out across the cosmos...making gathering it a little difficult. But what's the fun of science if you are a Negative Nancy all the time?