This discovery teaches us something about new bees — and maybe also AI. 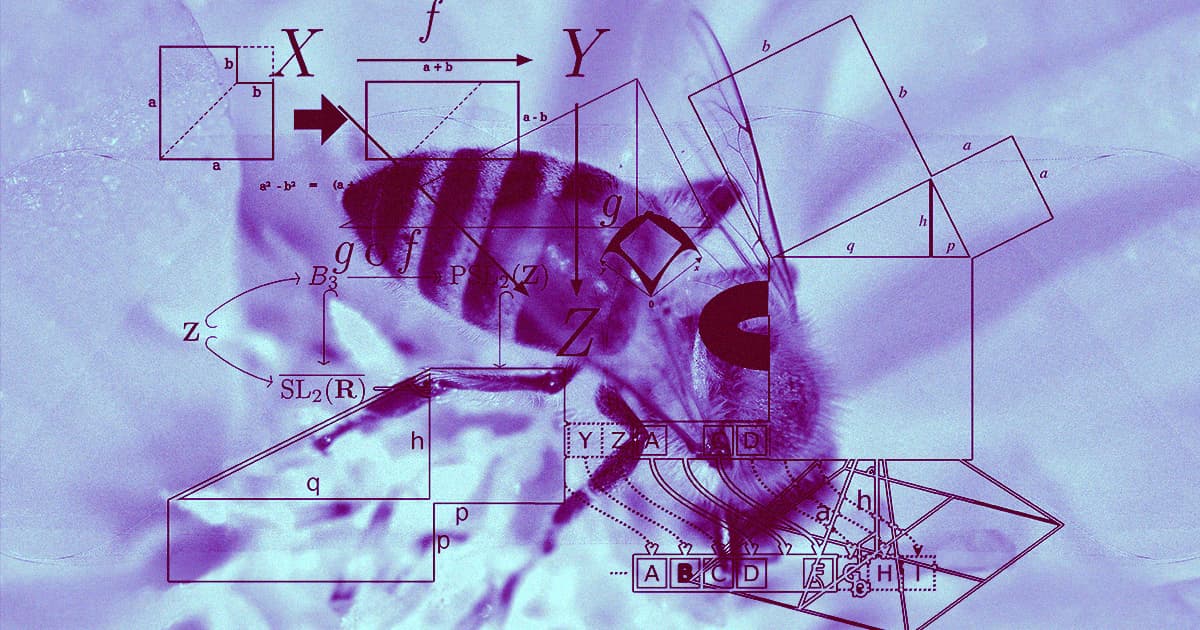 It turns out that tiny brains are more capable than previously thought.

We already knew various primates, birds, and other animals could solve basic math problems. Now, a team of Australian and French researchers has discovered that honeybees can also speak the universal language of mathematics on a rudimentary level — and the discovery could impact the future of artificial intelligence.

The researchers detail how they taught honeybees math in a paper published on Wednesday in the journal Science Advances.

First, they trained 14 honeybees to enter a Y-shaped maze through one arm of the Y. At the entrance, the bee would see a gray square displaying between 1 and 5 shapes, all either blue or yellow. If the shapes were blue, the bee was supposed to add one to the number of shapes; if yellow, it was supposed to subtract one.

Once the bee was in the maze, each exit corresponded to a potential answer. If the bee chose the correct exit, it got to eat tasty sugar water; the wrong exit led to a bitter-tasting solution.

At first, the bees would choose arms randomly, but according to the researchers, the insects learned over the course of more than 100 trials that blue meant adding one and yellow meant subtracting one.

According to researcher Adrian Dyer, the fact they they could teach honeybees rudimentary arithmetic doesn't just reveal something new about the animal kingdom. It also demonstrates that it's possible to pack complex problem-solving capabilities into a small package — and that knowledge could prove useful as we develop future AIs.

“You need to be able to hold the rules around adding and subtracting in your long-term memory, while mentally manipulating a set of given numbers in your short-term memory," he said in a news release. "On top of this, our bees also used their short-term memories to solve arithmetic problems, as they learned to recognise plus or minus as abstract concepts rather than being given visual aids."

"Our findings suggest that advanced numerical cognition may be found much more widely in nature among non-human animals than previously suspected," Dyer continued. "If maths doesn’t require a massive brain, there might also be new ways for us to incorporate interactions of both long-term rules and working memory into designs to improve rapid AI learning of new problems."

More on bees: Robo-Bees Can Infiltrate and Influence Insect Societies to Stop Them From Going Extinct

Read This Next
Brands We Love
Build A Career Backbone With This $16 Discrete Mathematics Course
Brands We Love
Learn Math the Way Engineers Do with this 9-Course Training Bundle
Futurism
Neuroscientists Have Followed a Thought as it Moves Through the Brain
Futurism
New Antimatter Study Lends Strength to Fundamental Theory
Futurism
"Living Circuits" Can Assist With Complex Computing
More on Hard Science
Tractor Beam
Thursday on the byte
Scientists Build Working Tractor Beam, Although It's Comically Tiny
Having a Blast
Jan 18 on the byte
New Study Shows Where You Should Hide to Survive a Nuclear Attack
Offworld Amino
Jan 15 on the byte
Scientists Find Building Blocks of Life in Meteor That Smashed Into Family's Driveway
READ MORE STORIES ABOUT / Hard Science
Keep up.
Subscribe to our daily newsletter to keep in touch with the subjects shaping our future.
+Social+Newsletter
TopicsAbout UsContact Us
Copyright ©, Camden Media Inc All Rights Reserved. See our User Agreement, Privacy Policy and Data Use Policy. The material on this site may not be reproduced, distributed, transmitted, cached or otherwise used, except with prior written permission of Futurism. Articles may contain affiliate links which enable us to share in the revenue of any purchases made.
Fonts by Typekit and Monotype.