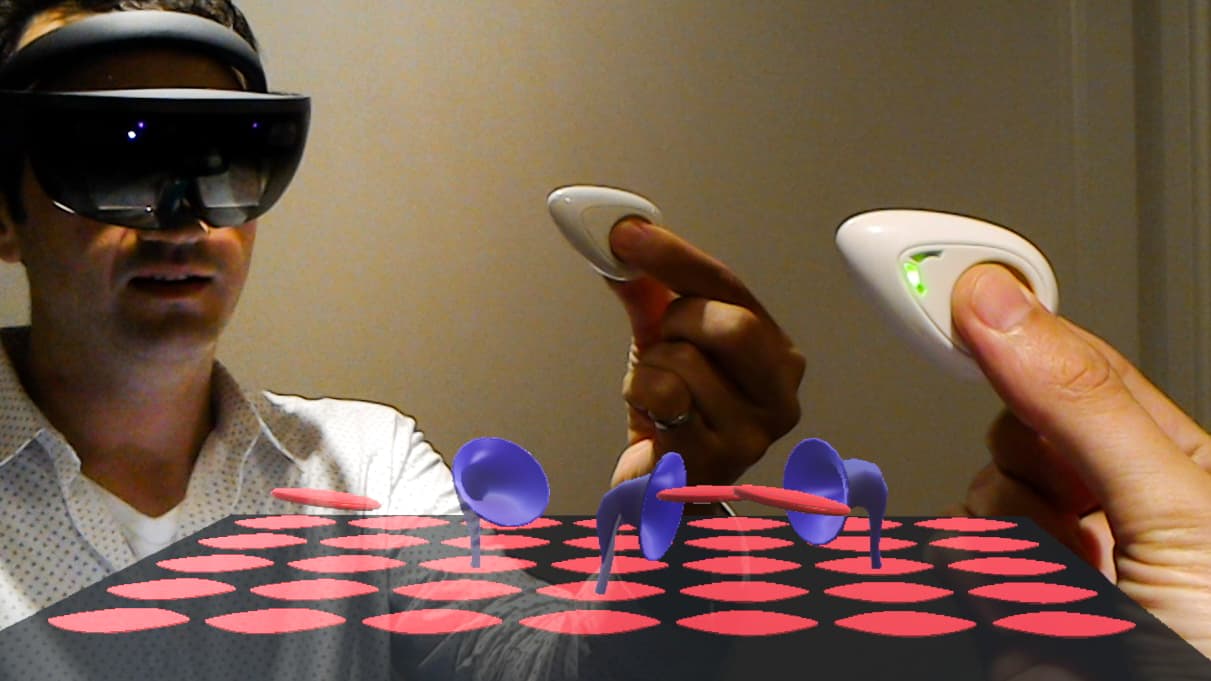 The sixth episode of Star Trek: The Next Generation's fifth season introduced an augmented reality (AR) game that nearly took over the entire Enterprise crew. It was a deceptively simple game that used a person's emotional state to enter red disks into blue funnels. In the TNG episode (aptly titled "The Game), when a player successfully gets a disk into a tunnel, they're rewarded with a pleasurable signal, increasing the game's addictiveness.

Anyone interested in trying the game for themselves can now do so, as it has been almost perfectly recreated using Microsoft's Hololens AR headset and a biometric sensor. The only difference is that it doesn't reward players by sending a pleasing signal to the brain, save for the satisfaction you may feel after managing to get a disk into one of the funnels.

Massachusetts Institute of Technology (MIT) graduate Robert Burke brought the TNG game to life last year, noting on his website that "Star Trek has a history of envisioning technologies that eventually become real. Often faster and more addictive than anyone expects!"

Burke used Hololens because it provides the same AR field of view demonstrated on Star Trek, but since it has no biometric scanning capabilities, he also used the Pip biosensor from Galvanic. The Pip is a handheld device that can measure one's fluctuating stress levels through their fingertips. Pip "accurately captures these changes and through biofeedback, allows you to visualize them."

When used in the game, stress is shown by the aforementioned red disk entering — or being rejected by — the blue funnels. The Pip isn't required to play the game, though, as you can also use voice commands to move the disks to the funnels.

Burke's game isn't the first time we've seen science fiction become reality. Artificial intelligence (AI) was once thought to only be a sci-fi concept, but now we have Siri, Alexa, and Google Assistant. Smartphones are another sign of sci-fi made real and are essentially a real-world counterpart to Star Trek's Tricorder (though, it could be argued that our smartphones are much more stylish and feature-rich).

Read This Next
Photo Wake-Up
This Algorithm Can Create 3D Animations From A Single Still Image
Brands We Love
You Could Be Using VR to Boost Your Hidden Creativity
Futurism
Augmented Reality Recreates A New York City Not Seen for Centuries
Futurism
Virtual Reality Has Reached A "Tipping Point." It's Officially Here to Stay.
Futurism
Google Is Bringing Augmented Reality Functionality to Chrome
More on Virtuality
Biggest Loser
Feb 2 on the byte
Facebook's Metaverse Division Lost Nearly $14 Billion Dollars Last Year
Meta Marked
Jan 25 on the byte
The Metaverse Industry Is Already Going Belly-Up, for Reasons We Can't Imagine
Try Again
Jan 13 on the byte
Congress Rejects Funding the Military's Microsoft AR Goggles Because They Made Soldiers Sick
READ MORE STORIES ABOUT / Virtuality
Keep up.
Subscribe to our daily newsletter to keep in touch with the subjects shaping our future.
+Social+Newsletter
TopicsAbout UsContact Us
Copyright ©, Camden Media Inc All Rights Reserved. See our User Agreement, Privacy Policy and Data Use Policy. The material on this site may not be reproduced, distributed, transmitted, cached or otherwise used, except with prior written permission of Futurism. Articles may contain affiliate links which enable us to share in the revenue of any purchases made.
Fonts by Typekit and Monotype.