These unique gifts are sure to be a big hit for the holidays. 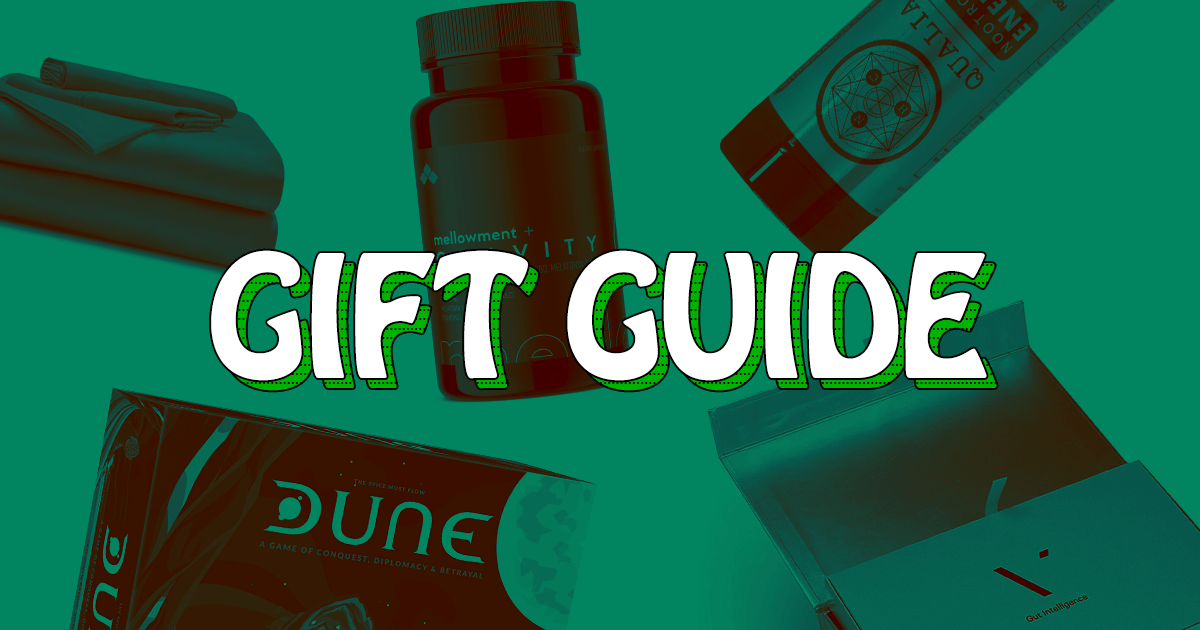 It’s that time of year, again. Christmas is right around the corner. Hanukkah, too. Basically, if you celebrate a winter holiday that involves giving gifts to friends and loved ones, it’s time to start shopping. And if you’re looking for some cool gift ideas for science and tech lovers – or just a really unique product for someone special – you’ve come to the right place. Here at Futurism, we’ve put together a Holiday Gift Guide featuring some of our absolute favorite high-tech products and services of 2019.

Whether you’re shopping for a mom who likes nothing, a friend who has everything, or a coworker you barely know, our gift guide has something for just about everybody. So start here, and make that special someone’s holiday extra merry and bright.

If someone on your gift list is big into tech, chances are they're familiar with blockchain, the underlying technology that powers the decentralized Bitcoin network. Cryptocurrency aside, the disruptive new tech has the potential to dramatically alter many aspects of our society. And in Trust Machine: The Story Of Blockchain – which is narrated by Rosario Dawson – award-winning documentarian Alex Winter explores how the tech works and where it is likely to have the greatest impact.

Trust Machine: The Story Of Blockchain is available on Amazon Prime Video, so click here to rent or buy it now.

The Gut Intelligence Test by Viome

Do you have a friend or loved one who read about gut health on some natural health blog and is now obsessed with kombucha? If so, why not help them take the guesswork out of gut health this holiday season with the Gut Intelligence Test from Viome. The Gut Intelligence test is an easy-to-use at-home test that uses advanced science to map out every single microorganism living in your gut. Viome then runs this data through a powerful AI engine to determine what you should be eating to maximize your overall health, or to address specific issues such as weight loss, sleep issues, and mental clarity.

Normally a set of sheets would make a pretty lame present. But these are no ordinary sheets. Miracle Sheets are made with pure silver fibers that kill 99.9% of bacteria through a natural process called ionization. That means Miracle Sheets stays fresh three times longer than regular sheets, which means you do three times less laundry and your bed doesn’t stink. That makes them the perfect gift for that special someone who cares about reducing their carbon footprint, or who only tends to change their bedclothes twice a year.

Available in four different colors and four sizes, all Miracle Sheets come with a 30-night risk-free trial, plus free shipping and returns. Click here to order.

These days there are a number of different streaming services to choose from. However, they all offer pretty much the same kind of content. And very little of that content is intellectually stimulating or educational. That’s why John Hendricks, the founder and former CEO of Discovery Channel Communications, created Curiosity Stream. Curiosity Stream is the world’s only streaming service dedicated exclusively to nonfiction programming that deals with science, technology, nature, engineering, and history. With an emphasis on spectacular visuals and captivating storytelling, CuriosityStream's original content stars some of the most famous intellectuals and social influencers in the world, including Sir David Attenborough and the late great Stephen Hawking.

Right now you can get a one-year subscription to Curiosity Stream for just $11.99. Click here to sign up.

Most energy drinks just pump your brain full of caffeine and sugar. They make you more awake, but they don’t actually make your brain work better. That’s why the scientists at California-based Neurohacker Collective created Qualia Nootropic Energy, an all-in-one clean energy shot designed to enhance mental and athletic performance, boost memory and productivity, and promote alertness and focus. The main ingredients in Qualia Nootropic Energy are compounds called nootropics, which the brain uses as fuel for cognition. Each two-ounce shot contains 12 different nutrients that are meant to improve executive functions such as memory, creativity, and motivation.

Neurohacker’s Qualia Nootropic Energy shots come with a 100-day satisfaction guarantee. New subscribers always get 50% off their first order, plus 14% off all subsequent orders. And right now, you can get an additional 15% off with coupon code FUTURISM. Click here to order.

If you want to give that special someone a gift that will genuinely improve their quality of life, our gift guide has you covered. Forget jewelry and electronics. Instead, give them the gift of good sleep with Mellowment + Gravity CBD sleep supplements. Developed by Mellowment in collaboration with Gravity, makers of the world-famous Gravity weighted blankets, each Mellowment + Gravity gelcap contains 25mg of CBD, 1mg of melatonin, and 1 mg of chamomile. This unique formula undergoes a highly advanced nano emulsification process that essentially shrinks the active ingredients and suspends them in microscopic droplets of oil. This makes it easy for them to pass through cell walls, enhancing their overall bioavailability.

Right now you can save $10 per bottle of Mellowment + Gravity when you subscribe to monthly shipments. Click here to order.

The Blocks Come Out at Night

If you’re looking for an educational gift for a young child, you’re going to love The Blocks Come Out at Night. Written by Javier Garay and illustrated by Keenan Hopson, The Blocks Come Out at Night is the first book in a new series aimed at introducing basic STEM concepts to children in grades K to 3. In it, a sister and brother named Samantha and Roger wake up to discover that their building blocks have come alive, and have secretly traveled to Paris in order to study the City of Light’s most famous structures and recreate them in the children’s bedroom. Before long, Lloyd the Block and his friend Sonia are teaching Samantha and Roger all about the properties of various materials, the strength of shapes, and thermal expansion, along with other important subject such as geography, language, culture, and art.

The Blocks Come Out at Night uses fast-paced and engaging storytelling to teach kids cool facts and instill a broader appreciation for imagination and creativity, while simultaneously demonstrating that STEM and non-STEM subjects can be taught together in perfect harmony. Click here to order.

The next product on our gift guide involves Dune by Frank Herbert. It's one of the most popular and influential science fiction novels of all time. Set thousands of years in the future, in an interstellar feudal society in which noble houses jockey to control distribution of a drug called melange, which extends life, enhances mental abilities, and makes it possible for humans to survive hyperspace travel, Dune spawned a 1984 film by David Lynch, a 2000 miniseries by John Harrison, another film scheduled for release in 2020 by Dennis Villeneuve, and of course a popular 1979 strategy board game. Now, 40 years later, that board game has been re-released just in time for the holiday shopping seasons. Though the gameplay is fairly intricate, Dune essentially lets you scheme and wage war to gain as much control of the precious melange as possible.

Any fan of classic science fiction will totally geek out over this long-lost game. Click here to order.

If you’re looking for a game that involves a little less scheming and a lot more shouting, you’ve got to check out Spaceteam. Billed as a “fast-paced, cooperative, shouting card game,” Spaceteam was originally launched on Kickstarter back in 2015, where it raised $200,000 from 5,000 people in just 30 days. The premise of the game is simple: you and up to five other players are on a malfunctioning spaceship. Each player has five “tool cards” that represent a specific skill. “Tool cards” work on specific “malfunction cards” that are randomly drawn from a deck and represent the problems plaguing your spaceship. “Tool cards” can be passed from side to side, but never across, so your team has to figure out how to move the “tool cards” around in the time allotted before the spaceship blows up. Each Spaceteam set comes with 90 cards, a timer, a box, and, obviously, instructions.

This game has received tons of rave reviews. Click here to learn more or to order.

Last but not least on our gift guide is a product that is both near and dear to our hearts. If you know someone with a slightly dark sense of humor who enjoys satire, science and technology, and old-fashioned paper books, they’ll probably love Cartoons from Tomorrow: A Futuristic Comic Collection. Written by Luke Kingma and illustrated by Lou Patrick Mackay, Cartoons from Tomorrow is based on the popular Futurism Cartoons Instagram feed. It takes a sardonic and absurdist look at humanity’s evolving relationship with science and technology, makes half-serious predictions about what the future might look like, and occasionally stumbles upon poignant observations about some of the coolest and most terrifying things happening in our world today, from artificial intelligence and politics to environmental degradation and economics.

Cartoons from Tomorrow features 125 single-panel comics, including 80 all-new cartoons that have been seen on Instagram. Click here to order.

Read This Next
From Our Partners
Start Black Friday Off Right With A Sam's Club Membership For Just $20
Brands We Love
Cyber Monday 2019 Is Here, and These Are Futurism's Favorite Deals
Futurism
Last Minute Geeky Gifts for the Science Lover in Your Life
More on Sci-Fi Visions
What is Happening
Wednesday on the byte
Elon Musk Sets His Twitter Account to Private
From the Dept. of...
Monday on futurism
The Best Humidifiers of 2023
Human v. Giraffe
Jan 24 on the byte
Chaotic Italian Fashion Line Baffles Facial Recognition Software
READ MORE STORIES ABOUT / Sci-Fi Visions
Keep up.
Subscribe to our daily newsletter to keep in touch with the subjects shaping our future.
+Social+Newsletter
TopicsAbout UsContact Us
Copyright ©, Camden Media Inc All Rights Reserved. See our User Agreement, Privacy Policy and Data Use Policy. The material on this site may not be reproduced, distributed, transmitted, cached or otherwise used, except with prior written permission of Futurism. Articles may contain affiliate links which enable us to share in the revenue of any purchases made.
Fonts by Typekit and Monotype.