Historic Supernova Discovered: A New Bloom in the Universe 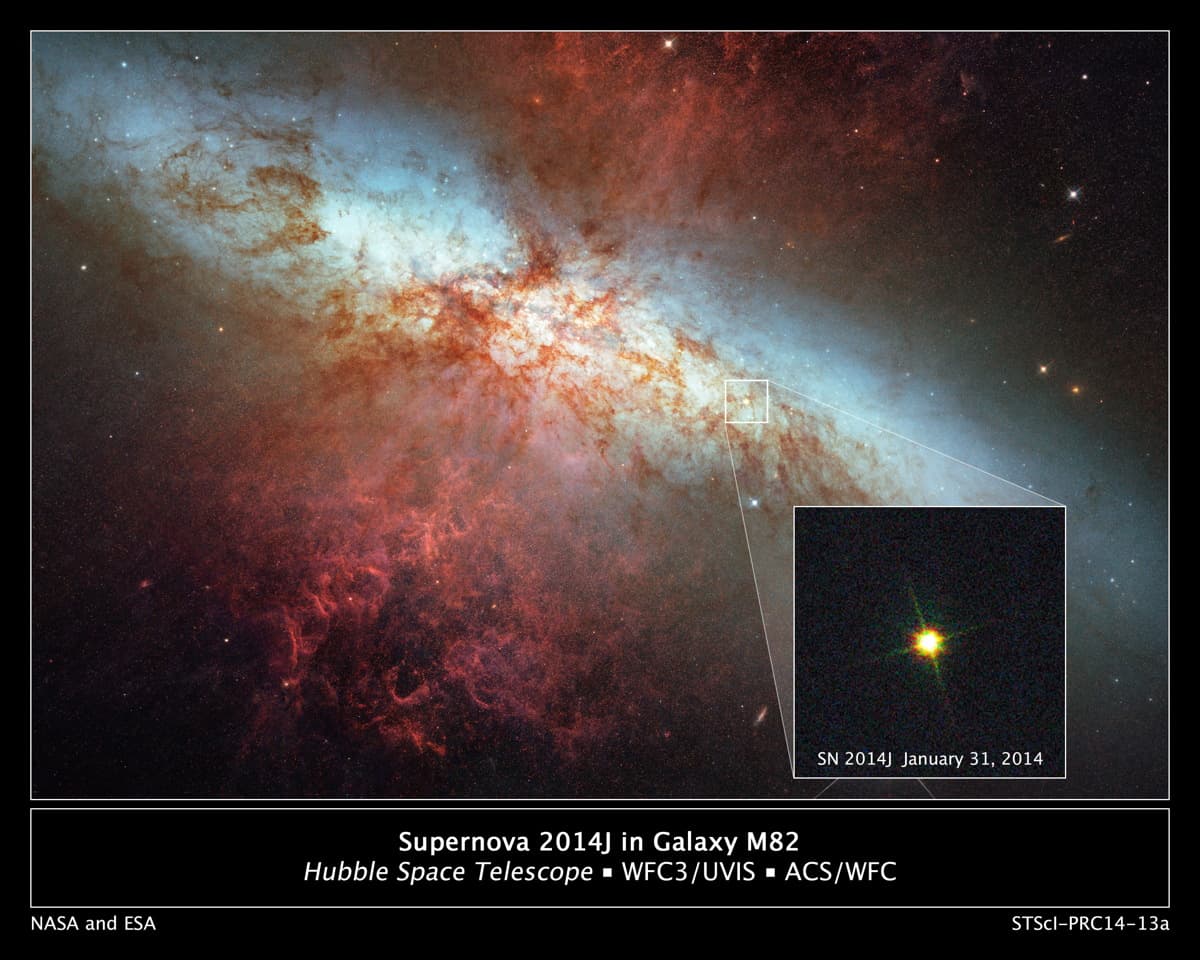 Supernovae are amazing phenomenon; they are also unfortunately rare. On average, supernova  occur in the Milky Way only three times in a century. That might not sound too infrequent, but remember that there are an estimated 100 billion stars in our galaxy. That means that each year, .00000000003% of the stars in our galaxy go supernova (that's a pretty small number).

Even worse, depending on the star's location and other contributing factors (like what lies between us the the stellar explosion), it is entirely possible that we will miss the event. In fact, scientists believe that we have missed a number of these events, as the last confirmed observation of such an explosion was in 1604 (known as Supernova 1604 or Kepler's Supernova).

But fortunately, we are able to use our technology to observe these titanic explosions in other galaxies. On Jan. 21, astronomers spotted the closest supernova in recent decades. This massive release flashed to life in the galaxy M82, which is some 11.5 million light-years from Earth For comparison, Kepler's Supernova was a mere 20,000 light-years away, which is almost right next door (astronomically speaking). The supernova was officially designated SN 2014J, and it suddenly became so bright that amateur astronomers with modest telescopes could easily pick out the stellar explosion in the night sky.

But what we were able to achieve with Hubble is a tad more impressive.

In the above image, you can clearly see the bright yellow shine of the exploded star. It may look tiny in the image, but don't let its size fool you. These explosions are as bright as 10 billion Suns. Scientists have classified SN 2014J as a Type 1a supernova, a very special kind of supernova (the brightest that there is). It is thought Type 1a supernovae are triggered by a white dwarf (a very old, small star that is the withered husk of a star that was one approximately the same size as our own Sun). Ultimately, the white dwarf reaps material from an orbiting stellar partner, accumulating material from the other star.

Then, when the accumulated mass reaches a certain threshold, the bloated white dwarf ignites a supernova.

Moreover, the point at which these stars explode is exceedingly specific, meaning that the energy release that is triggered is nearly the same for each such explosion. In this sense, Type 1a supernovae are used by astronomers as “standard candles” to measure the scale of the Universe. Ultimately. if we know the amount of energy released by this kind of supernova (and we do), then no matter where it is in the Cosmos, you can precisely measure your distance from it.

Hopefully, we will be able to witness a similar explosion in our own galaxy in the coming decades. Though this latest discovery tells us much about other galaxies, we would learn a wealth of information about the nature of supernovae from the additional data that we would be able to collect if such an event if it occurred in our own galaxy.