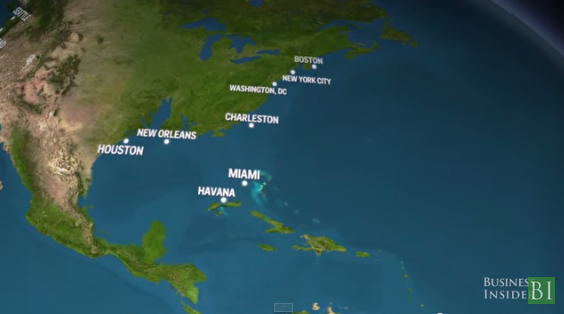 The world isn't going to boil and burn tomorrow. It's also not going to melt and drown any time soon...but it will do both eventually.

If nothing catastrophic comes along to change things (like substantially increased anthropogenic global warming, a major impact event etc.), in a few billion years, our planet will begin to die. This process will be set into motion because our sun will be starting its death throes. As it does so, it will swell to far beyond its current size. It will transition into a Red Giant, and as it transforms, it will melt our glaciers and (eventually) boil our oceans. Of course, this transition will be not-so-fun times for any life left on our planet.

It may take ages, but it is definitely coming.

So what will Earth look like when this happens? That will depend on how the Earth's tectonic plates move, how forests develop and are decimated, and human and animal migratory patters. Since that requires so much conjecture, and in order for the view to be meaningful, it makes sense to have a look at what it would look like if it happened, say, tomorrow.

And many scientists argue that, if we don't alter our course, it's where we are heading a bit sooner than we may think.

In any case, due to the way that nations develop, a number of people are living in mammoth sized coastal cities. And as the Business Insider simulation shows, those cities will be wiped from the Earth—New York, Boston, Huston, Beijing, Shanghai, Dakar, Tripoli...all of these will, one day, be underwater. Take a look at the view below for a pretty awesome rendition of what this might look like.